February 23, 2011
Recently an article in the New York Times about artist Luis Camnitzer reminded me about the phrase that used to ricochet off of bookshelves around the small press community, the "democratic multiple." It was attributed to Clive Phillpot who headed the Franklin Furnace collection, a collection of artists books produced after 1960 that was eventually integrated into a collection at MoMA Library. The website says it will "accept any multiple published by an artist as a work of art" and now lists more than 7,700 titles. When I submitted work, decades ago, the policy was that a multiple must be in an edition of 100 or more copies, which was relevant for only one of my books, A Sad Story About Chocolate. 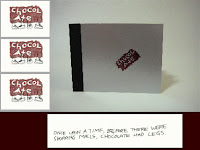 Lucy R. Lippard goes into a more detailed discussion about multiples in her essay, "Conspicuous Consumption: New Artists' Books," as does Clive Phillpot in his, "Some Contemporary Artists and Their Books" which may be found in the book Artists' Books: A Critical Anthology and Sourcebook

edited by Joan Lyons (1987. Unfortunately, out of print).

Johanna Drucker, in The Century of Artists' Books

, devotes Chapter 4 (pp. 69-91) to "The Artist's Book as a Democratic Multiple." Drucker writes that artist's books could be "an alternative artform, one which was able to exist outside of gallery or museum structures" (70). She explores the idea of the artist's book as a possibly democratic artform; the existence of many copies could mean a cheaper price for the buyer, therefore more people could afford them. She also points out that there is no guarantee that the content is accessible to everyone (thus, not democratic). In this vein of economy Drucker also takes on the notion that single copies might be inexpensive to the buyer, but that a large offset print run might be expensive to the maker.

Now we have print-on-demand services such as Blurb, Lulu, and CreateSpace where you can design your book, upload it for free, then print it out and pay for it only when you want it. It's quite astonishing to think about it in contrast to the previous form of photocopying, mimeographing, or offset printing huge editions and being stuck with the inventory. Keith Smith uses the on-demand service as a printer only; he designs a book that will be taken apart, reassembled, and hand sewn into the final work.

When you create multiples by hand you get really good at printing and/or binding. You also get to keep a copy for yourself and give away a few to friends. Additionally, you could join the thriving and enthusiastic zine community where artists and writers are still making (mostly) photocopied or laserprinted booklets and stapling them together, then converging for sales and festivals. The aesthetic for these booklets by choice, I think, is somewhat homey, but they always have soul.

Latin America has a really interesting history with multiples. In northeast Brazil, for example, there is the tradition of cordel, a little booklet that was carried from place to place to provide information to those remote regions. The texts were news stories, morality tales, or popular folk stories written in verse and included woodcuts on the covers. They were strung on a line outside markets (cordel/cord) and occasionally the writer/artist would also sing the contents as advertising. The little booklets are still being made today, mostly as amusements and entertainment, but still as one trusted news source for some poor and illiterate. Though well-known as a cordel artist, José Francisco Borges also contributed his woodcuts to illustrate the book Walking Words

by Eduardo Galeano, a publication mass-produced in a completely different way.

It is much easier to produce larger editions when you are working with a collaborator, an assistant, or a group, something I have done only rarely. A fantastic group in Cuba, Ediciones Vigia continues to make wonderful handmade books in editions of 200, which they have done since 1985. A few images are here. And an exhibit here.

Artnoose has been producing her stapled pamphlet publication Ker-bloom! in an edition of more than 300 since 1996, and it always has a colorful letterpress printed cover and thoughtful writing as well as an affordable price. (It should be noted that she has a C&P press which can print much faster than those of us with Vandercooks or Vanderclones.)

I believe that the mass-produced artist's book still has the potential to reach out and touch people, many more people than a single copy can. As with some of the publications listed above, I think that the books can still retain craftsmanship and exhibit attention to aesthetic details, can contain art while still being affordable to both maker and buyer. Perhaps it is time again to think about what kinds of texts, amusements, entertainments, satires, or information to appropriately highlight and enhance through a mass-produced physical form—a form that can inspire collaborations, new ideas, or link in to the community building that is happening in many parts of the art world today.
bookmaking