February 27, 2011
I suppose I have a preference when it comes to using other people's work in my own: I try not to do it. I'm not against all art that incorporates material appropriated from other sources, but I feel that both the challenge and the reward are greater when one works with one's own original writing and art.

Some reasons you might want to use someone else's material might come from the urge to produce a social commentary like a satire or a parody. Whether this will be deemed art is another question. For Barbara Kruger, for example, it is considered conceptual art and placed in an art context. If not done thoughtfully, appropriated imagery or text can appear lightweight, like there isn't much there. To pull it off, to really work the magic, it takes more skill than one might think. There must be an underlying criticism and social or political or psychological context in addition to the humor. There's that old subtext again.

Some terms to think about:
Satire is a social criticism meant to call attention to our vices or follies and alert us to and shame us into better behavior.
Parody is a satirical imitation of a literary or artistic work that already exists.
Irony presents a contradiction between what is said and what is meant, often in a sarcastic (mocking) or sardonic (disdainful or skeptical) manner.

Additionally, if one is to use appropriated material, fair use copyright issues should be studied. This list is simplified from a link on the Electronic Frontier Foundation website. I urge you to read the original.


While I don't use appropriated material in my books, I occasionally using quoted work when I produce letterpress cards or free keepsakes. Often this happens because something ironic or delightful appears in a newspaper article and I can't top it, I just want to share it.

For the most part, though, I feel that one can look to other works for inspiration, but respond to them in one's own original voice. 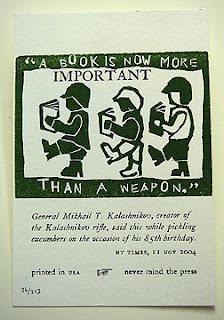