In the Heart of the Story

wrote an inspiring modular short story called, "In the Heart of the Heart of the Country," which faithfully squeezes the hands, so to speak, of emotion, concept, connected themes, and beautiful writing. Three of us fellow students concurred that the piece itself had "heart." I'm not sure where the term came from, but we started wondering about heart in fiction. We wondered how to achieve this emotional depth, warmth, or whatever it is in our own work.

Gass uses "heart of the country" to mean the town "B" in Indiana, the heartland. The "in the heart" itself refers to the narrator's heart. The narrator speaks with both warmth and despair, (and possibly bitterness) about his town and also about his past love, the concept of the heart doubles back on itself, folded silkily. The reader learns to care about the town, to care about the characters.

One thought might be to create a character that is vulnerable in some way. Gass's narrator seems to suffer a loss of his love. He doesn't get all teary-eyed over it, he just describes the situation. We don't feel he is feeling sorry for himself, but we feel sorry for him, perhaps injecting our own experiences of lost love,


"…for I'm the sort now in the fool's position of having love left over which I'd like to lose; what good is it now to me, candy ungiven after Halloween?"

From the next comment we can tell that the narrator feels strongly about things, "These wires offend me." But the telephone wires are not alive, they are just wires. A few pages later he reinforces his passion and makes his intention clearer and more understandable,


"Really, wires are voices in thin strips. They are words wound in cables. Bars of connection."

He makes the connection between wires and humans, and thus the connection to our humanity. Gass also writes of the "headless maples" that were cut off so as not to interfere with the power lines, and with his use of the word "headless" we feel the life cut short in those trees. These particular examples suggest that having a character care for something is an entry point. A character with no loves or hates may read as cold. If the reader somehow identifies with the character, and the character loves something, it is possible the reader may also care.

Gass also describes, with feeling, other fictional objects that correspond to tangible, real things with which we can identify. He chooses his words carefully with attention to the images they conjure. The language that Gass uses points to a cozy relationship with the place that "always puts its best side to the highway."

By showing a character's own strong feelings and vulnerability, by using a particular kind of language which reveals his thought process, Gass tugs us in. The story, "In the Heart of the Heart of the Country" was written in 1967, but it still resonates with us emotionally because of the heart held within it.


"The heart, don't they always say, keeps the true time." 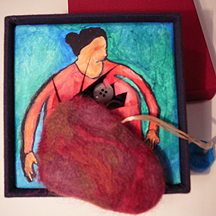