May 19, 2011
I picked up a copy of What shall we do without us?: The Voice and Vision of Kenneth Patchen in the late 1980s, knowing nothing about Patchen or about his art. This book turned out to be a posthumous collection of his work with a long, intriguing afterword by James Laughlin, Patchen's publisher at New Directions (and, coincidentally, Nabokov's publisher). As I thumbed through the oversize posterlike pictures I realized that writing and painting were connected for him. He used one brush for handwriting and for imagery. I don't think he felt the division between word and picture: they were the same.

The cover of What shall we do without us? is a cropped painted poem (no words), showing us two creative characters, but the full painting inside says (in white) "All      at once     is what eternity is" with additional characters intermingling with the words. The background peeks out, once colorful, now overpainted with gray. The imaginary characters are bright yellows, oranges, and greens. It seems simple, but the images and words take us into a surreal world, suspended: eternity.

It is always a challenge to work with both words and images. How to balance them so that one doesn't dominate? Patchen used mostly cursive writing, which makes the viewer work a little harder, helping to balance the tendency to read first, then look. The writing is also in color, not the standard black ink we are used to (except in the old publications!). The imagery is imaginative, curious, sometimes containing animals of his own devising. The colors are bold and lively, a world that draws us in. Text and image are interwoven and integrated. Nothing feels stuck on or added randomly. Short poems work well on one page. In the 1940s due to the prohibitive cost of having a fine-print edition of his work printed Patchen painted his own book covers, which inspired him to continue doing so for eight more books. Over his lifetime he painted, screenprinted, and used collage methods for his painted poems. He seemed to like pushing boundaries, and if he had been a book artist today he might have tried out longer poems in sequence, using repetition and visual cues to remind us what was painted previously or maybe experimented with book structures as well.

Who was he? Briefly, Patchen was born in 1911 in Niles, Ohio (today, about an hour drive from Cleveland). He grew up poor, played football and worked in a factory. He went to various colleges, including the University of Wisconsin, and took jobs as a migrant worker. In 1933 he met Miriam Oikemus; they were married in 1934 and they lived in New York, San Francisco, and Concord Massachusetts, among other places. He suffered a back injury when he was 26 and was in pain, later unable to leave his bed for long periods, but he continued to write and make art until he died in 1972. In the Special Collections Department, University Library, at the University of California at Santa Cruz you can find the Kenneth Patchen Archive. Many of his books of poetry are still available; a new compilation called We Meet 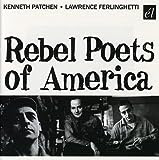 I don't hear much about Kenneth Patchen these days. It may be hard to take him out of the context of the 1930s through the 70s of his life: his interest in jazz, his collaboration with John Cage (a radioplay in 1942 called "The City Wears a Slouch Hat"), his friendship with Henry Miller and others. Today he might have enjoyed the politics and aesthetics of graffiti, but his style of freeflowing painting and merging of art and writing in painted poems feels rooted to those earlier times. I was pleased to find, however, at the recent launching of the San Francisco State University Poetry Center Digital Archive, that Patchen was among the first batch of time capsules released, reading from his book

When We Were Here Together. You can also hear him read (a very short poem) with jazz music here. Granted, the first recording is from 1957 and has the reading sound from the time period, but I was moved hearing his voice come alive.
art artist bookmaking collage writer/artist

Kelly Kilmer said…
Thank you for writing about Patchen. I find his work fascinating. I have several of his books. I was first introduced to his work after seeing one of his books just tossed on top of a table at a bookstore that was going out of business. The owner said that he was a bit hesitant to sell it as Patchen was his favorite artist but as long as I gave it a good home, he'd be okay with it. Not only did I give it a good home, but I went out and bought every Patchen book that I could get my hands on.
May 19, 2011 at 11:29 AM

barts said…
Lovely piece on Patchen. I like especially thinking of him working with the same brush in words and image, that he didn't see a difference between enterprises. He took a workingman's approach to creativity and was rewarded with a constant fluency. I think he has a pretty strong cult following for an artist who's been dead for nearly 40 years.
May 19, 2011 at 5:08 PM

Velma Bolyard said…
seems like we find patchen in odd ways--mine at a used bookstore, purchased for my son and on second thought, kept for myself. there may be poems in the finding--
July 11, 2011 at 11:32 AM