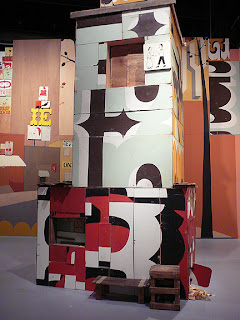 It is an interesting feeling to walk into a room and find that the art is solid and grounded, and that the work has many deep roots, connected both downward and outward. I am sorry I never met Margaret Kilgallen because her art evokes that feeling for me. I saw her work at the Art in the Streets graffiti show at LA MOCA and didn't know and later couldn't even remember her name, but I knew I needed to find out.

I was drawn to her work immediately because the lettering resembled old wood display type. At the time, I wondered if these were salvaged signs made into sculpture, but soon learned she had painted them all new, herself. It was uncanny. Who was she and why were these giant letters, clearly made with historical knowledge and research, in a graffiti show? I wanted to understand her story from the letterpress and bookmaking angle, if there was one.

And there was. She studied printmaking and learned letterpress at Colorado College (BFA, 1989) from Jim Trissel and later worked in a letterpress shop and as a bookbinder for the San Francisco Public Library in 1990, after volunteering for awhile. She was interested in fifteenth and sixteenth century letterforms as well. At SFPL she met Daniel Flanagan and from him learned more about book conservation and how to repair paper, which is likely why some of her paintings are on discarded book pages. She painted on gallery walls and on outside walls in the Mission district. Margaret Kilgallen and several others were dubbed as part of the Mission School of art because of their geographic location, their new approach, and their subject matter: graffiti, skateboards, surfing, trains. 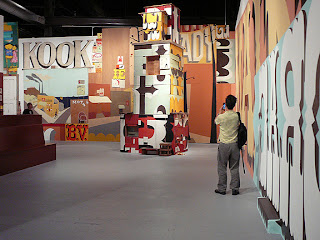 Additionally, Kilgallen depicted "strong women," particularly unknown or formerly invisible ones such as: Fanny Durack, an Australian swimmer who was the first woman to win an Olympic gold medal; Matokie Slaughter, the first woman banjo player she heard on an Old Time record; Algia Mae Hinton, who played guitar and buckdanced;  Kathleen Hanna, rock star. An extremely wonderful (and well-made) book, published in 2005 that has many full-color plates, two essays and excerpts from an interview with her is Margaret Kilgallen: In the Sweet Bye & Bye (available through Giant Robot). She says, "I don't like to choose people that everybody knows. I like to choose people who just do small things and yet somehow they hit me in my heart" (120-121). Many of the words Kilgallen painted were these women's names.

She was connected to other women artists such as Ann Hamilton and Ann Chamberlain, with whom she worked as they installed their incredible project at SFPL at Civic Center in 1996: 50,000 altered catalogue cards inset into the walls. You can see two of Kilgallen's 'zines (both from approximately 1998): "Nellie was there" and "Fly by Night," in the library's own Little Maga/Zine collection. Books and type continued to interest her even as she painted. 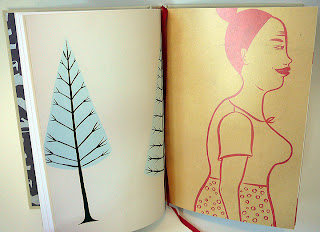 In  a video interview here, Daniel Flanagan, currently a book conservator for the California State Library, notes that the bottoms of her painted trees look like the serifs at the bottom of letterforms. She liked what he calls "vernacular typography:" handpainted signwork, posters "that were printed, really, using wood type."(minute 5:30) Her work is also rooted in Japanese woodblock prints and Asian calligraphy, where the artist/writer used one brush for both writing and painting.

Kilgallen says of Flanagan, "He taught me to work with the flow of the hand. If you're sewing a book, you don't stop…because by having that flow… it will show, and your work will come out better" (118). The flow does show in her paintings; it is hard to tell where lines begin or end. She always painted by hand, going over and over the lines, never projecting the letters or using stencils. This practice, this attention to detail, put the movements and marks inside her body, ready when she needed them. 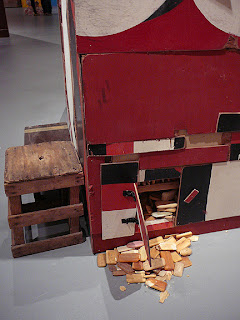 The source of this installation: when she was on a surfing trip to Mexico she saw shacks made of billboards, which inspired her try making them herself (66-67).

Part of the essence of her art, the impulse behind it, was her dislike of being constantly being bombarded by inane subject matter, particularly from billboards. Countering this irritation, she presented her own symbols and vocabulary, all created by hand. In addition to the big wall paintings, she stitched together small paper paintings into larger, quilt-toplike forms or hung many framed works close together, a bombardment of her own style. She says, "We completely block it [advertising] out as if we don't see it, but for some reason we don't think of it as garbage…That's like mind garbage…people might want to put their own visuals—graffiti—in their own neighborhood, something that they could relate to" (123-124).

She sounded like she cared deeply for her work, for people, for the world. "She was always leaving out half her sandwich for whoever might want it,"  says Flanagan (10:48).

You can find out more about Kilgallen from an essay by Aaron Rose as well as through photographs of her work in Beautiful Losers: Contemporary Art and Street Culture, which is both a book and a video. You can see some long excerpts on YouTube. A good video, an excerpt from the PBS series is Art21: Art in the Twenty-First Century, which captures Kilgallen, her work, and her philosophy. The following is a short clip to give you an idea.

Margaret Kilgallen died of complications from breast cancer in 2001, at age 33, three weeks after her daughter was born. Her husband, artist Barry McGee, and her daughter Asha Kilgallen-McGee carry on. 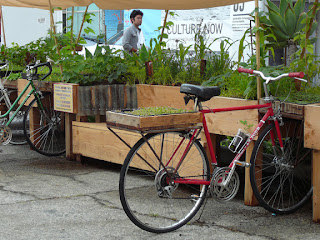 July 2011, outside MOCA, someone had installed this tribute to her—a bicycle garden. I discovered later that it was instigated by Randall Poster and Aaron Rose. The handlettered beige sign in light blue, black, and warm red (by the green bike) reads: This Mobile Bike Farm at MOCA / is Dedicated to the Memory of Artist / Margaret Kilgallen / (1967-2001) / Designed By: Futurefarmers / Tended By: Silver Lake Farms / Presented by Wild Goodness and Levi's Film Workshop.


Margaret Kilgallen stretches and reaches out and through her artistic roots to us. Grow, art, grow.
art artist creative process library sign

Linda said…
Hi Alisa, I tried to leave a comment previous but I guess I didn't get it right...? I loved this blog very much. I learned a lot about an artist I didn't know about and became "invested" in what you wrote because I enjoyed experiencing a great depth of feeling and regard for Margaret Kilgallen based on your research and writing. Thank you so much for introducing me to her! Linda
September 8, 2011 at 11:58 PM

babylady inc. said…
Hello there, thank you for your insight and research on Margaret Kilgallen. I have been researching her all night because (and i thought you would appreciate this) while my husband and I were packing today (we're moving) I came across a blank sketch book with his name on the cover in gold leafing. I asked him why he never used it and he said it was because someone, an artist, made it for him and that he felt that his doodles were not worthy. Anyway, it was made for him by Margaret, she signed it 'META' - her graffiti tag. And it is a beautifully made book, clearly made with thought and care. Anyway, thanks for sharing!
December 26, 2012 at 8:46 PM

Alisa said…
What a wonderful story! Beautiful blank books are so hard to write in anyway, but doodling in it would be an honor to her memory, I think. Thank you for sharing as well.
December 27, 2012 at 7:47 AM