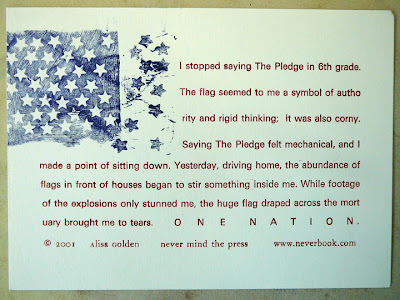 I was moved to print this card the second week of September, 2001. Here in the United States we had suffered a tragedy together which caused us to be kinder to one another…for a little while. There's a big to-do over this, the tenth anniversary, a look at how we were changed, memories of the event, memorials of those who died. But what is even more heartbreaking to me is that ten years later we really are back to "authority and rigid thinking." We aren't working together to make our world or anyone else's a better place to live. On September 1, President Obama and Speaker of the House John Boehner were in disagreement over the "date and time of the president's much-awaited speech" about increasing jobs and fixing the economy. Really? One nation…divided again.

We really should remember.

Bhavna Mehta said…
Thank you Alisa - your post brought me to tears. Its hard to feel connected to anything like ONE NATION when so many of our actions around the world are splitting people apart.
September 11, 2011 at 4:42 PM

Mary said…
The hyper-partisanship on display recently is beyond frustrating. Compromise is a dirty word.
September 15, 2011 at 9:33 AM