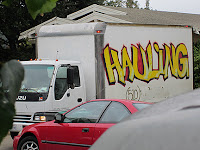 The art on the street keeps moving. A white truck idles in a driveway with the word “Hauling” painted on it, graffiti-style. Around the corner, the little bulldozer continues taking down the green house, making way for a garden. The red concrete steps are still there, leftover after the party, waiting for a ride home. I walk past the house, up the perpendicular street and turn left; the path becomes leafy and winding. Sometimes, the deer startle me and are startled by me in the foggy mornings as I march on up, but there are only birds and gardeners today. Almost at the top, one street turns into another at the cobblestone path where I often turn my ankle, so I cross the street before I get there. Here, the numbers change, seeming like centuries: down, the 500s; up, the 1800s. Someone has spraypainted a face on a discarded wheeled wooden crate out at the curb. I think it is cheerful. 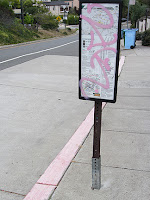 Up at the top of the hill, new pink graffiti matches the faded red curb and adorns the glass-faced bus stop map. It possible that the rare woman tagger paints in pink to be seen. Past the pink graffiti, a wooden fence sports multicolored chalk marks, mostly vertical lines in rows and overlapping, clearly done by children, likely who live there, likely given permission. Similar affirmations, a block apart.
At the rock park, a half -dozen sixty-year-olds are standing around something I don’t recognize. A smallish, maybe three-foot square concrete pad with one step has been installed as a kind of pedestal to an enormous concrete urn. A man with a tape measure is gesturing and looking at it. A woman with a canvas hat on a cord keeps putting her palm on the urn as he talks and taking it off again. The urn is man-sized.
Down and around, past the garden with the cattails, past the newly landscaped yard is the twin urn. Identical. Separated at birth? On the one hand I want a little plaque at the rock park, explaining, on the other, placing new concrete next to the ancient rock seems like vandalism. I heard that those little plaques are urban graffiti for the rich. The walls of both urns are plain and blank. 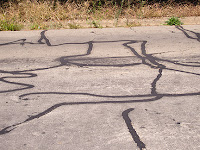 Down near the demolition site again, the corner smells of camphor chips, a reminder of the newly removed tree. Diagonally across the street, most of the green house is gone. The red front steps are abandoned and cracked now in pieces. I can clearly see the peach-colored house and the gray-blue house flanking the lot. The green house isn’t a house anymore.
Farther south, down this street, eleven cardboard boxes are neatly stacked in three columns on the parking strip. Two Asian men are having a conversation a few feet away. The shorter, older man holds a box under his arm while he talks. He looks like he has forgotten he is holding the box. The printing on the boxes says: MYTEK / Lab Coats / Color: DK BLU / SIZE: XL. I wonder what sort of protection they offer.
In the late evening, I go back to the lot where the house once was. Everything is gone, even the red steps. It is leveled. A new canvas, waiting. Except this one is framed with a fence. 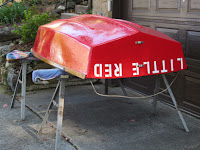 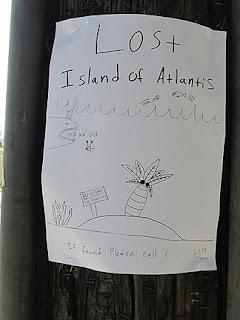 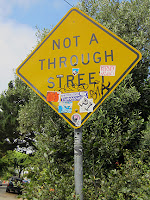 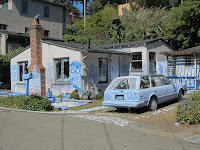