January 11, 2012
The blank pages are ready to be transformed. The mix of green makes it looks like the theme might be camouflage, but I'm going with cacti. I've been carrying the pages around with me and studying them, looking for forms, shapes, whatever emerges: two people in one, a cactus garden in another. I'd like to think of a place I want to start and where I'd like to end, otherwise this book will most likely just end up random. Sometimes I can trust the process to resolve itself intuitively, but I'm not feeling confident about this today. I think the title will be Cactus Couple and I have an idea for a short text of one line. I'm going to machine stitch the outlines of the images first, though, like quilting. I have a feeling I'm abandoning my start and end ideas and seeing where the images take me, after all. This sewing step, the finding of the forms, is optional, but it helps me get going.

Tools: sewing machine with a walking presser foot (you can see one below and here); sharp pointy scissors; spool of all-purpose thread and a bobbin of thread (these can be different colors for an interesting effect). Sulky makes an interesting multicolored thread.

The walking presser foot makes it easier to sew into the felt. Even so, you will still need to leave the needle down and unclamp the foot, swivel the fabric, then clamp the foot again to turn tight corners or to change directions.

Regarding the thread ends: I try to sew all my outlines with a single line, which means I only have two places with loose threads: beginning and end, or point A and point B. You may leave long thread ends or cut them short. The sewing generally stays in place whether you tie knots at the ends or not. You will see a thread from the needle on one side of the fabric and a thread from the bobbin on the other side. You can pull both threads to one side of the fabric by pulling on one thread until you see the loop pop up from the other, then coaxing the loop through and straightening out that second thread. Tie off the pair of threads in a square knot. 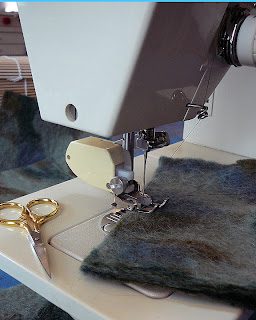 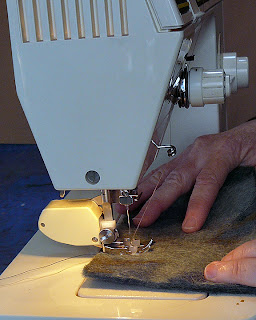 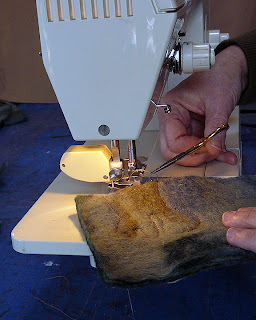 Next up: Needlefelting the Details