January 09, 2012
If a tree falls online and no one is there to hear it, does it make a sound? I imagine someone has posted a tree, perhaps a video of a tree, somewhere, but I can't recall having seen one. So, I suppose it does not make  noise for me, but I haven't walked that way, yet, plus I usually keep my computer mute.

Just as we wonder who will see and experience the handmade books in our libraries and galleries,we may wonder who will see and interact with the book art hidden in the forest on the web. In a talk given by Alexander Mouton, Assistant Professor of Digital Art & Design, Seattle University at the College Book Art Association Conference on January 6, 2012, Mouton showed several exciting digital works that had the qualities of bookworks. This is Not A Poem by Alan Bigelow absolutely captivated me. The website describes the piece as a "toy, a game, and a language engine." Bigelow starts with a poem with which we are familiar "I think that I shall never see / A poem lovely as a tree" by Joyce Kilmer. It is set in a circle, which begins to spin like a record. Instead of describing it further, I would recommend taking a look, or rather, a play. The only hint I will give is to mouse both around and through the poem. It may not be a poem anymore in the conventional sense, but Mouton suggested that it is a digital book. No trees were harmed in the making of it.

It has notable booklike characteristics:

With the exception of sound, it sounds like a book to me. It has the potential to reach a very wide audience, but only if readers know where to find it. A second interactive story of Bigelow's that I found equally compelling while exploring his website was The Quick Brown Fox: A Pangram. Another bookwork Mouton showed is called Life Is Like Water by Peter Horvath, but I was unable to access it at home. Horvath makes use of the pop-up window and the titling becomes the text: familiar visual computer language transformed into art or electronic literature. I suppose I do not really care what it is called, I am interested in what it does. 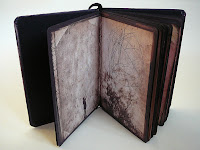 I would still like to have a tactile component available with these web pieces, much the way the musicians Jónsi & Alex made a little book Riceboy Sleeps to accompany their music and video (available now as a pdf download only). Their book alone is mysterious and interesting, rich with allusions to childhood memories and dreams, familiar textures, pencil lines, crumpled paper and lace. It contains no text, only a card at the end with a website. The original website is gone, sadly—I say sadly because it, too, was satisfying on its own. Something exciting occurred when you went back to look at the book after seeing the little videos (All the Big Trees and Daníell in the Sea): by having listened to the music and having read some of the text you overlaid your new knowledge on the object. Adding the memories of the new pictures and music, the little book changed dynamically: pictures moved, sounds occurred but only in your mind.

The fact that half of this initial experience doesn't exist anymore brings up the problem of archivability. Similarly, any works built in Flash cannot be seen on the current technology, the iPad. On the archival scale, the physical object still wins. The interaction between object and online fascinates me and I hope to be able to have more of this type of experience in the future, but perhaps continued technological research must be done first so that the art won't vanish.

In addition to the issue of longevity, I realized that the problem with many interactive sites (and even books presented as games) is that if the reader has to be instructed s/he may not want to bother. What is the payoff? It had better be really good. I am glad that neither the book nor the website, like the Bigelow site, had many directions. I know that I want to be immersed immediately in the artwork, that I don't have much patience for the preface. The work should be both clear, but invite curiosity. The reader wants to feel that s/he has uncovered a secret, that maybe s/he is the first to notice a detail or how something works, rather than be told what to do or how to do it. User interface is the key to success here, like any other interactive project. The reader wants to be invited into a party where the party is happening but not told exactly what to wear, what to eat and to whom to talk.

That tree? I'm thinking about a webcam now, trained on a tree; I'm searching for it, but I'm not finding it. Maybe it is gone. Maybe it was never there. So many trees, so many videos, so many websites. So much art to read. So many pebbles, petals, leaves out in the physical world we don't see or hear, and they are certainly there. Someone—if only an ant or a bee—is listening. 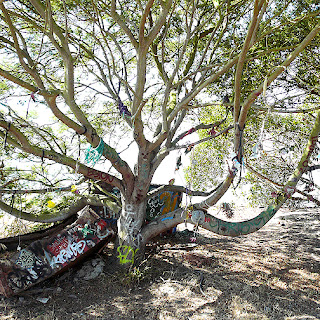 Unknown said…
Alisa, so enjoyed this post and links to creatives that I had not seen or heard before. Liked the little cookbook pdf at Jonsi and Alex!
January 9, 2012 at 10:16 AM

alan bigelow said…
Thanks very much for this detailed and thoughtful commentary. I very much appreciate it!
January 14, 2012 at 8:51 AM