December 10, 2013
You see them everywhere: personal challenges to do something every day for a year. In 2002, my friend and longtime book arts colleague Michael Henninger took a picture of his baby's first 365 days called Oscar 365. (He said he wasn't always able to get a picture so there are a few blank spaces.) Search for 365 projects and find websites devoted to a photos, collages, drawings, writing, your success of the day and many, many more (say those last four words in your best announcer's voice.) It's a discipline, and it could be gratifying, but I have never been able to sustain interest in doing one kind of thing every day for a year. And I have tried.

I can see that if you drew a turnip every day for a year you would get really good at drawing turnips, know turnips intimately. I mean this. So after twice declining the 2014 datebook that someone offered me and watching two other people reject the book, I paused and reconsidered. Look at the nice blank rectangle for each day! Big enough for a twitter-sized story, a haiku, a tiny collage, a thought, a drawing, a fortune from a cookie. The LED bulb over my head went on: I don't have to do the same thing every day for this challenge, I could experiment, just spend a few minutes thinking and making something that would not be for sale, a gift, or for anything or anyone. Maybe it would be a meditation, a way to center myself. And so I took the book. 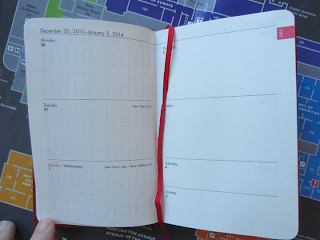 But I was still curious what sustains someone to continue and complete a daily project. I remembered that Marc Pandone, an artist in Napa, California, once did a beautiful pastel drawing of the same landscape every day. He continued for one hundred days, echoing Hokusai's famous "One Hundred Views of Mt. Fuji." I asked him what he was thinking about when he started "Buzzard Peak Observed."

He told me: "At the beginning of 1998, my Sabbatical started spring term, and I took a full year off. I had no plan, I just had to get up there and start drawing—this was the view out the studio from my deck—I had to see how far it would go—certainly Mt. Fuji was in my head." He prepared about six sheets of paper, got started, and after a few days he decided, "This is what I'm doing." His life became intense as the days revolved around the drawings; he stayed home, only running errands at a time when the light or weather didn't seem right to draw. It was a rainy year. Marc began counting on the varieties of clouds and rain to change the view.

What began as a warmup or re-entry into his drawing practice turned into a "study of clouds, sky, fog, cold, some snow on the hills…an observation of a place over time." It took on more meaning than he had expected. And it turned out to be more about sky than about land.

At the time, he was also "doing collaborative teaching with some writing instructors," which inspired him to keep an accompanying journal. It was a fairly spare document, describing things that weren't in the pictures. The words described things he didn't draw or that weren't possible to draw such as: "titles, phrases…juncos, cows, gunshots, temperature, wind."

When I asked if he ever got to a point where he thought he wouldn't continue he said that one hundred days—"the Fuji thing—was the target." He wanted to hang in there and keep at it, but "maybe 23-24 days before the end, a bunch of clear weather happened, a bunch of very clear blue sky." And he felt that he would not be interested in drawing the hill with blue above it, that he would be "losing the sense of the drama, the challenge, if there wasn't a shape in the sky to interact with the land. The clouds were exciting to draw." Some of those drawings are diptychs, comparing two different times of day.


Marc told me he usually isn't good at getting into the studio every day, which is fine with him. But in the end, he learned from the strict schedule. He said, "It taught me a lot about wrestling with it, unwrapping it, making something beautiful, poetic." And he wanted to try "getting in the damn studio after years of not doing that kind of daily regiment and practice." 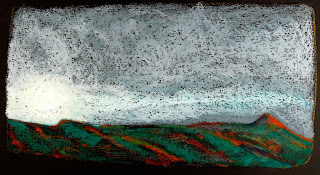 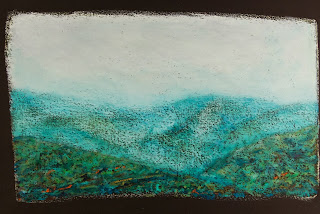 1/10/98   −9am, .5” rain, light showers continue, mild temperatures.  Clouds cascade down the canyon as if a Robert Ryman painting is dissolving into obscure land forms. 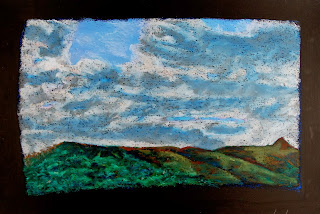 1/22/98  -The front of clouds moves in at mid-day and lingers.  The jetliners engines obscure the crow’s call and flaps of its wings as both pass, miles apart, in unison. 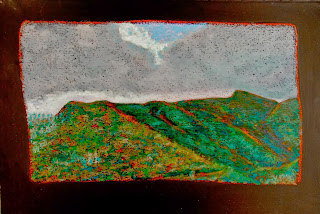 1/27/98  −8:30am, .6” rain, blue sky, springlike temperatures, songbirds feed in morning fog. Cattle across the canyon were scattered along the road.
While mending the fence, Herb Green, who is 84 years old, reflected on the cow’s ability to push through strands of barbed wire and how calves get separated  from their mothers. 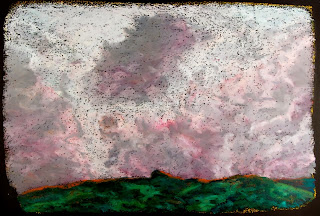 4/4/98    −8:30am, .6” rain, heavy showers last evening, grasses tall and soaked, lupin and poppy crowd the slope below the house.  Fidgety finches rustle in  the branches like Merce Cunningham dancers 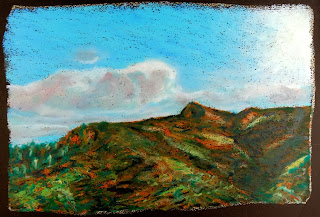 4/10/98    Last entry:
100 days of drawing, Good Friday. On this 100th day- Wendy, Lisa and I climbed Buzzard Peak.  We followed the stream, walking along the old Napa Monticello Road, across the abandoned bridge with the 1930’s cornerstone, through the first cattle fence.  At the lake shore we traversed a meadow through a second cattle fence and reached the dirt road which winds its way up the ridge.  Thick gray clouds passed quickly as we ultimately reached the top.  A shower of rain baptized us with chilled moisture upon our sweaty clothes. Tired, we huddled against volcanic rocks looking down the canyon toward our house and studio.  A fitting perspective and moment of reflection.

Just starting something new, anything at all, can lead to other projects that you might not have gotten to or discovered otherwise. My new datebook begins with December 30, 2013 and ends January 5, 2015. There is a little pocket in the back for collecting ephemera, if I like. In this digital age, if someone gives you a paper datebook for the New Year, I hope you'll join me in filling in the days. I still don't know if I can stay interested in it, but I'm curious where it might lead.

Lucia Sasaki said…
Hi Alisa!
Thanks so much for this post. It is so good to see that someone is seeing ahead from Christmas festivities. I liked very much your sharing of Marc Pandone's artwork. It is so beautiful and inspiring.
Thanks again!!
December 10, 2013 at 8:29 AM

Wendy said…
I think Pandone has coined a new phrase -- "The Fuji Thing". I thought it deserved a definition:

The Fuji Thing -- Pursuing an endeavor to a pre-determined point in time regardless of motivation or state of "flow". What ensues is process, or the nebulous product of intrinsic motivation.

This is my first introduction to your website Alisa. It's a lovely entry, and a magnificent project.

Alisa said…
Welcome, Wendy!
Thanks for your definition. It quickly gets us thinking about how and why we as artists might choose to discipline ourselves.
December 11, 2013 at 11:07 AM

Good luck with this project.

Coincidentally a gallery in Sheffield is holding an exhibition next year about a similar project involving 365 drawings. Here's the web address of the gallery, who have just hosted the 4th Sheffield International Artists book Prize, http://bankstreetarts.com/. On this site is a link to the artist's blog showing the drawings.

By the way now bought 'Painted Paper' and having brilliant fun painting paper! You've inspired me, thank you.