May 27, 2014
I missed the first showing at San Francisco Art Institute last fall, but was coincidentally able to catch Energy That Is All Around: Mission School during its second showing, this one held at the Grey Art Gallery, New York University. The show featured work from Margaret Kilgallen and Chris Johanson, two artists whose work inspires me, plus Barry McGee, whose work interests me in a different way, Ruby Neri, who I heard taught a painting class at CCA last semester, and Alicia McCarthy, whose work I didn't know at all. All but Kilgallen were students at The San Francisco Art Institute in the 1990s, but they all shared space, walls, the city, the Mission district (such as Clarion Alley that I've written about), and friendship. 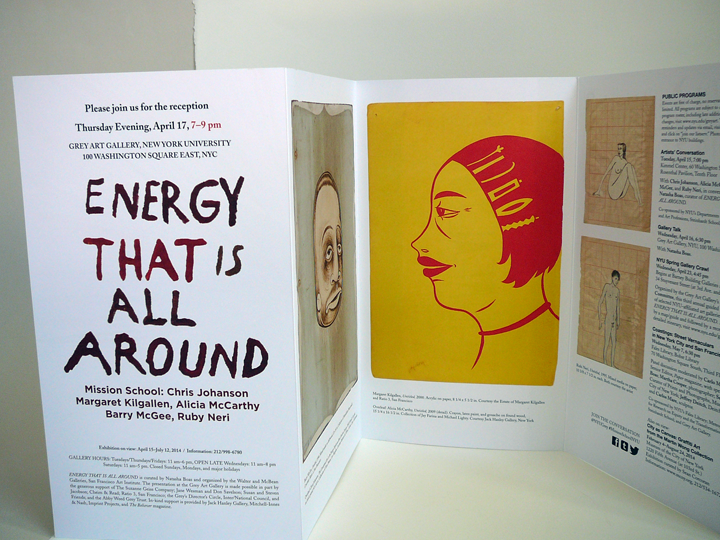 The work, although presented well, was surprisingly disappointing to me, and I have generally been a fan. Johanson's early work that is shown, for example, is monochromatic. His current work is full of bright colors, texts and images and thought balloons all distinctive, which is as much a part of the appeal as well as the thoughtful and humorous content, which has remained constant. You can see all of the artists'  skills and visions being developed, some not yet fully formed, some more technically advanced.

It is the friendship that comes to the foreground in this exhibit,  the community that is the most interesting part of the show. In one vitrine there are two separate letters from the administration at SFAI, one to Alicia and one to Ruby, that tell them of complaints by neighbors about noise and graffiti (vandalism) in the studio and in the neighborhood, and warn them if they don't shape up they will be shipped out. The letters are displayed side by side, sharing both ideology and space, showing how the artists themselves were working side by side.

According to the exhibit notes, the work was arranged in the vitrines collaboratively by the artists themselves. The walls are mixed groupings, not separated by artist. The artists also included announcements for group shows and other ephemera. It would have been nice to have the focus of the show underscored a bit better, whether by artist, chronology, or subject, and perhaps honed even further. Sometimes missing in group shows is the narrative in identifiable terms: the story of how they met, why they gravitated toward each other, what their friendships meant to them, where they are now.

(If you go, pick up a copy of those notes if you want to identify who did what when and what the titles are. There is quite a lot to absorb.) 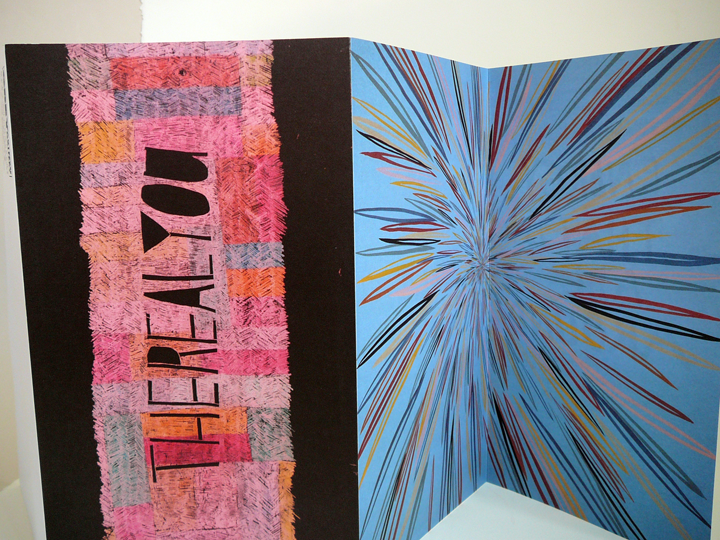 McCarthy, Johanson This Conceptual Art Is An Energy Explosion About Positive Energy (detail)
2009, 2002

Although many of the works by the different artists are hung together, each artist had a unique style. McGee's has sad sack characters, Kilgallen's drew from pioneering women in unusual fields (surfing, banjo playing, etc.) and letterforms, Neri did horses and figures and ceramics, McCarthy created colorful abstracts (called "urban rustic" by this website), and Johanson's are crowded with figures and writing. They shared certain social concerns, but I didn't  see much influence, one to the other artistically, like I saw in the Robert Duncan and Jess show and their circle of friends. In the Duncan and Jess exhibit, it was obvious that the couple opened their home to artists, writers, and visitors, and the viewers felt invited in as well. Unlike that show, the romantic world of the Mission School felt closed to outsiders. But it definitely felt romantic. And a bit wistful. Not as edgy or as hard hitting as it was originally meant to be.

The text for the exhibit says "It focuses on rarely seen early work," which may or may not be a good thing. And I had to remember that this—with the exception of a dozen or couple dozen pieces—was student work. It makes sense that it is being shown in the gallery of a school. The work is accessible as early art can be; students may feel it is within their grasp to work like this, or perhaps better. This is a show that documents a time, a group of friends, and a creative process. And it is interesting for those documentary reasons. From an art standpoint you can see some strong pieces, but they are diluted by the quantity overall.

Later in the day, we were also able to get to MOMA, and in addition to the Gauguin showing of woodcuts and monotypes, we saw work from 1963-2010 by German artist Sigmar Polke, a contemporary of Gerhard Richter, Joseph Beuys and Dieter Roth. We were struck by how similar his sensibilities were to the Mission School artists regarding materialism, social commentary, and "human concerns," but how it contained many more layers of both material and culture from the past as well as what was happening at the time. Edgy done well, but it was also more mature work. Some of the outstanding pieces were printed cloth attached to the canvas, then painted over and stained, with popular comic characters painted over all. Most hilarious was seeing this work with commercial cloth made of a repeating Gauguin motif. High, low, irreverent, and funny.

Back outside the gallery on the NYU campus, adding to the energy, was this. 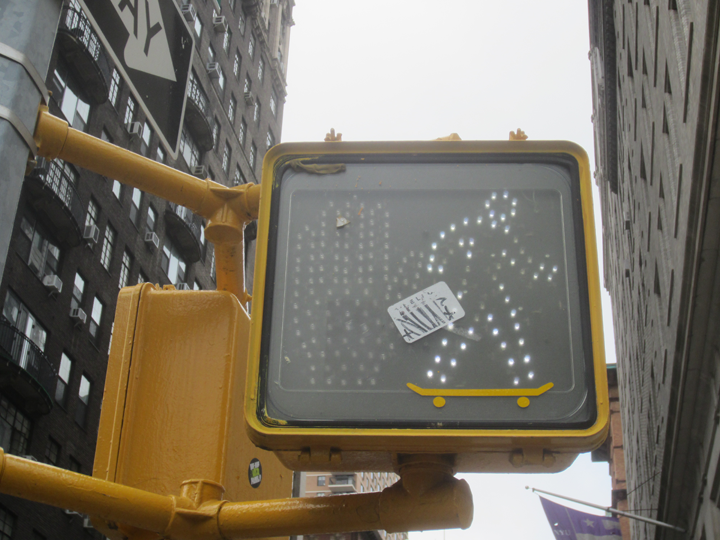 It was certainly in keeping with the idea of street art for everyday folk.

Energy That Is All Around is on view at the Grey Art Gallery until July 12, 2014.
art artist exhibit museum