July 06, 2014
Gomphrena. I just met a plant named gomphrena. I've walked by this plant every day for weeks? months? But it took another pair of eyes to call my attention to it.

My neighbor tends the neighborhood botanical garden (hers) and while she's lucky with plants and seems to have a golden thumb, she works very hard so the garden will thrive. My friend admired this plant, and later, I was able to ask the neighbor about it. The branches grow like some kind of scientific diagram or crystalline entity, and very angular, with tiny purple flowers. I told the neighbor I wanted to paint it. She let me clip off a few little branches. Some sources list it as "bachelor buttons" but it isn't. I think she said it is in the amaranth family. 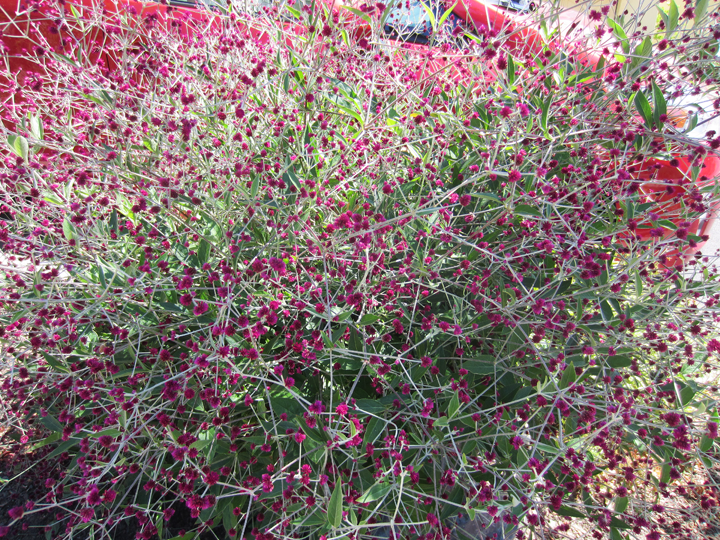 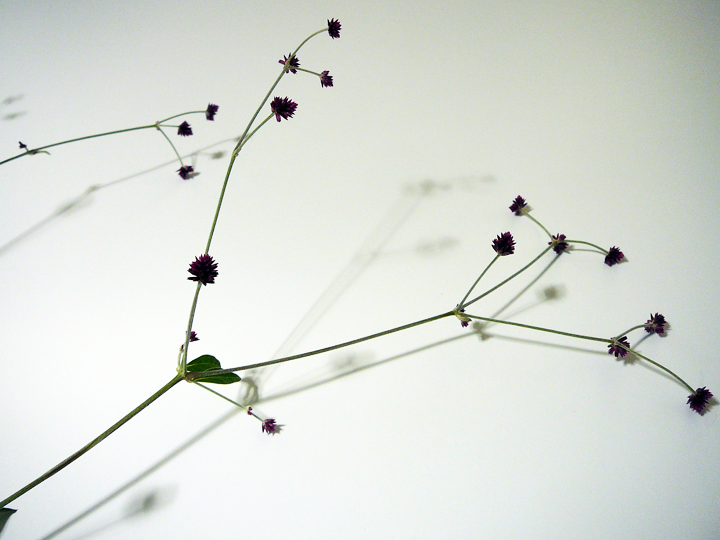 Sometimes I just want to capture nature so the piece feels true to life. No subtext. Not trying to express anything else. I dipped a twig into sap green + white acrylic ink and painted the branches. A small round brush for the leaves. A small roundish/moppy brush (that I think was originally from a child's watercolor set) was dipped in purple for the flowers, occasionally using another brush with just water first and letting the purple spread. Painted a full sheet of Velin Arches this time, with the intention of making several objects.

Portfolio with ribbon tie. Since I painted the plant life-sized I wanted to be able to see most of it. The scale of this portfolio seemed about right. (Instructions on page 224-225 in Making Handmade Books.) 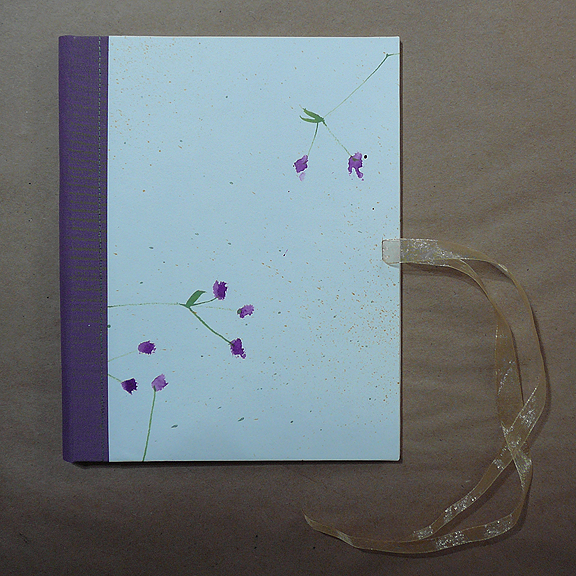 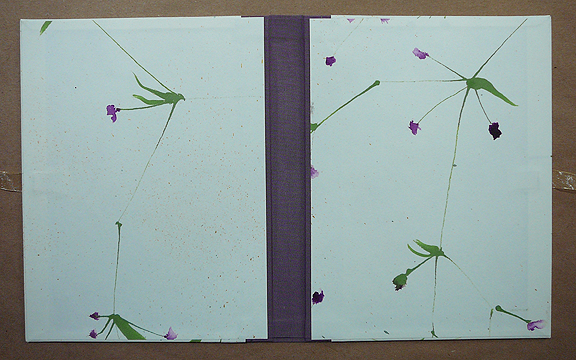 Small Coptic herbarium. I added the glassine pages so I could include the actual pressed flowers as well. 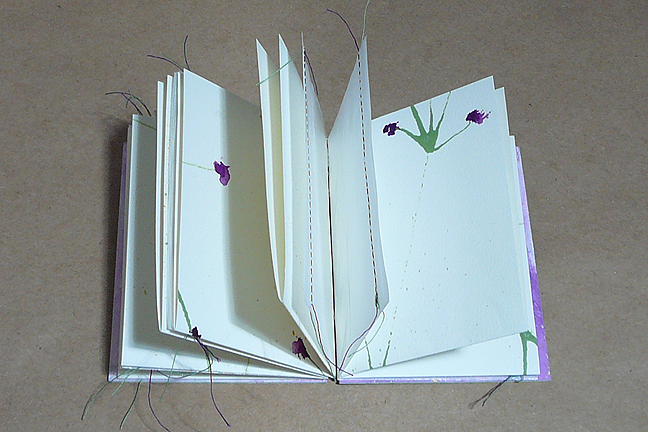 (glassine page with pressed gomphrena on the left) 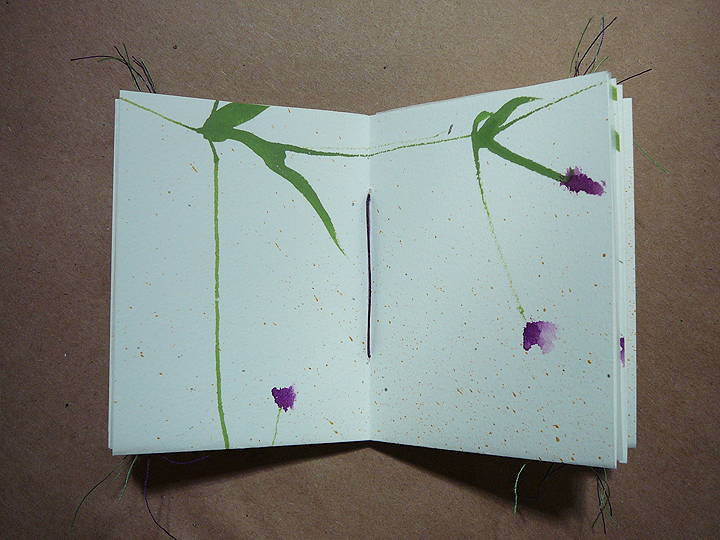 Tiny Coptic. I decided that the scale of this book was so tiny that it would need a smaller pattern, so I added more plants before I cut the paper into smaller pages. 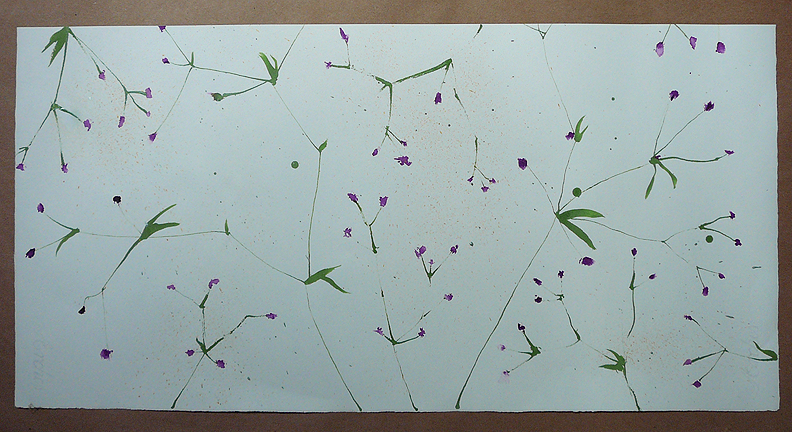 This structure and size are nearly the same as the one in this post, but with one subtle difference. Instead of taking the needle between the previous signature, I counted two gaps up before I took the needle through and made the link. I also measured out longer pieces of thread before sewing. 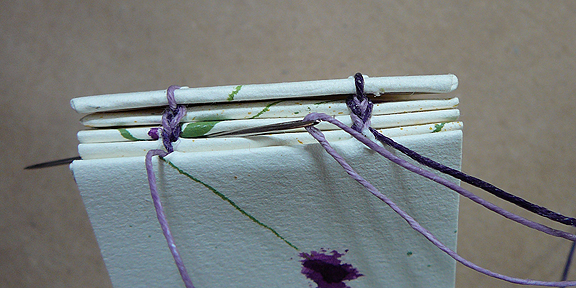 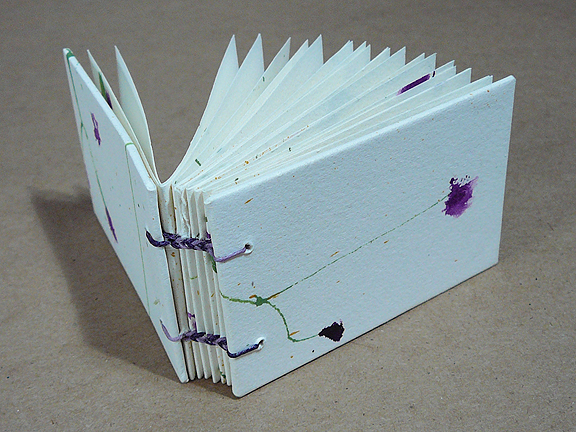 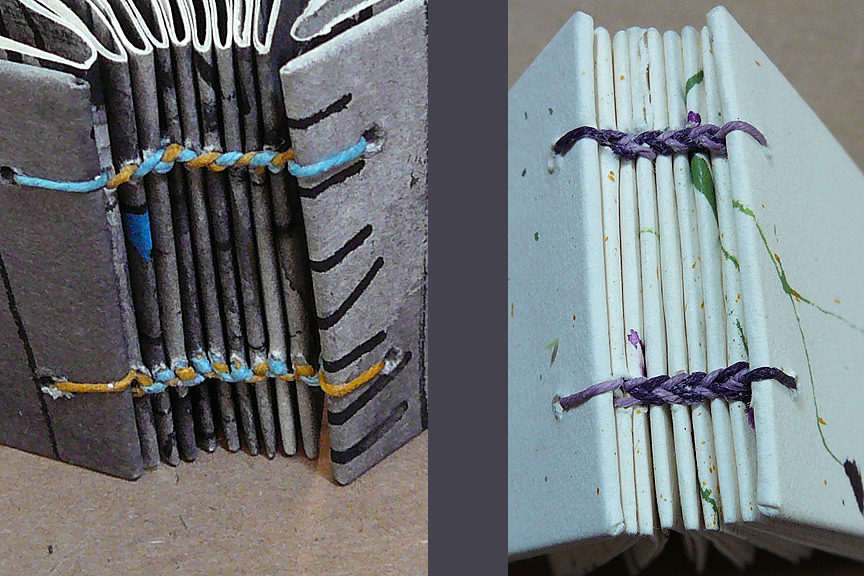 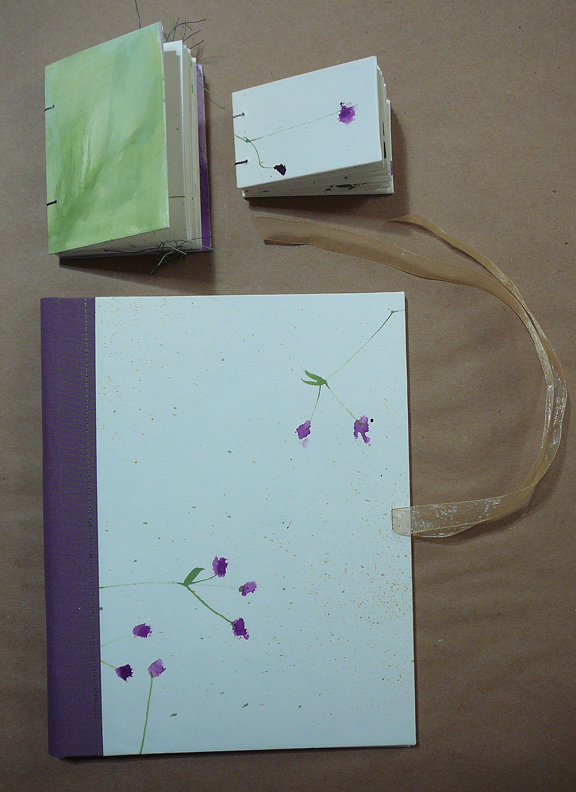 Now it's time to write a couple poems and add a title or ornament to the green cover.


Addendum, 8/3/14: full name of plant is Gomphrena Decumbens, also known as "Airy Bachelor Buttons" and because it is unavailable, I can only put it on my wish list at Annie's Annuals. Berkeley Horticultural Nursery gets it in April or May (from Annie's, I believe) but I was told that the 10-15 plants they receive sell out almost instantly.
art bookmaking creative process painted paper seeing

Cally said…
What is it that draws me to something? I love following your blog and seeing the beautiful things you make. But this, oh this! This paper, these books - they drew joy from deep inside of me - I feel slightly foolish sitting here alone in the house, just smiling and smiling and feeling 'aaaaahhhhhhhhh'.
July 6, 2014 at 3:44 PM

Anonymous said…
I have made many book covers but never tried this way. I have used lace, material and scraps of material.

Velma Bolyard said…
that's a good bit of painting! and you really captured the personality of the plant. which coptic sewing do you prefer?
July 9, 2014 at 5:53 PM

Alisa said…
Each Coptic has its own charm and use. The curved needle version, not shown here, can be used with either an odd or even number of holes and is faster to sew (once you get comfortable with the curved needle). The twist or link is pretty, uses less thread, but isn't as sturdy as others, so I don't recommend it for large or heavy books. The one that looks more like a chain takes more thread, but is sturdier, and quite attractive, I think. As usual, it depends on what you are after, what the book wants.
July 9, 2014 at 10:08 PM

Velma Bolyard said…
yeah, i like the chain most times. those curved needled eat my poor, unsuspecting fingers... my new little edition of 10 will be chain on ecoprinted with boards (poplar wood), which is why i asked your opinion!
July 14, 2014 at 7:39 AM