October 19, 2015
When I was about eight, someone gave me a pre-packaged bag of quilting squares. I did not know how to sew. I had never pieced anything before (and didn't know that sewing the squares together is called piecing, not quilting). So I sewed them together by hand in a ninepatch (didn't know that, either), and made a pillow.

At thirteen, I embarked on a quilt which was to cover my bed for a decade or more. My mom took me to the fabric store and helped me choose and coordinate the colorful patterns. When my daughter was ten and into the lime greens and blues I had loved in the 1970s, I pulled the quilt out of a bag and put it on her bed. A year or two ago, I took out the tufted yarn bows (I left one for the memory), re-quilted it, this time with embroidery thread, and patched the threadbare areas and places the seams were pulling apart. Turns out I really liked it better with the patches. Neither my daughter nor I ever liked the bows of yarn. 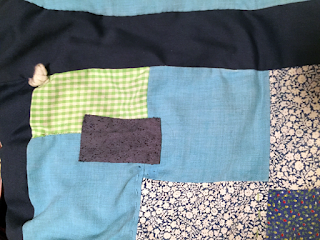 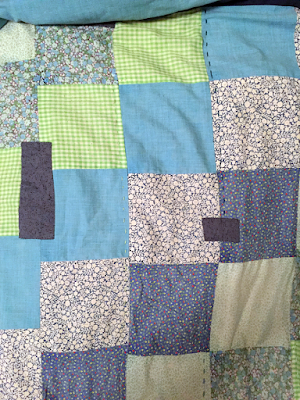 Happy with the patching process and the way it looked, I patched the quilt on my bed last year as well. Probably made it originally in the early 2000s. By this point I had seen the Gee's Bend quilts in an article in the New York Times (2002), but couldn't seem to shake the traditional and symmetrical style. 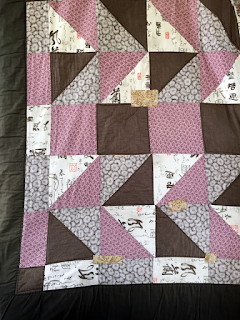 I made a crib-sized quilt for my son by taking him in his wheelchair to the fabric store and bringing him bolts of cloth to examine. If he smiled, we got it. He liked the chickens. 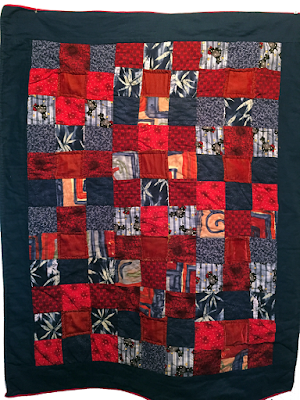 Made this small one in 2008, five years after he died. A kind of healing. It begins: I let go / of my take-apart self / cold, I confront / a tumbled scene: and includes the line: growing rings / over a scar 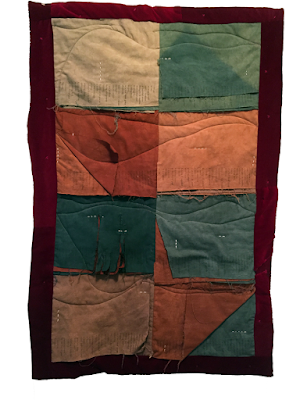 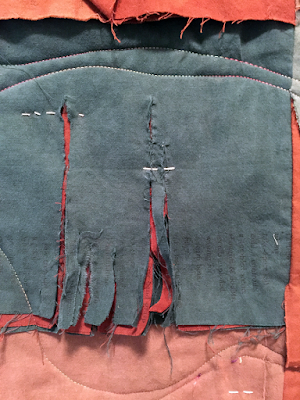 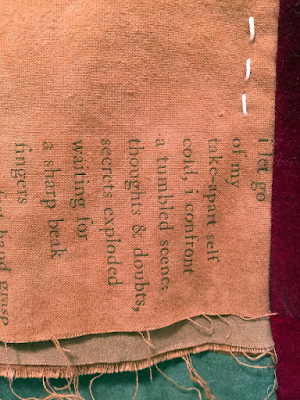 Started this small one out of found cloth and stenciled imagery a few years ago and finished it a couple years after that. I use it to cover my letterpress rollers. Very much happier with the free-form look. 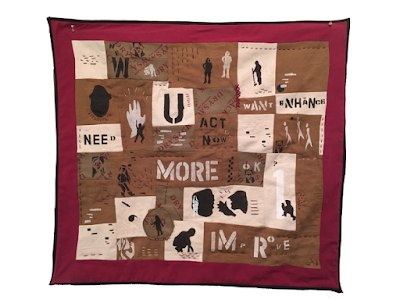 This small one last year for my mother-in-law. Used cloth leftover from my son's quilt as well as fabric from a quilt my daughter had made. 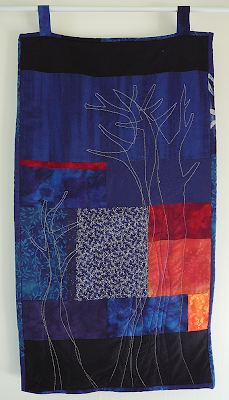 And now, after letterpress printing on cloth, I've made a new, larger one. It's about half a twin size. An art quilt I call, "Strength." My thoughts were of community and the union I'm working with, and how we help each other by first getting to know each other. I woke up one morning with a vision of the woman in profile, actually a variety of women's profiles in one image. She's new. The other linocuts were taken from blocks I've carved before: hands, the egg shaped frame, the ampersand. I've been also thinking about the phrase, "Yes, and…" 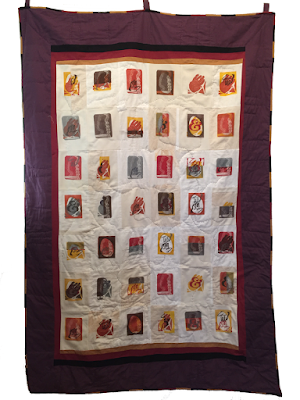 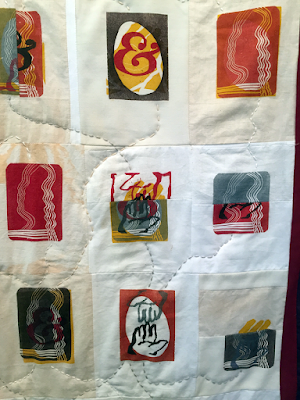 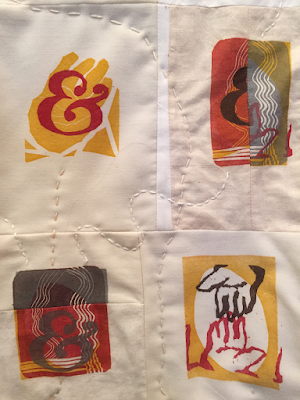 I have another batch of patches printed for a second quilt, and an idea for a third. This should keep my hands busy for the next couple of months.

Lucia Sasaki said…
Beautiful quilts, thanks for sharing their stories.

I was very amazed when I read Expressive handmade books: I never would imagine that you would share about your son in an apparent "technical" book. Sorry for your loss, although it enriched a lot my reading.
Thank you so much.

Nesbit Library rocks! said…
Do you use special ink when you print on fabric or just the usual oil based ink? I make fabric artist books and my husband is a letterpress printer but we haven't combined the two yet. Thanks for your blog.
October 20, 2015 at 9:06 AM

Alisa said…
Thanks, Lucia. I find if I try to conceal or ignore something painful, I will be blocked in a creative area somewhere else.
October 20, 2015 at 9:06 AM

Alisa said…
I use the standard VanSon oil-based inks, having realized that they never come out of my clothes anyway…From experience with my bookwork, silver and gold are not lightfast. But I do know that Drive By Press has a specially formulated ink, "Drive By Black," to get a rich black on their t-shirts and other textiles. Their website says "quick drying time and color fastness." I've been meaning to try it. It's $27 a can.
October 20, 2015 at 10:08 AM

Daria said…
Alisa, What a beautiful and touching history of your life. Thank you for everything you share with us.
October 20, 2015 at 3:14 PM

Judith said…
Alisa, thanks for this. Twenty years ago my son and I made a pretty lame quilt together. I see now, from this post as well as from Signs & Symbols (a book about African American quilts -- look for it!, that all that quilt needs is colorful patches, embroidery, and paint.
November 2, 2015 at 5:42 AM

Alisa said…
Judith,
Thanks for the tip about the book. I can tell from the title already that I will like it. And good luck with the old quilt or news ones in the future!
November 3, 2015 at 3:32 PM

Liz A said…
words fail me, but I wanted to let you know I was here and was deeply saddened by learning of the loss of your son, even as I smiled at "he liked the chickens"
September 3, 2021 at 5:59 AM