Stories that Fly and the SF Bay Osprey Cam

June 08, 2017
As if I need one more thing to attach me to my screen, I've been watching the SF Bay Osprey cam on and off for the past few weeks. It's nice company while I am making things. A friend alerted me to this nest on the bay where eggs were going to be hatched. Although I missed the egg-to-chick transition, I've been attentively watching the chicks' growth since then. These are screenshots from the cam. 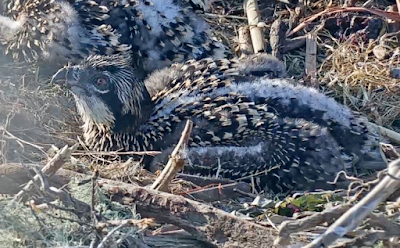 There is always much feeding. 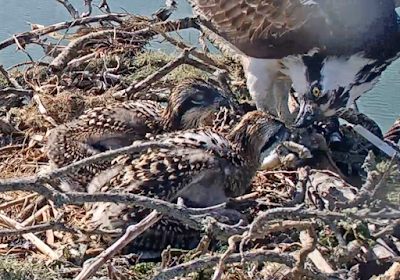 The family scene, several hours later. Richmond is in the front. He is
a little smaller than Rosie and his chest is all white. She has a little spotted necklace. 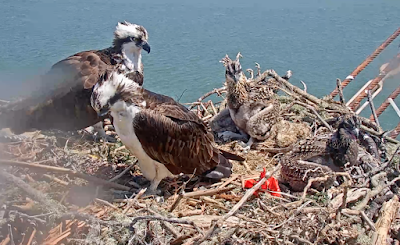 More interesting is the daily story. There are some dedicated folks who comment in the live chat section so that when you step away from the cam you can find out what happened in the soap opera that is birds. How many fish and what kind did Richmond bring in to Rosie and the chicks, Whirley and Rivet. Are the chicks fighting? What sort of home improvements has Rosie made today? You, too, can view eating, pooping, mating, and sleeping.

Then, there is the inexplicable collecting habit of Richie. I was poised to take a picture of Richie bringing in the next fish (often a striped bass), but I caught this instead. 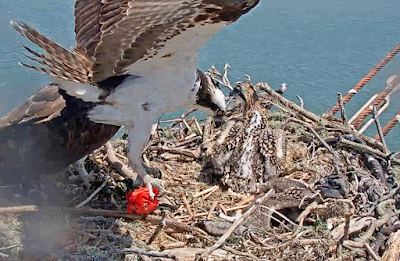 The chat folk were calling it "red duct tape." He has apparently brought in a variety of red objects. Eventually, Rosie sends them over the edge. Nope. Not having it.

Once, Rosie was cheeping, hungry. Richie flew in with something, I think just a portion of the tail of a fish  (the camera is infrared at sundown, so nighttime viewing is in black and white). He stood on the tail. She sidled up closer, eyeing it. "What? This is all you brought me? You certainly took quite a bit for yourself, didn't you?" He stood down. She gobbled it up. Those beaks can really tear up a fish.


Cut grass, weeds, twigs, and lichen-covered sticks are looking less like random things on the sidewalk and more like nesting material every day. I've started watching for red objects, too. They can keep the fish, though. 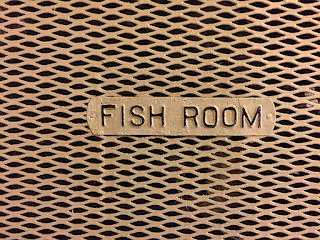 The birds' names reflect their location; they are on top of an abandoned whirley crane in Richmond, California, next to the SS Red Oak Victory Ship. We visited the ship, in the wind by the water, from fog to sun, wandering about for close to two hours. 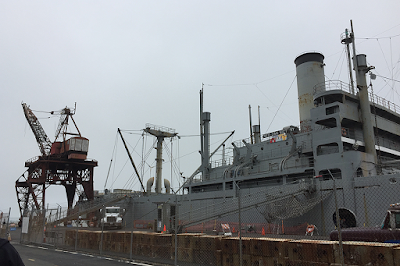 You can see the edges of the nest and barely see Richmond on the rail (on the left, the dot under the camera). 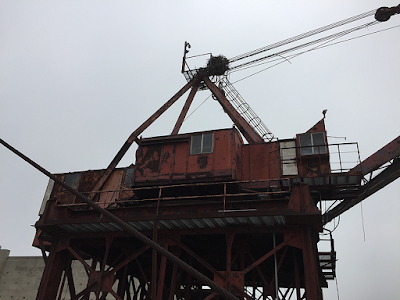 The nest and ship overlook Brooks Island, acquired as a park in 1968, and reached only by special reservation. It was home for thousands of years to Ohlone Indians. 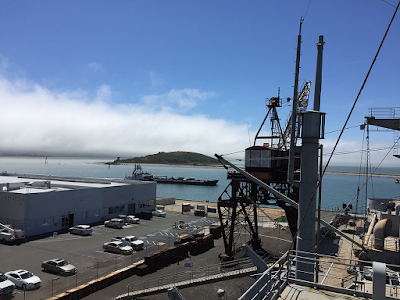 It was nice to confirm that yes, they do exist in real life. Slowing down, taking time in one place, watching for an extended period of time: these will bring in the stories like fish to the chicks, right out of the air.