October 04, 2017
In her book, Centering in Pottery, Poetry, and the Person, M.C. Richards writes "The experience of centering was one I  particularly sought because I thought of myself as dispersed, interested in too many things" (20-21). She writes how she wished to just focus on one thing like other people she knew. After becoming disillusioned with academia, she turned to pottery, but she never stopped writing. She learned to finally accept herself, that it was okay if she did more than one thing.

Centering is an interesting concept. Imagine the clay on the wheel as ourselves, spinning. We reach out toward the new, then bring it back in toward the familiar. Gather, then evaluate. Learn, then synthesize. Each willingness to reach out and learn brings new potential for the art and writing practices we already have. The new knowledge doesn't overwrite or erase; it enhances, enriches, deepens, and shapes. We grow.

Martin Wong's work at Berkeley Art Museum,  with a catalogue of the same name: Martin Wong: Human Instamatic is an exhibition that keeps centering itself. It reaches out to American finger spelling and graphics, urban textures and human isolation, his experience and interests as a gay man, as someone of Chinese heritage, and as an artist immersed in the world around him. Then it brings it all back together, synthesized. Not all of these interests are present in every work, but you can see both the outward looking and inward looking spirit in every piece. He began as someone who liked to draw, who drew people as "The Human Instamatic," and he studied ceramics in college. He designed sets and installations. But as the video of his life shows, he once wrote to Santa asking for an oil paint set "with no lines or numbers," so it is clear he always wanted to paint as well. The paintings in the exhibition are in both oils and acrylics. There is no hierarchy of oil over acrylic for him. Each medium fulfills its function.

The wall text history says that in 1978, he began his new life in New York City as a night porter and felt isolated as if he were deaf and mute. This overwhelming feeling led him to incorporate finger spelling into his work. The merging of words as signs of the hand in a visual work is something I hadn't seen before. It's quite distinctive. 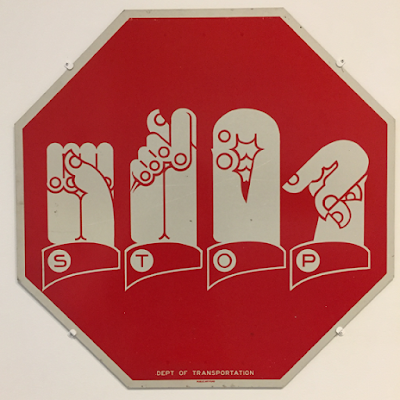 This work includes lettering and textures with urban surfaces: brick, wood, metal, and people. He created many paintings with brick-like surfaces.

Exile--This Night Without Seeing Her Passes Like an Eternity, 1987-88
acrylic on canvas

Text, lettering, books, and the writing in the sky: constellations. 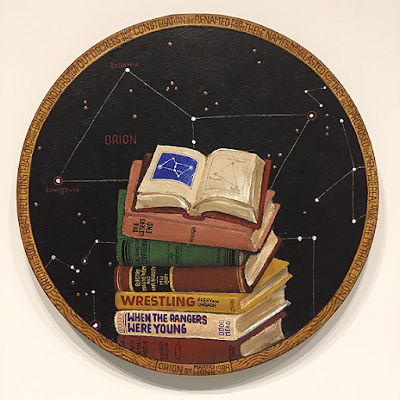 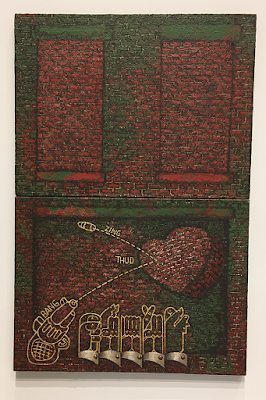 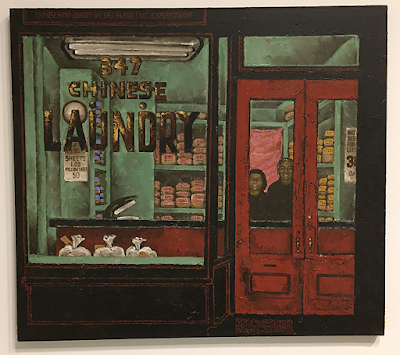 Chinese Laundry--Portrait of the Artist's Parents, 1984
acrylic on canvas 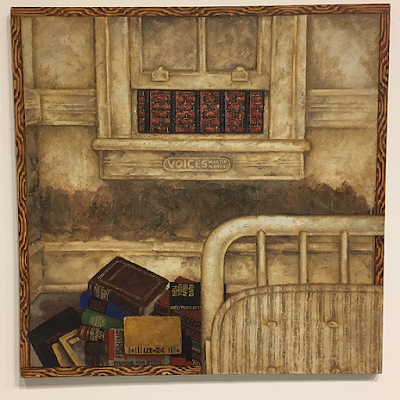 Wong was not imprisoned, himself, but he had friends who had been.
He was interested in the experience, and was able to create emotionally moving paintings from the stories he gathered. 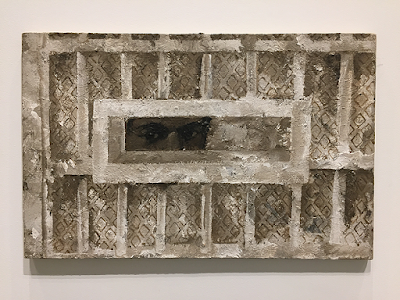 an early work, with finger spelling as the sole imagery 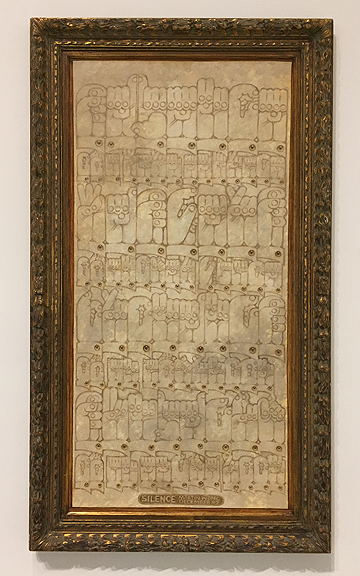 it reads:
Silence
of a lost embrace
W(h)lispers
of another place
Dronings
of an afternoon
Sunlight
of an empty room

One of the earliest in the exhibition: lettering as texture 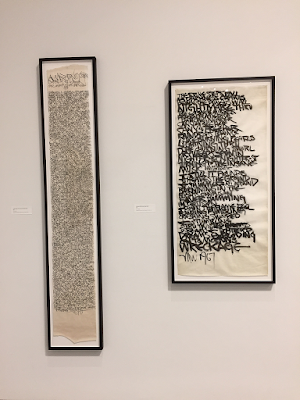 Left: Meeting of the Bored of Education, 1971
ink on vellum 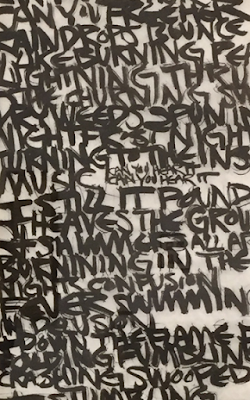 R above and detail: Untitled (The Stone Steps Fall), 1967
ink on vellum

M.C. Richards also writes, "One does not decide between craft and art, pottery and sculpture, tradition and the individual talent. One is in a perpetual dialogue and performs the act one performs" (23). "Perpetual dialogue" is the perfect phrase for creative practice. Our curiosity keeps us constantly in motion, looking, sensing, trying on new approaches. We adjust to fit, alter to make useful to us.

Martin Wong's "perpetual dialogue" shines through in this exhibition as a wonderful example. Through the works you experience the repeated journeys of reaching out, gathering, and returning to weave the new threads back into the artist's nest, incorporating them, and making them his own.

The exhibition is on view at Berkeley Art Museum until December 10, 2017.