"but in things" :: our (un)intentional collections

December 18, 2017
The series Mr. Robot quietly revolves around a poem that begins, "so much depends / upon // a red wheel / barrow." That's half of the poem right there. It's by William Carlos Williams (1883-1963), a medical doctor turned poet, born of English and Caribbean descent. The poem has no title, but most people refer to it as "The Red Wheelbarrow," (46) which also turns out to be the name of an eatery in the alternative, apocalyptic New York City of Mr. Robot.

I got curious. I had not read much William Carlos Williams before, so I checked out William Carlos Williams: Selected Poems (American Poets Project) edited by Robert Pinsky. The book features many spare poems with crystaline imagery and some longer ones that were fine but not as exciting to me. I also kept tripping delightedly over familiar lines. In the poem "A Sort of Song," which appears to be about the writing process, we find "(No ideas / but in things)" (103). A neat reading of it by Williams in 1954 is here.

Thinking about things and the ideas and stories in them: take a look around your room. Rummage through a drawer. You've got a collection in there—at least one, probably more—to which you actively add. Art. Socks. Books. Tea. Pens. Watches. For these active collections you may take pleasure in looking through and handling each object. For these active collections, you are probably also interested in the hunt. We may not realize it, but we are constantly collecting. Our own—shall I say "curated?"—collections can be expressive. They continuously express our ideas about the world: what we view as important, interesting, or funny. Active collections are an extension of ourselves that we may share with others. We may take joy in arranging them or in telling their origin stories.

Sometimes we collect things, not because we take pleasure in them, but because they might be useful: carrot peelings for the compost, tin cans for recycling, rubber bands for whatever we might need a rubber band for. The story to come. By actively collecting potentially useful items we are attempting to predict or affect the future.

The inspiring and thoughtful documentary film, California Typewriter, embodies the idea of collecting and our connection with both the past and the future. While it tells the story of one typewriter shop here in Berkeley, it also touches on other people affected by typewriters: an obsessed collector, a passionate collector (Tom Hanks), an artist who makes sculptures scavenged from typewriters beyond repair, a poet who will create and type a poem for you in public, a playwright (Sam Shepard) a writer (David McCullough), and a songwriter (John Mayer) who only compose their works on the typewriter and the Boston Typewriter Orchestra, who compose and play typewriters as instruments. Interwoven are concepts of creative process, recycling, repair, and just slowing down. In the case of this film, so much depends upon, not a wheelbarrow, but a typewriter. (There's a red one, too.) All of the people in the film are active collectors of something: either the typewriters themselves or the words they create.

More ideas in things: what about passive collections? I don't mean the dust collecting under the windowsill or the shirts in the laundry basket. Both of those are ignored and waiting for action. I'm thinking about leftover objects that we don't immediately throw away. Some attractive, some less so. Unintentional collections, perhaps. 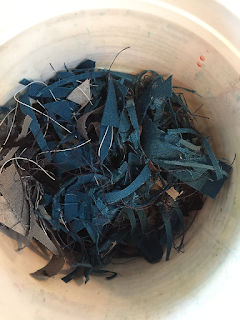 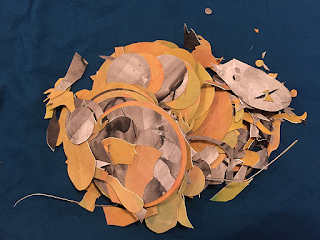 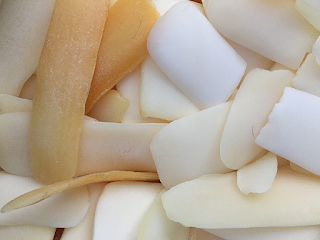 What are these bits about? Are they worth anything? (I don't even like buttons.)

I finally used a years-long, unintentional-but-compulsive collection of tickets and stamps torn off of envelopes to make collages for my book, What We Reuse in 2016. But I hadn't planned on making anything with the ephemera as I constantly clothespinned and bagged the items in bundles. (You can see one of these baggies in a 2011 post, "An Artist's Book Is Not a Taco," here.) Perhaps sorting and bundling is what we do (or at least what some of us do).

In 1997, Julie Chen used some of the trimmings from her books to create one book with envelopes, Leavings, to hold them. Leavings is a beautiful book that explores memory, baggage, and attachment. I asked her in an email about those leftovers, and she said that they were things she had just not gotten around to throwing out. They were corner roundings from (1993) Correspondence Course and tunnel book holes from (1996) Life Time, among other things. Regarding these unintentional collections she said that it's hard for her to throw anything away until "it becomes clear that I'm never going to use them for anything else." I imagine this means that at some point they lose their liveliness, connection, or spark. She also included bits of ribbon and shed snakeskin. She wrote:


Funny story about the snake sheds—I was cleaning out a drawer last year and found a plastic container that had some leftover snake sheds and some kind of insect had eaten every last bit. It was really weird. I love materials in general, so there's always plenty of stuff lying around.

She called it "more like accumulating," but I see an active collecting impulse to actively store it. It may not have meaning right now, but it may spark something new in the future. Unintentional, true, but it's a collection of potential sparks, whether or not the actual things are used. The shed snakeskin has gone, but it still leaves behind its story: the idea in the thing.
art artist book art collection creative process discussion poetry random seeing stories

Debbie said…
Interesting post, we all do collect consciously or not, it seems to be a response maybe from when we were hunter/gatherers and needed to store food, who knows.
I haven't come across the film, sounds good.
December 20, 2017 at 4:33 AM

Alisa said…
Debbie, Thanks for writing!
Interesting that you mention hunter/gatherers. There was an interesting story on the op-ed page of the NY Times 12/20/17 about a community of hunter/gatherers in the Philippines that values storytelling. https://www.nytimes.com/2017/12/20/opinion/holiday-stories.html