January 30, 2018
We crossed a couple bridges last Friday to catch the third-to-last day of the Rodin and Klimt exhibition at the Legion of Honor in San Francisco. It was a sudden decision, based in part on my husband's newfound interest in Wiener Werkstätte: the Vienna Workshop that bridged art nouveau and art deco. A group of artists "seceded" from the established Vienna art scene to create a new art, one that encompassed all aspects of daily life and design, from architecture to wallpaper to fashion to books, including applied arts. Art and craft went together and were equally important. Gustav Klimt played a vital role in this group. The book Wiener Werkstatte: Design in Vienna 1903-1932 by Christian Brandstätter is an excellent history and background to the group with enough photographs to enlighten. Typography, patterning, and design of all sorts were all revised and remade. Look for the photo of Klimt in his long blue smock with white designs on the shoulders.

Klimt designed the 1898 poster for the first exhibition of the Secessionists. We have the goddess Athena; we have Theseus fighting the Minotaur. According to the wall text, this was the "uncensored" version. Klimt had to go back and add a slender seedling to cover Theseus's genitalia. What is still striking about the poster is that all the information and activity takes place at the edges, and the center of the poster is an open square. The viewer fills it with his or her own imagination or accepts it as a calm place to meditate (and note the artist's name in the corner of it). The colors are simply light tan, red, pale green, black, and white, mostly used as color fields, very spare. The lettering is a wonderful mix of letters that might have been carved in ancient times and what might now look to us as a 1920s or 1930s style of lettering. 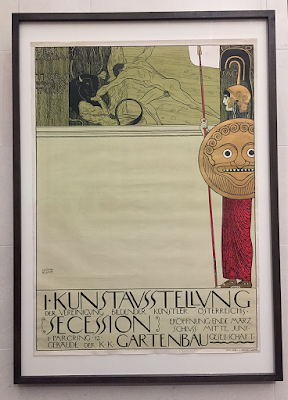 The following painting created a bit of a scandal, it seems.  A nude gazing at the viewer. Not an allegory. Klimt painted her hair strategically over her breasts. A visitor strategically placed herself elsewhere. 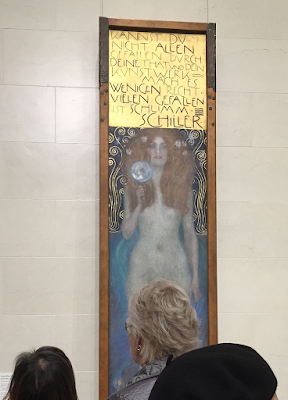 I had seen a few Klimt paintings at LACMA in 2006, but they didn't resonate with me at the time as paintings, only as an important historical moment: they had been stolen by Nazis and returned to a family living in Los Angeles by the Austrian government.

Now that I know that the designs were supposed to infuse and elevate everyday life, I think I understand and like Klimt's paintings better. I'm a fan of curlicues, usually in the form of labyrinths, but spirals are nice, too. We're used to seeing his paintings with gold, but not all of them feature that form of sparkle. This next portrait includes a woman wearing a garment made from fabric that another artist designed. Page 341 lists it: "Portrait of Johanna Staude (in Wiener Werkstätte dress made from 'Blätter' [leaves] fabric by Martha Albert), 1917-18 (not completed). Oil on canvas." And a woman visitor, whose outfit is also to be noted. 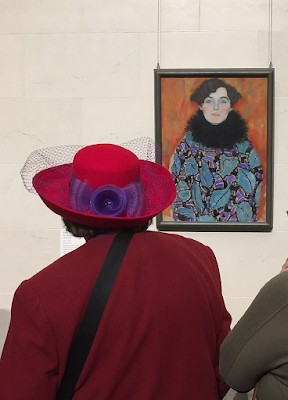 The painting below is unfinished also, I believe. Here is a woman in a penciled-in patterned dress, her surroundings already heavily patterned and painted. Another painting in the book, on page 337, is very similar in that it has the patterned dress against a patterned background as well. 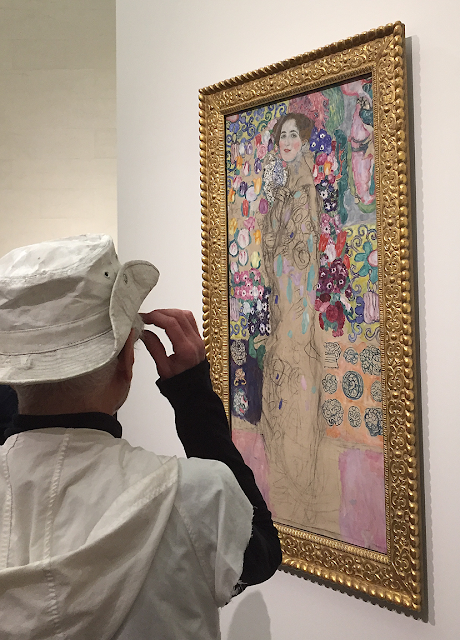 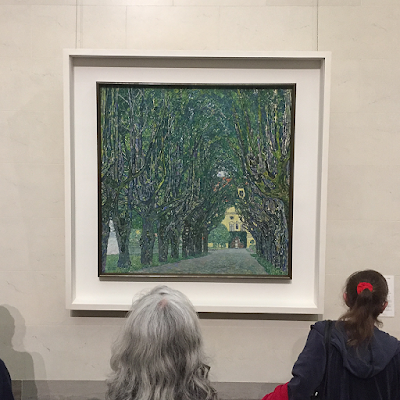 Apparently, in his later years, Klimt became very interested in landscape painting. He used to cut out a little window, a viewfinder, to find his subject. This is the first painting from that era I've ever seen painted as a square. Reminds me of all the websites and little digital photos of today.

A small sampling of Klimt's work. The wall text explained more of the politics and revolutionary aspect of it. It's interesting to have an idea about something for a long time and then have it change just through reading.