March 12, 2018
After seeing the Robert Rauschenberg exhibit at SFMOMA, my head was buzzing with ideas. One was to sew cloth together that first had been pleated. I had no idea what would happen after that. This is a little quilt that spoke to me as I went.

I began with some scraps from other quilts, inspired by Christina Kim. Last March, I had seen a wonderful textile exhibition, Scraps, at Cooper Hewitt Museum, and was particularly enchanted by how she and the other two designers used what would otherwise be waste material from the garment industry. A book that gives you nearly the same feeling as seeing the show is the exhibition catalogue, Scraps: Fashion, Textiles, and Creative Reuse: Three Stories of Sustainable Design. Kim in particular created one line of clothing, used the scraps from that to make the next, and down the line until all that was left were little amulets. At each stage she sourced the production to local people. I have a little bag with scraps that I have printed, so I began with those.

As I ironed and pressed the scraps I heard the words in my head, "folded many times thick." I knew it was part of something Thoreau wrote because my friend quotes it, usually when I am talking about layering, but I couldn't remember the rest. It turned out even better when I found the whole thing. At Gutenberg.org the full text is in a letter from Henry David Thoreau to Ralph Waldo Emerson, July 18, 1843:


In writing, conversation should be folded many times thick. It is the height of art that, on first perusal, plain common sense should appear; on the second, severe truth; and on a third, beauty; and, having these warrants for its depth and reality, we may then enjoy the beauty for evermore. 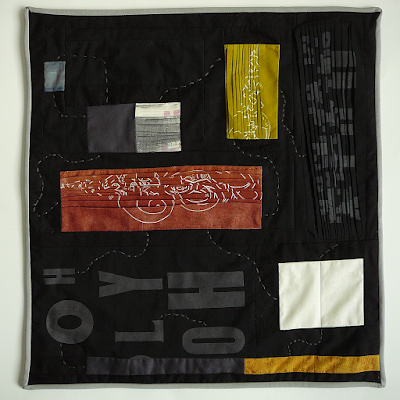 Pieces are from these quilts: Seraph; Where Is My Passport?; What Are We Becoming; Hope Rants; Nightlights by the Bay. The white rectangle has a crease ironed down the center like a book. Actually, all of the pieces reference the book form, either by the accordions, the printing, or the page spreads (Thanks, Velma, for planting that idea). 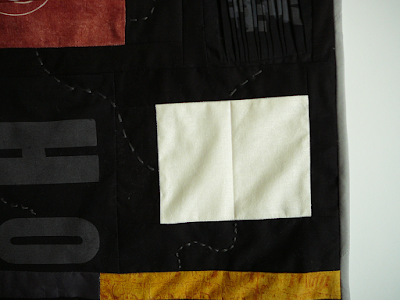 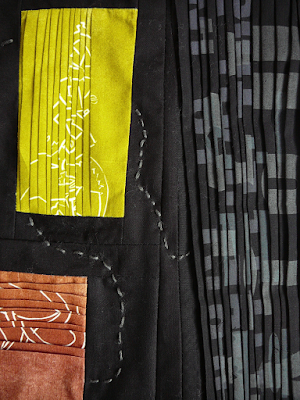 The quilted stitching draws connections from one panel to another. Thinking about Rauschenberg's materials in conversation with each other, too. Common sense, truth, and beauty. Worthy goals for any artistic endeavor.