March 23, 2018
Some of the work I feel most connected to comes to me in dreams.* Usually it is an image that I need to follow. Sometimes a title. Sometimes a whole story, a structure, or a color palette. This time it was the vision of fragments of cherry prints scattered throughout white-on-white fabric. At first I thought I would have to buy white patterned cloth. Then it dawned on me that I could and should certainly print it myself. "Should" because I would feel more connected to it; it would have more meaning to me because I had paid close attention to it.

As I hunted for cherries to draw from life I discovered that they aren't yet in season and that they are a huge import from the western United States. I would have to draw from images online. The quilt would be about anticipation and being in the moment, both.

For the white patterns I chose to print a linoleum block of leaves from my "library" and some related wood type words that included a phrase from the Magic 8-Ball, "Ask again later." On my walks up the hill I noticed the prunus plum/cherry blossoms were out (mid-February), so I carved a new block for them and printed that in light pink.

My cherry drawing and subsequent print is a composite of various images I found online, and it decided it simply wanted to be two colors, just two shades of red, no more. I was on the verge of trying one more darker red, but the print said no. I printed it on paper as well, just a few copies. The prints are here as "Always Cherry Season" at nevermindtheart.

As the prints dried and I waited, I felt I wasn't expressing all the emotions of anticipation and being present; I needed to write, set, and print a poem as well. The first poem I wrote felt too light. Something was missing. I remembered Kenny, my co-worker when I worked in my twenties at Pegasus Books. Perhaps I had been thinking about him all along. I remembered he had given me a chapbook of his poems, and that his Filipino family had been migrant workers. That intertwining relationship of the fruit to human workers felt important to include.

The chapbook I have is from 1998, the cover designed by another co-worker, Gina Lewis (now Gina Lewis Lee). The poems are grounded, dark, poignant, some are heartbreaking, chronicling some of the things he had told me: family, a life cycle from his own childhood and young adulthood to his proposal of marriage to the birth of his daughters to his separation and divorce. He and his former wife lived around the corner from my husband and me. We had daughters the same age who met a few times, too young to remember. The poems were so good. I'm not sure I appreciated them at the time. I thought I would reach out, see if he had a poem for my magazine Star 82 Review. What was he up to? Ask Google. The first listing online was his obituary. 1954-2013.

I cried. I didn't know him that well even though we worked together for two years. He was soft-spoken, thoughtful, loved his daughters and jazz music, dressed well.

A dream took me on this journey.
This quilt is dedicated to Kenny's memory. Light and darkness. Rest in peace. 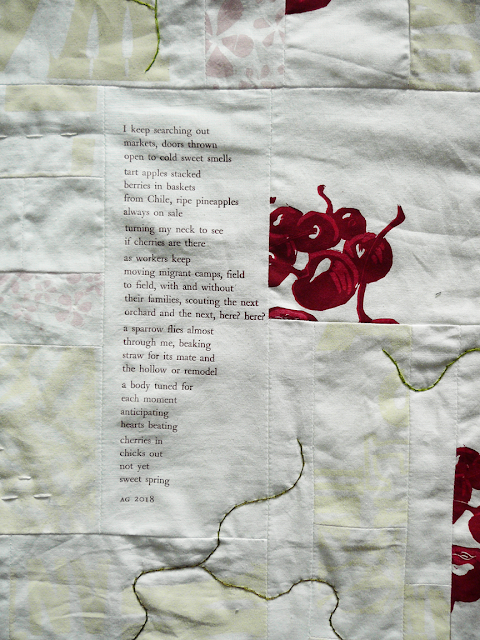 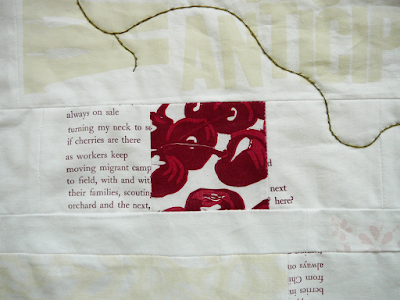 detail
While the poem fragments are at different angles,
all the cherries are rightside up. 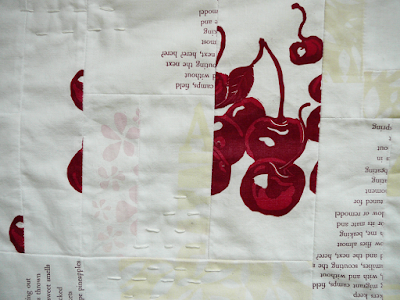 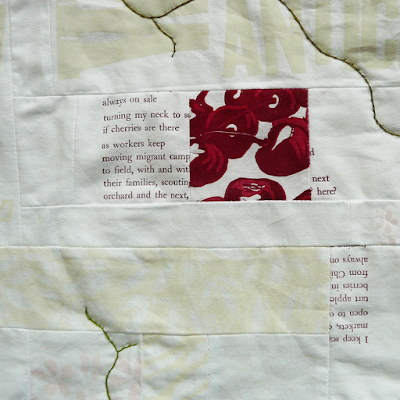 *(Links at the titles) My artist books Tree came as a vision, title and complete book structure; In the Wake of the Dream came as consecutive dreams to be altered; The Elephant's Lesson was a dream; She Is the Keeper was a dreamed story; A Witness to Curious Speed came as a title only; Buddha's Bowl came as a complete story.

Larger image of Almost Cherry Season will be posted soon at www.neverbook.com.