April 23, 2018
We recently returned from several days in New York City. If there is such a thing as flash travel, like flash fiction, that is what we do; we compress our expeditions ("expotitions" if you are Winnie-the-Pooh) into three days, packing in a variety of museums, eateries, odd shops, and so forth. One museum, that had not been on our radar previously, was the Museum of Arts and Design. Like many things in NY, it was a small museum with rich exhibitions. Surface/Depth: The Decorative after Miriam Schapiro was one of four shows that caught our attention and provoked discussion and thought. 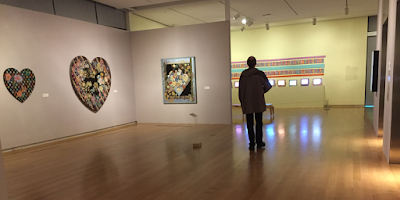 In 1975, Schapiro organized the first meeting of the Pattern and Decorative Arts Group, which became a movement. (I wrote previously about Judy Chicago in a post here.) Her work creating self-described "femmages" are the launching point for the exhibit.

I asked my friend Celeste, who had been a student of Schapiro's, if she had any impressions or memories she would like to share. She said:


"Miriam Schapiro taught courses at UCSD before and just after her collaboration with [Judy] Chicago on Womanhouse. What I remember most vividly was that she revitalized my childhood love of cut'n'paste with a method she called Femmage. She got our class engaged in feminist issues and using stereotypical 'feminine' materials like sensuous, gypsy-patterned fabrics, crochet and lace bits and girly 'things': objects that women are associated with, even now, like lipsticks and their embroidered cases, mirrored cosmetic cases, and even women's undergarments as potential bricolage materials to combine and paint over.  As a young woman from New England who only knew about the existence of two or three women artists at that point (Cassatt, O'Keeffe, and Rosa Bonheur) this was radical and heady stuff. I owe her and her student, Suzanne Lacy, whose work Mimi evoked in lecture, a lot."

I wish the exhibit had had Celeste's statement, statements from her other students, or at least quotes from Schapiro, perhaps from her books Women and the Creative Process (1974) or Rondo: An Artist's Book (1988) on the walls, but the exhibition was fairly spare with wall text. 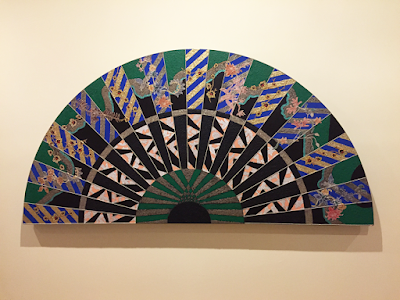 Schapiro used traditionally and/or historically feminine shapes for her works: the fan, the heart, the house standing in for the hearth. What is so interesting to me is how all the disparate objects come together so seamlessly. It's not just cut'n'paste, but it creates a seamless whole new artwork. 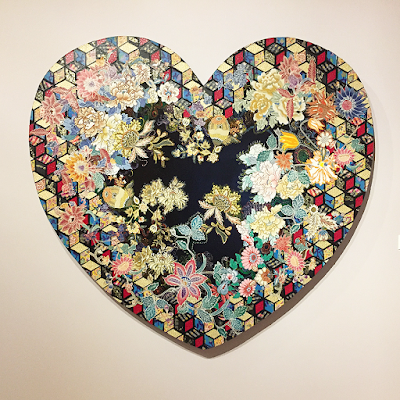 You can see the traditional tumbling block quilt pattern used as pattern in this one. 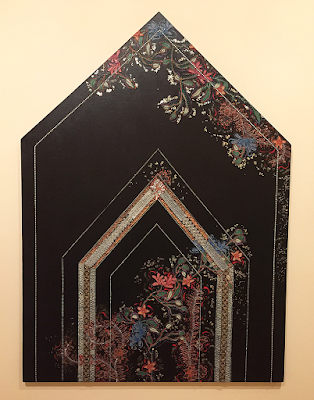 House of Summer's Night, c. 1980
This house is appealing for its shape, but also for its elegant, minimalist treatment. 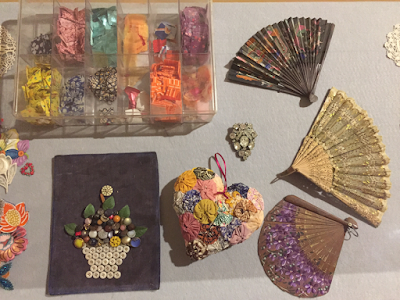 Ephemera from her studio

Apparently, she would have an annual sale of objects she wasn't using in her work.
That sale would have been fun to explore. 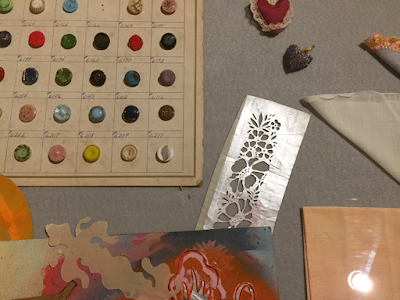 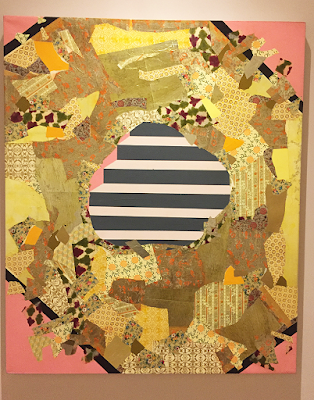 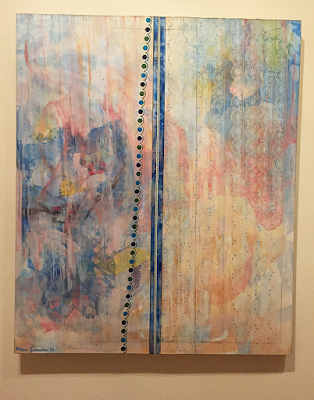 Curtains, 1972
acrylic and collage on canvas 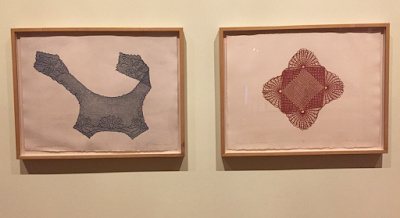 These two, above, and the following two are from the series "Anonymous Was a Woman," 1976
Collotype on paper

These were created most likely by the actual lace or crocheted piece laid on top of a photosensitive plate and exposed, then the plate was inked up, paper placed on top of it, then put through a press under pressure to print the image. One of the textile pieces was on display in the case of ephemera from Schapiro's studio. The series elevates women's work in a straightforward fashion: these are printed impressions from the actual (most likely) woman-made objects. 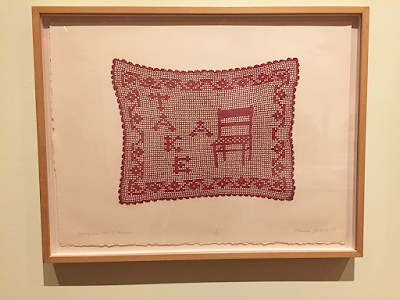 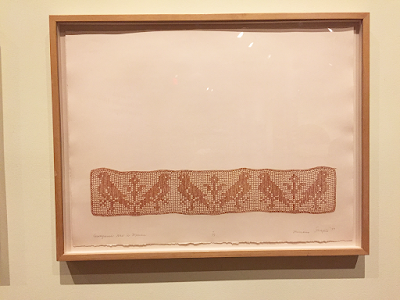 Some open copies of issue 1.4 of a feminist collective's magazine Heresies were also on display, with the article, "Waste Not Want Not: An Inquiry into What Women Saved and Assembled--FEMMAGE" by Schapiro and Melissa Meyer describing the term "femmage," on page 68. You can download a pdf here. (You can choose a topic and read all the issues here.) I also found the complete article and more in the tome that was right there on my bookshelf when I got home, Theories and Documents of Contemporary Art: A Sourcebook of Artists’ Writings edited by Kristine Stiles and Peter Selz (1996, p. 152).

Out of fourteen criteria, Meyer and Schapiro write that a work could be considered a femmage if it contains at least half (seven) of these (direct quote):


1. It is a work by a woman. 2. The activities of saving and collecting are important ingredients. 3. Scraps are essential to the process and are recycled in the work.4. The theme has a woman-life context.5. The work has elements of covert imagery.6. The theme of the work addresses itself  to an audience of intimates.7. It celebrates a private or public event.8. A diarist's point of view is reflected in the work.9. There is drawing and/or handwriting sewn in the work.10. It contains silhouetted images  which are fixed on other material.11. Recognizable images appear in narrative sequence.12. Abstract forms create a pattern.13. The work contains photographs or other printed matter.14. The work has a functional as well as aesthetic life.

Curious, and just for fun, I wondered if my pin cushion eggs fit this description and started down the list. 1. By a woman; 2. made of something saved or collected; 3. contains scraps; 4. refers to women's life (if we are applying traditional gender to sewing, yes); 6. addressed to "an audience of intimates" yes?; 14. is functional as well as aesthetic, yes. Score: 6. Seven or eight and yes, if you count hand sewing a kind of 9. drawing or handwriting and the egg as 5. covert imagery. Interesting.

While there were these numerous stellar examples of Schapiro's work, overall they seemed to be used as the context for work by contemporary artists: Sanford Biggers, Josh Blackwell, Edie Fake, Jeffrey Gibson, Judy Ledgerwood, Jodie Mack, Sara Rahbar, Ruth Root, and Jasmin Sian. While I would have liked to have seen a more in-depth analysis of Schapiro's work, it was good to see how concepts continue to be investigated, reinterpreted, and revitalized. I think it is important to show older work with younger work; there is always a new audience for it. Sometimes it helps us see one or the other works more clearly. For this reason, it would have been interesting to see Schapiro's work in its historical context as well, to trace the artistic lineage further back.

You can see a connection to Schapiro with this work by Sanford Biggers. He incorporated the tumbling block quilt pattern that Miriam did in her heart piece, above. It has embroidery stitching, sequins, and velvet, all scraps working together to create a new whole. 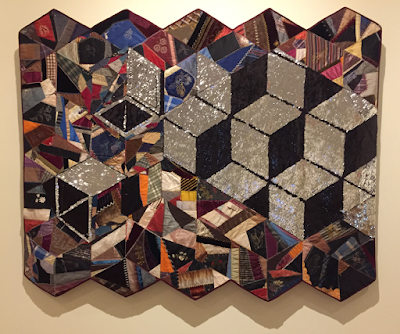 This work, in its own way, is seamless in the blending of materials to make one overall pattern referencing the tumbling blocks. 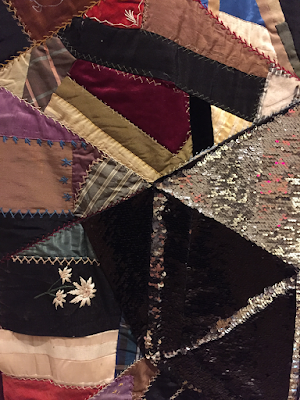 The quilt fragment he incorporated looks a bit like the one I just acquired.
I'm not sure I can bring myself to incorporate it into anything just yet. 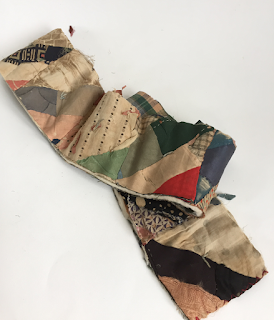 I was particularly inspired by and felt the "call to action" from the energetic wrapping and stitching in these colorful woven pieces by Josh Blackwell. The wall text says Blackwell "uses recovered plastic bags and colored fibers such as wool, yarn, silk thread, and patterned cloth to create his Neveruses" linking them with marginalized objects, craft, and marginalized people. The work ties in intent, theory, and concept to Schapiro's work. 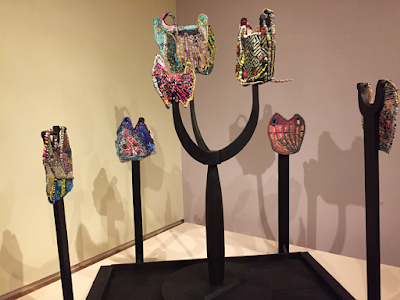 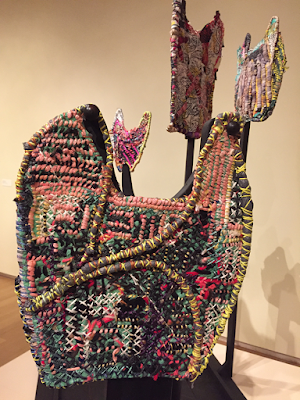 Blackwell describes them in theory as "queer" or "androgynous" as, for one example, they subvert hierarchies and use stitching as mending rather than as surface "embellishment." The works call our attention to craft and materials, things that may be overlooked or not taken seriously, and are made with the flavor that Schapiro intended in her works, elevating them, placing them in a new context and new light.

All of these works point to seamlessness, asking us to question and rethink the notion of craft and "decoration" and "patterning." From them we can explore their perceived meanings,  and the constructed hierarchies of high and low art. What work gets marginalized and why? The exhibit provides continued inspiration for exploring textiles and fibers and our place as makers in the world.

*
It's hard to stop there. Upstairs, MAD has an arts studio, where in one glass-fronted room a school group had been making things, and in another, the jewelry artist Emiko Shinozaki was in residence. She called us in, and we talked with her about her new work making jewelry on which you could play music. Emiko had been a violinist for many years, but after studying fashion fell into jewelry-making and loved it. The new work of wearable sounds bridges her worlds and adds computer programming and working with arduino to the mix. Her website is here.
art artist assemblage color craft craftsperson creative process exhibit museum music seeing

Rrosa Seconda's Studio said…
Dear Ali:
You have created a very moving commemorative essay, rich with Shapiro's own colorful locutions. I had forgotten to mention the annual sale.
I still have some treasured materials from them! Thank you for sharing your experience of the art with readers/viewers, especially those unfamiliar with this history.