August 02, 2018
Some of us are so fascinated by nests that we want to build them, weave them, or spend time in one. In the article from 2013, "Twigitecture: Building Human Nests," by Penelope Green, the writer writes about her overnight in a humanmade nest on the California coast at Treebones Resort. She writes that this camping or "glamping" has yielded "nest marriages" and "nest babies." The bulk of the article is about artists whose work has been inspired by nests.

I, too, admit to being inspired by the weavings and am delighted with natural nests, always scanning my backyard trees in the hopes that birds have built (me) one. One winter, I found a nest on the ground under the huge live oak tree that overhangs our backyard. I looked to the right of me: no birds. I looked to the left of me: no birds. It was, of course, too late in the season and the nest was rightly abandoned. It is four inches and has lichen and moss on the outside. I don't know whose this was. It has bits of shell: speckled and white. About four inches. 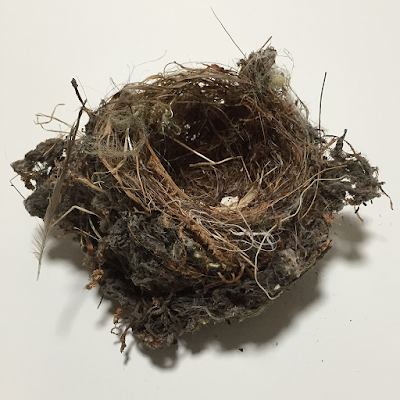 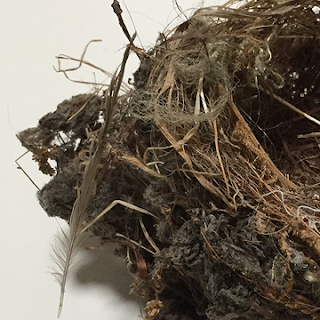 A soft gray-brown. I have a suspicion.
My guess is an oak titmouse.

Birds, nests. Texts and weavings of stories and sticks.

It just fits in this footed bowl. 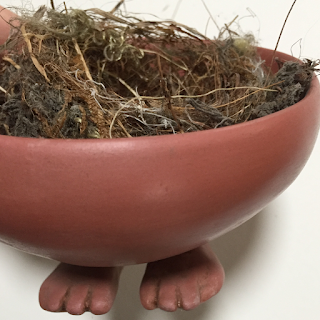 Recently, I was surprised to find a nest just out my window. My smoke bush needed a trim, the branches were growing up and out at odd angles, so I went out in the morning of July 11 with my loppers to attend to them. Lop. Lop. 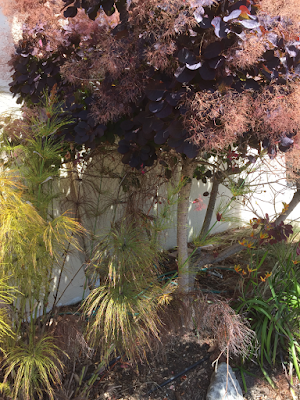 Two California Towhees watched from a wire. One alighted on the peak of our roof and looked down at me. They flew back to the Hawthorn street tree. Oh, dumb human. "Do you have a nest here?" I asked. I still didn't see it. But after trimming one more branch I saw the little basket in the crook. About six to seven inches wide. 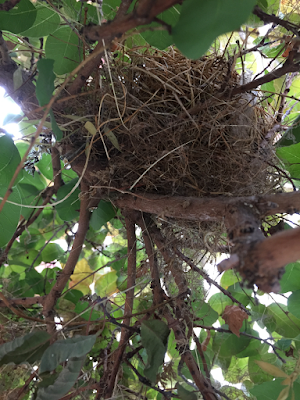 Apologies, apologies. I bowed out. They stood guard periodically on my front walkway and porch, but alas, I have not seen anyone in the nest, ever. Perhaps it is too late in the season, or they felt it wasn't safe. It appears unfinished, to me. The smoke bush will lose its leaves in winter, but although it is not typical of most birds, the towhees may reuse the nest. It's in excellent condition! Swirly weaving. Just needs a little nestorating; something soft, perhaps? 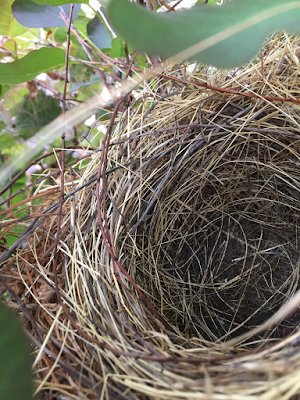 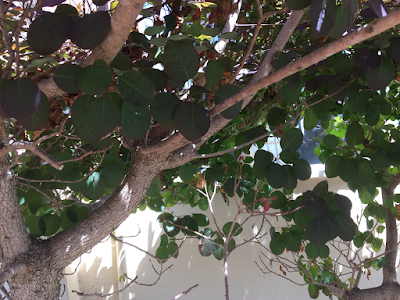 The smoke bush, Cotinus coggygria, itself is nesty and attractive.
The seeds are dispersed through the "smoke."
You can reach in and pull some out, like cotton candy. 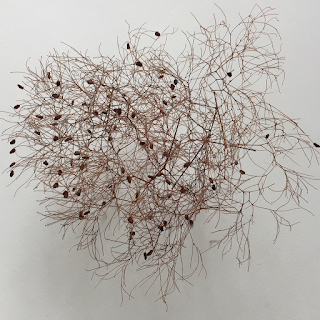 In other nest-watching, we visited the Lindsay Wildlife Experience in Walnut Creek last Sunday and saw their crow's nest made with a base of twigs. 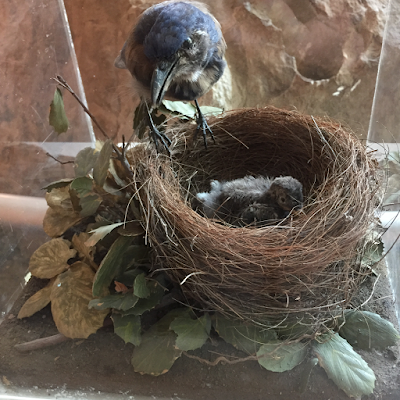 In June I spotted this rather dangerous-looking one in my neighborhood, possibly crows or hawks. 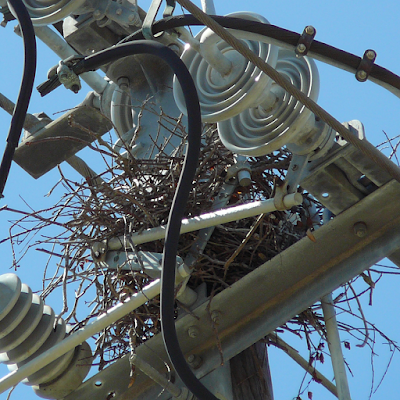 And a friend and I went out to the Osprey nest in Richmond to check in with our favorite nest on the whirley crane. 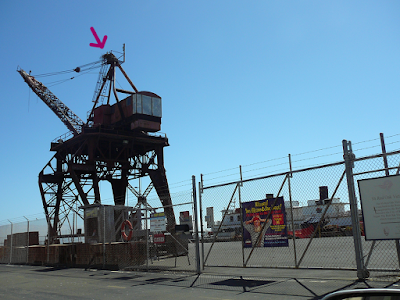 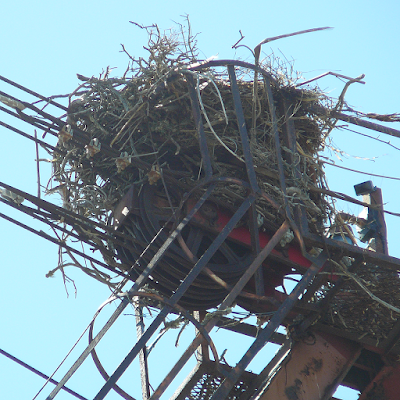 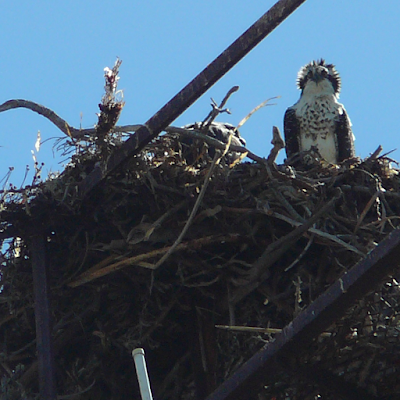 This year, Richmond and Rosie hatched three chicks who were banded and named.
VW is Roemer, Romy or Remy, the first born.
VU is Victory, also known as Vic.
VV is Brisa, the largest and possibly only female.

Someone posted a video of VV recently visiting a different nest at the Richmond Yacht Club here. The Whirley Crane chicks fledged around the first week of July. But they hang around the nest shrieking for fish at certain times of day. You can see them for a couple more weeks before they migrate: sfbayospreys.org.

My linoleum carving of Richmond on a nest of books is nearly complete for the Roadworks event at SF Center for the Book on September 23, 2018. 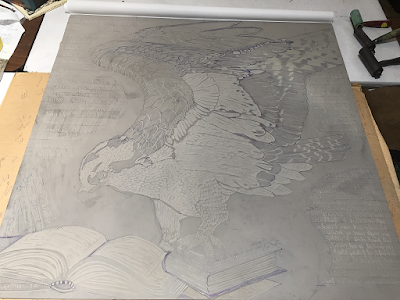 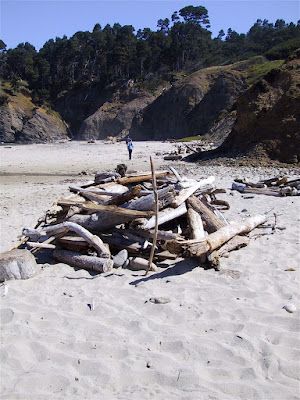 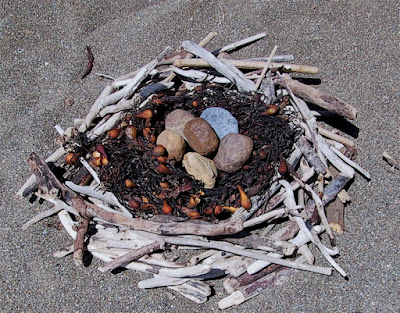 Nest of books, books of nests!

*
Addendum 8.12.18: a reader alerted me to a spirit nest building and experiencing event in San Rafael, CA at this link. Once installed the nest will be up through April 2019.
art bird linocut random seeing story-in-the-day textiles