January 07, 2019
I started the new year by being a student in a fabric marbling workshop with Pietro Accardi at San Francisco Center for the Book this past Sunday. I don't take many classes, and this was a treat. The hours of the class were 9:30am to 5:30pm, and within that time frame we introduced ourselves, watched Pietro demonstrate three different patterns, and worked individually to create twelve designs of our own, and with his expert guidance.

Specially formulated acrylic-based paints are used for this process, which he buys from Prochemical and Dye. 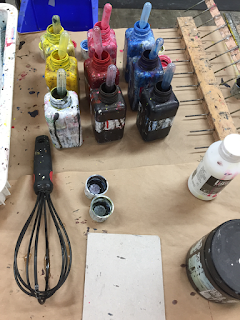 Fabric marbling has several steps, the first of which he kindly and generously front-loaded for us: the scouring of the fabric and the application of an alum/water mixture sponged on one side. Each of us were given twelve, pre-cut, pre-treated pieces of fabric: six of a lesser quality cotton, six of his preferred fabric, Pimatex cotton (available from Dharma Trading Co.). To start, all we had to do was cut off any loose threads.

And prepare the bath. Powdered carageenan (seaweed, a thickener) is whisked into a tray of water and let sit for about two hours. Pietro says most people mix it in a blender and let it sit overnight, but he likes to do it by hand, making it almost spiritual. While we whisked the powder in, a little at a time, the Center had some soothing music playing.

I only thought to take photos once he had begun. Here was the first pattern, and Pietro is laying a sheet on the water. 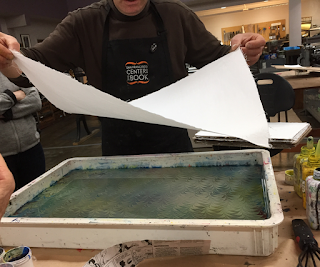 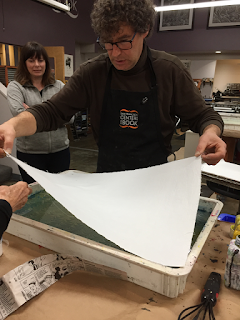 Pulling it up. (He also put down and pulled up strips of paper to remove excess ink around the edges). 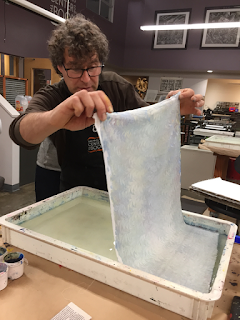 Squeegeeing the excess water/carageenan mixture against one of the wrungs of the drying rack. 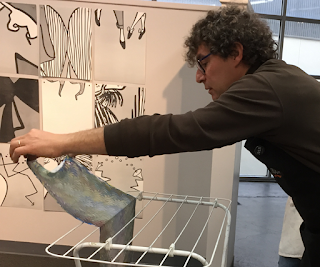 In between, he whisked the bath, fanned the bubbles out with a piece of cardboard, and skimmed the water with newsprint.

Then, on to a new pattern. 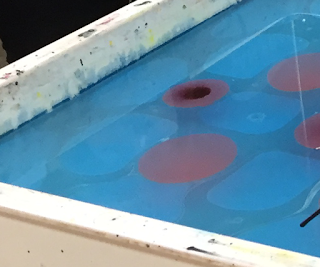 He used a wide variety of combing tools that he had made from wood, nails, and pins, as well as a pipette, which he also used to apply the paint. As he used the tools he said he was "stretching" the paint. 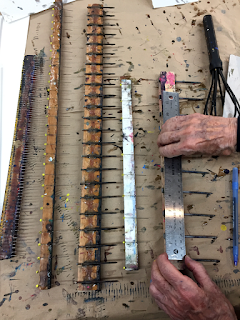 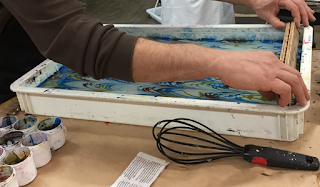 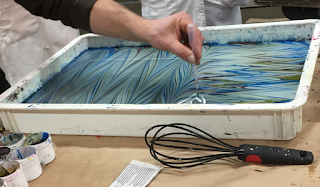 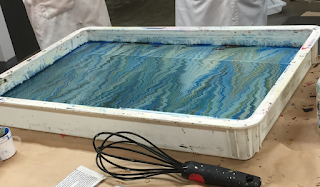 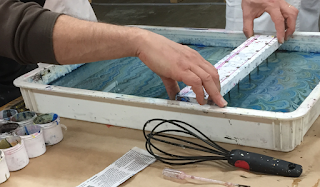 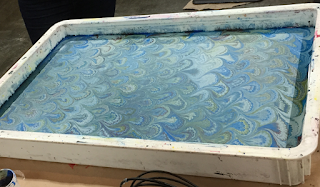 Pietro's three different patterns (L to R): the palm, the bouquet or peacock, and the tornado. 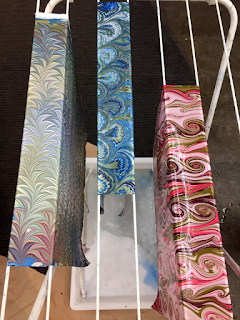 With my first piece, I played with a variety of tools and approaches, to a messy end. I decided I needed to master something first, before I made up my own way.

So, I kept practicing the chevron pattern, which is a basis for many other, if not most, patterns. The printmaker in me wanted to get it right, and I liked how it looked like feathers. At one point, Pietro called it "the Alisa pattern" because I had made so many. My classmates were trying all kinds of things and doing some fantastic experiments. After being startled at the bright blue, I stuck to the same palette of the shaded blue, red, yellow so I could possibly use the unified palette in one project. This was my batch. The first six were on the inferior cotton cloth. The two on the left were my made-up attempts. 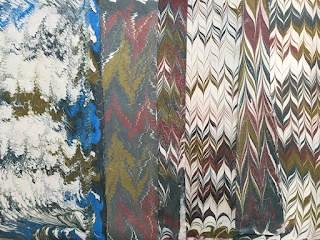 The second round was on the Pimatex. I also started using more paint. 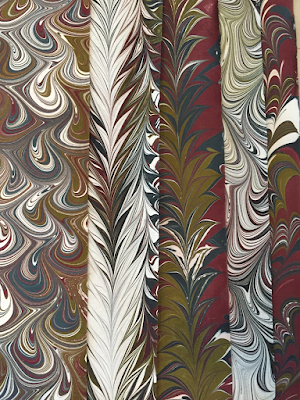 After they are dry, you iron them, then you can back them and use them to cover books or boxes, or in a sewing project, which I am likely to do. A few of my favorite full-sheet patterns. 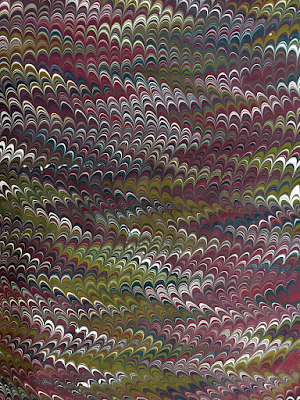 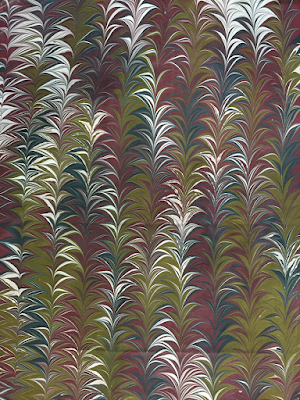 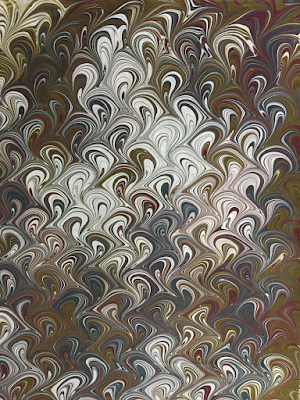 I liked watching Pietro teach. He would come over and look deeply at whatever a student was doing, then make a tiny suggestion. He knew instinctively what pattern would work with however the ink was laid out in the water, and what to suggest. When I complained that one pattern was too dark, he suggested adding white to it to open it up. When I sighed that one of my patterns was too white, he showed me a technique for sprinkling the white next time like more of a mist. When I asked how to do a particular pattern, he gently steered me to something better for the base I had prepared.

By the end of the day, some of the alum from the treated cloth got released into the water and disrupted the patterns a little (you can see it in the middle photo of the three, above). It happened to many of us, and Pietro said that aside from trying to clean the top, remaking the bath is the only thing you can do to get rid of it.

I was satisfied with the process and progress. I found out that one can't do armchair marbling. While it helps to have other kinds of experience, it isn't enough. To make something nice, one must have good materials in hand, and one must practice. There were several patterns I didn't get to do, but there is sometimes a "Marbling Lab" scheduled, so I may need to go back.

A very beautiful book he had out was The Art of Marbled Paper: Marbled Patterns and How to Make Them by Einen Miura. I was told it was in the Center's library.

You can see more of Pietro Accardi's work at his website: http://www.accardibookarts.com
Looks like he is teaching Intro to Western Paper Marbling at SFCB on Saturday, April 27. I highly recommend it! He is a master of the craft and a fine teacher.

Velma Bolyard said…
i really like how you responded to the instruction, and how you noticed Pietro's teaching methodology. That's helpful to read. The cloths you marbled are wonderful.
January 13, 2019 at 5:14 AM

Alisa said…
Thanks, Velma! Now I have to wait until the cloths speak their project.

Your new slot and tab books look so beautiful! I can feel them from somewhere primal, down deep. Will you be bringing them to Codex?