Then There Was the Codex Book Fair, 2019

February 07, 2019
It was my first Codex without a bookmaking class to bring. It also meant I had no excuse to buy anything. But there was never any doubt that I would go. I went on Monday, the second day of the fair, and my goal was that I would get all the way around plus talk to everyone I knew. An interesting challenge.

As a distraction, the new Richmond ferry terminal is up and running, just across from the Craneway, where Codex is held. Service to and from San Francisco during commute hours began in January. 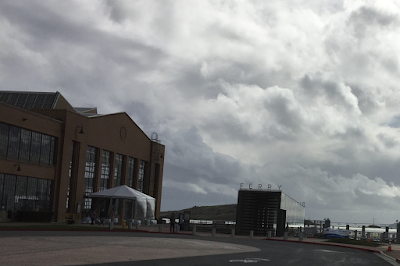 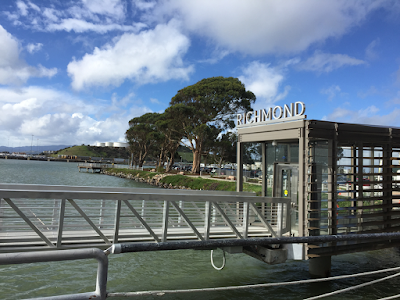 Once inside, I began my purchases with two cards from Erin McAdams, who recreates old and antique products as contemporary commentaries. 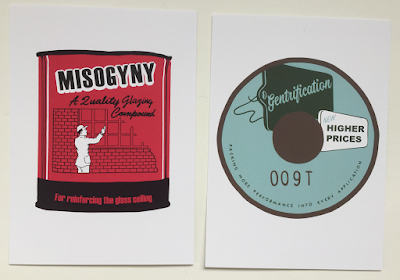 But I had a few people from out of town I knew I wanted to see. First, I wanted to make sure I met Velma Bolyard, who lives in upstate New York, and whose blog I follow. Brighton Press from San Diego is a favorite. Their books have the earthy colors I love and such a beautiful sensitivity to materials, design, craft, texture, and feel. They gave me a little promo booklet, the snake book format,  that tells their story. 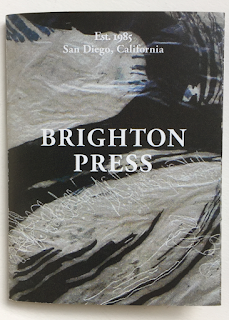 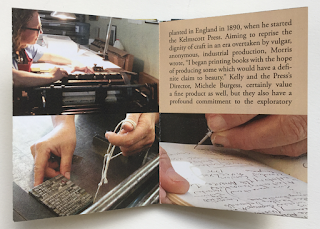 I love this line: "If the books begin with the human touch in mind, so do they become fully realized only in the hands of the reader." The information and emotions cannot communicate without that interaction with and that collaboration from the viewer. In addition, their books demand touch, "for in touching the pages, the reader confronts the passion of their makers." If you are a maker of any kind, you can understand the sentiment; only if someone fully engages with your work will they feel close to what you feel. And if you are a reader/viewer/collaborator, you know that if you are given a chance to touch, smell, hear the pages you can pick up some of maker's excitement for materials, as if they left a present for you. The spark may even transfer and inspire you to create something yourself. 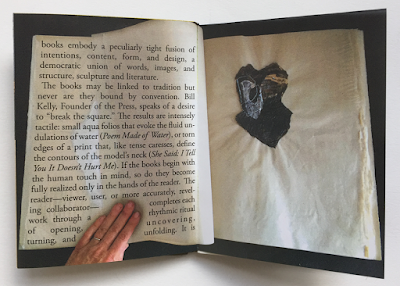 Sara Langworthy is another favorite of mine who is conscious of textures, marks, and layers. I love her attention to those human traces and both the spaciousness and the craft of her books. The viewers have a chance to absorb and think as they turn the pages. I bought a new small book, Wandering Stars, made from a fragmented poem and offcuts of her much larger, upcoming work, Sidereal, and asked if she had seen the exhibit that I didn't need to name because everyone had asked her that. For the reader, it was the Vija Celmins exhibit at SFMOMA, because: stars. 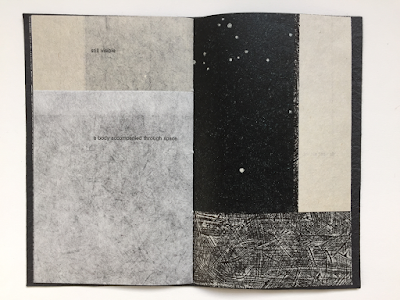 And I always enjoy a visit with Emily Martin, Naughty Dog Press. Her sense of humor is everpresent in her books. A particularly interesting one was a box with several puppets that comment on the current leader of the USA: King Leer: A Tragedy in Five Puppets. You can see a video on her website, here. Or straight to the video, here. She's holding up a paper construction, a little keepsake with a mouth that moves. 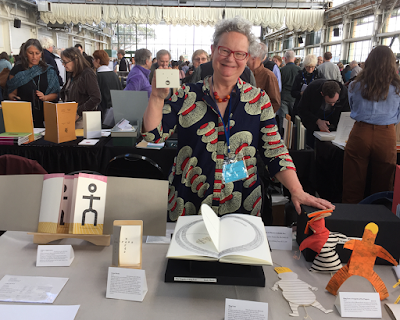 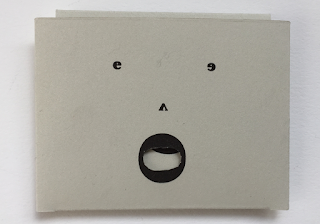 So many more that I cannot name without going on for pages. Julie Chen, Flying Fish Press, outdid herself with a new book, several years in the making, a book about intellectual learning and learning by touch, based on a conversation between Julie and her grown daughter. Julie realized that she learns by reading and thinking, but her daughter has to handle something, touch it to really understand it. The book shows both approaches through images, text, cutouts, symbols, and cast paper. 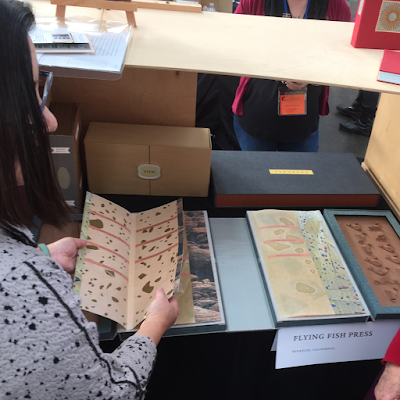 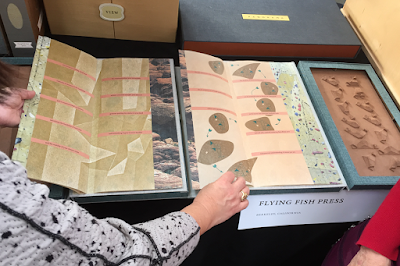 Kathy Abbott, at Tomorrow's Past, was amused and thrilled when I said I was a fan. "I didn't know we had fans!" she said. I explained I knew about their work from the work of Carmencho Arregui, the designer of the Crossed-Structure Binding. I knew they reimagined old, damaged books of no or little monetary value and thoughtfully and artfully rebound them. I asked for a tour of the books on display. One binder makes solid gold staples and used those in her binding (the book Kathy is holding in the photo). Kathy also showed me her book, which had the original marbled paper still attached, but she had had to redo the spine. And she spent two days painting the spine joints to match the marbled paper. 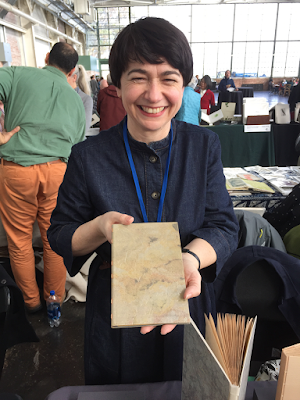 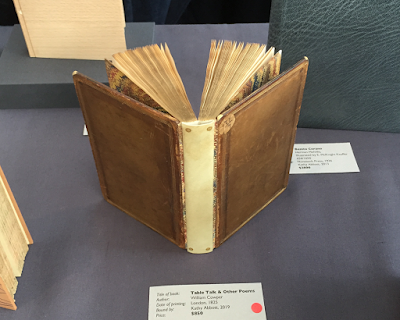 As if we had known each other for years, I spent a long time talking with Velma Bolyard and her daughter and then looking at the contact prints, eco-dyed on Arches Text Wove paper. The papers are much more beautiful in person than a photo on the web; you really do have to handle them, but I'll show you what I bought anyway. Flurries of activity around their booth; I don't believe anyone has ever offered these papers for sale before. Velma said she wanted people to use them, that's what they were for. I bought four strips. Uh oh. 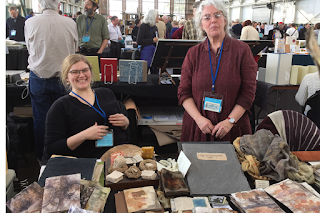 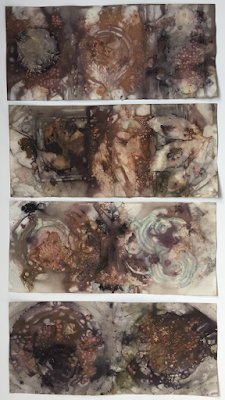 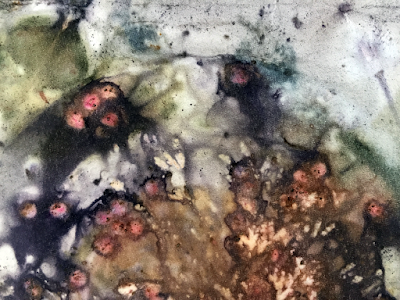 detail
Velma says the green is particularly hard to get.

Jennie Hinchcliff, the awesome, bounded out from behind the SF Center for the Book table to say hi. She works there now as their exhibition coordinator, a job she also holds at the Bancroft Library at UC Berkeley. We talked about buying books and making books and all those bins of things we've made. "I wish I collected feathers," she said. "They would be so much lighter."

By the end, I was so tired I couldn't leave. I stopped by to talk to Nikki Thompson, Deconstructed Artichoke Press. She showed me her latest book, a tunnel book homage to the Japanese film director Yasujiro Ozu (1903-1963). Nikki said she's been wanting to make this book for years, that she is interested in Ozu's perspective, in which many of his films are shot from the ground up (wikipedia calls this the "tatami shot"), even when the characters are talking to one another. See that basket up there? Her four-year-old daughter proclaimed she was a book artist, and she colored and folded some construction papers, then stated that they were "seventy dollars." Nikki added "price negotiable" on the sign. I love four-year-olds! 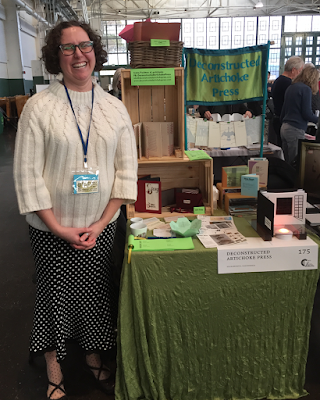 Also nice to see Colette Fu's photographic pop-ups in person! They are detailed. Quite amazing. Colette wasn't there the first time I visited. The second time was near closing and she seemed done. She was showing a box to someone, "I had all these VistaPrint cards made and look how many I have left." I saw there were tons. "I'll take one!" I said. 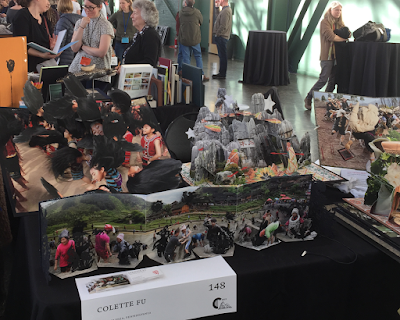 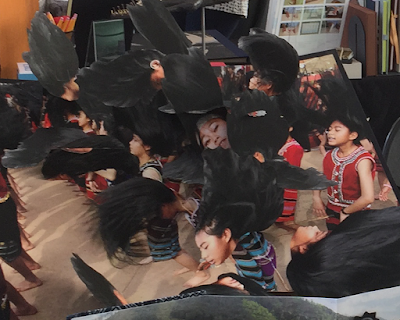 On my last legs, I stopped back to talk with Casey Gardner again. She had taken my bookmaking class at CCA a while back when she was working toward a second degree. We talked about drawing. I mentioned that I had become more conscious about drawing for printmaking, that many prints look really good anyway, but if you start with a great drawing, they are even better. She said it doesn't come naturally for her, she didn't grow up drawing, so it's harder for her. We talked about how you can work on an image, but then it has to come from inside. It's like you have to embody it. From practice to heart to the world. 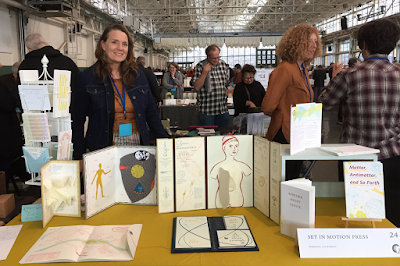 From one to five-thirty I got around. I've left out hours of conversations and people. And I missed a few people whose work I would have liked to meet and with whom I would have liked to talk, so a shout out and hello to Ellen Knudson, Rebecca Chamlee, Andie Thrams, Kitty Maryatt, Robin Price, Harry Reese, and John DeMerritt. Oh dear, I am sure there are many others I have left out. So be it. Next time! 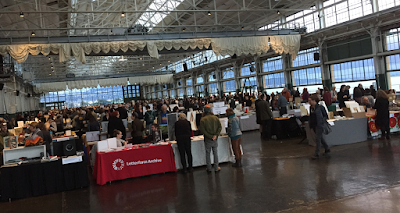 Goodbye Craneway. Nearly dark when I left. A beautiful day. 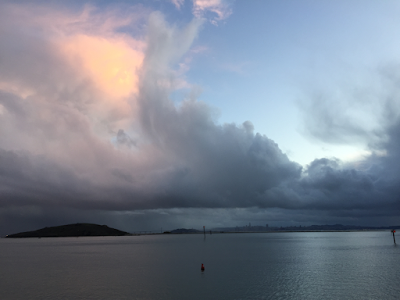 Alisa said…
You're welcome, Bea. It's really a stunning event. This year, at least the day I went, I felt that both the crowd and the vendors were seasoned and savvy. The viewers understand what they are looking at, after seven years, finally!
February 7, 2019 at 9:50 AM

Velma Bolyard said…
Codex was incredible, but even more so was meeting the people of the book, especially you. Thank you for the mention here and for liking my papers. And for breakfast. Hannah and I had a wonderful morning.
February 7, 2019 at 1:03 PM

Cappuccinoandartjournal.blogspot.com said…
I was there Monday too -- too bad we didn't meet. Wasn't it wonderful? Did you visit Red Fox Press? That's where i dropped all my dough!
February 7, 2019 at 1:20 PM

Alisa said…
Velma, you are so welcome! Such a pleasure! I realized it has been at least six years corresponding or reading each other's blogs. It was definitely time to meet and I'm glad that time arrived.
February 7, 2019 at 4:55 PM

Alisa said…
Pamela,
Ah, next time! I wasn't aware of Red Fox Press, but since you mentioned them, I checked out their website just now and they look like a lot of fun. So much to see. So much to miss.
February 7, 2019 at 4:57 PM