July 07, 2019
Childhood nostalgia: waving sparklers on the beach, standing in a city park with humanmade stars bursting over my head. A little thrill of beauty. I can still watch fireworks from a distance out my window on July 3, when the city of Richmond sets them off. This year, I caught one like a dandelion. 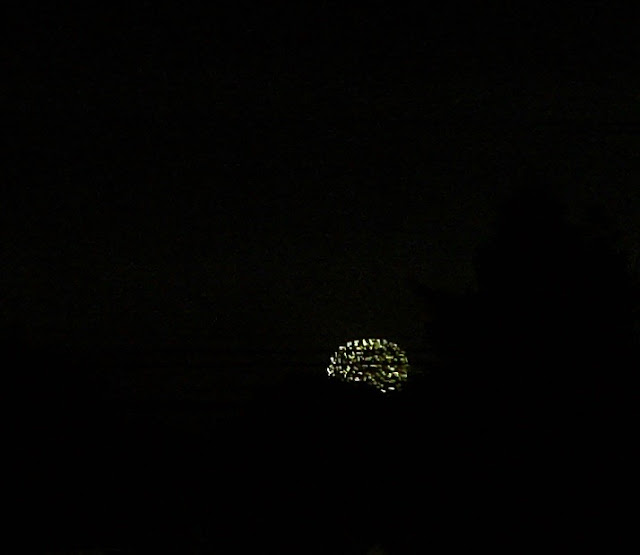 At the same time, I had my laptop on the bed with two screens open, one watching the Osprey family via Golden Gate Audubon Society's sfbayospreys.org nest camera, which had gone from color to black and white (infrared allows us to see them, but the Ospreys can't see the light) and one watching the same fireworks via the sfbayospreys.org "around the nest" or "ATN" camera. Kind of hilarious watching in black and white. 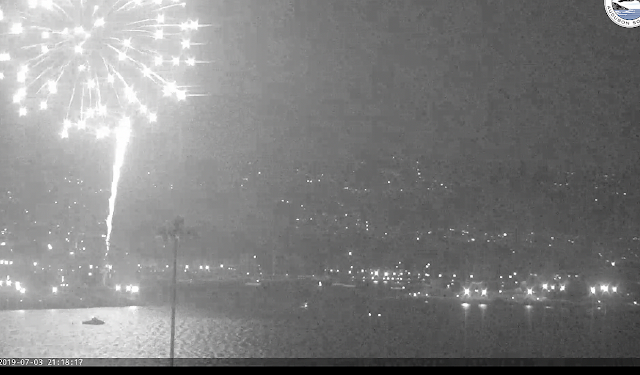 The younger fledgling, Kiskasit (banded ZK) was staying put on the cable spool where I had seen her, her brother, Peace-Up (WP), with their father, Richmond earlier in the day.

I had been down to the nest when Richmond brought them a fish. The flag is on the Red Oak Victory ship that is next to the whirley crane, where the nest is. 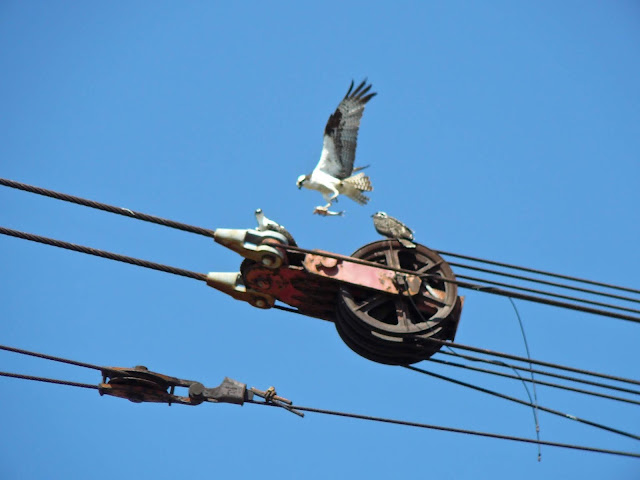 Near dusk, Peace-Up took off from the nest. Richmond brought in a dinner fish and left it on the nest. Rosie took it, then flew away; it looked like she wasn't sure where to take it. Would she eat first? Bring it to her fledglings? To which one? Where were they? She came back to the nest, then took off again. Peace-Up returned. Where was the fish? At the first boom Peace-Up stood bolt upright on the nest. 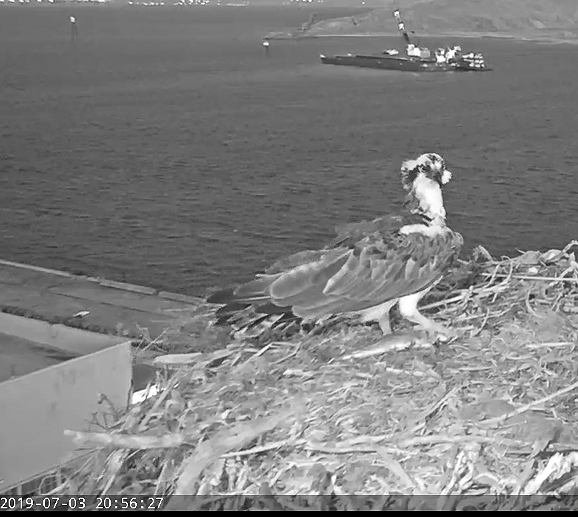 Rosie with fish (web camera screenshot; that's a dredger in the bay behind her)

Rosie eventually returned to stay with Peace-Up. Kiskasit stayed on the spool. Richmond stayed with her on the cable for the night. Peace-Up hung his head for a long time afterwards.

People with pets know that the loud sounds of fireworks send their animals hiding or running or howling, and every year some pets run away. The Ospreys made it through the first round of fireworks and apparently through the second round as well, although I didn't watch. The evening of July Fourth, there were simultaneous displays all around the bay, official or not, it was hard to tell. I could hear them from 9pm until just after 11pm and could see flashes here and there. I read back on the "Live Chat" that both fledglings stayed on the nest and slept there, all tucked in, heads under wings. That's over. For now.

A friend brought up an important issue regarding noise from the fireworks. What about veterans? People with PTSD? What about those who have survived gun violence? Why do we have fireworks again? According to wikipedia, fireworks, based on gunpowder, originated in China (960-1279) and are still manufactured there today. Originally they were thought to "expel ghosts, ward off evils, and bring about luck and happiness." So you could say they have a militaristic beginning.

Fireworks are like many things in life that we take for granted as being fixed or permanent; it's good to question our part in their use and to think about what and who is affected. Perhaps there are other ways to celebrate that are beneficial and enjoyable to all.
bird discussion story-in-the-day