I Hadn't Intended to See the Peter Paul Rubens Exhibit

July 12, 2019
I hadn't intended to see the Peter Paul Rubens exhibit, but I did want to see Charles Hobson's book art show, and possibly the French print collection, so a friend and I made the trek out to the Legion of Honor. My friend did want to see the special Rubens exhibit, and we were there early on a Sunday, and it wasn't crowded, so we took a look. I'm not much interested in Rubens, the 17th century, or huge oil paintings, but I also didn't know much about him. In the often-quoted line 56 in the poem "A Servant to Servant" by Robert Frost, "He says the best way out is always through." And so I would go through, even though the paintings initially repelled me.

Confronted first with two massive biblical paintings, I was struck by the crowded canvases, the number of muscular bodies that populated them. For "Daniel in the Lion's Den" how did he get access to all those lions? They are beautiful lions. My friend remarked that the story was always one that intrigued her, probably a result of Sunday school storytelling when she was a child. In the painting of an angel with Lot and his family I noticed that the angel gripping Lot's elbow didn't really seem to have a grip at all. In fact, in many of the paintings, the figures, although overlapping, felt isolated, like collage cutouts. The combined work of his assistants? Each having a specialty: skin, arms, muscles, drapery, fur? This floatiness added to the eerie quality of the work.

So many people! He must have been a social dude, which in fact, he was. There are only a few portraits that were not commissioned, and they were of his family. I was particularly intrigued by the portrait of his wife. She seems amused, a little wary, smart, and pretty. He appeared to capture her personality, as he seemed to do with all the other figures.

A relief, and quite a contrast to the bustling scenes, was the lone "Angel" (1610-1611) on a "modern support transferred from wood panel" that was "originally installed atop the massive winged triptych that housed Rubens's altarpiece The Raising of the Cross." The wall text also explains that Rubens painted this figure himself, which suggests any number of assistants elsewhere. 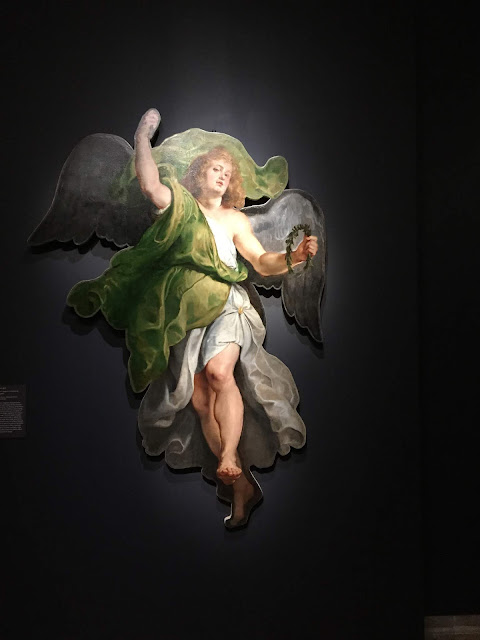 She? He? A very muscular angel. Various texts mention "gender-bending" but I am not sure if this is just an overlay of today's culture onto Rubens and his time or not.

The exhibit has so many large works, it was easier to get through them than it usually is in a prominent artist's special exhibition. It also contained some engravings based on some of the paintings. I was pleased to be able to go back and forth between an engraving and a painting to see how it translated. He did not do the engravings; this was left to a specialist. Wall text about the prints explained that Rubens wanted the best engraver, one who could capture his style, rather than a famous or celebrated engraver. And the translation from the enormous scale of colorful oil painting to smaller scale black and white was quite impressive. I only noticed one thing. As a printmaker, I create a drawing, trace it, then flip it so it will come out right-reading. Here, the image is not flipped, it is a mirror image. What is strange is that Rubens's work is so narrative, it would seem important to "read" it from left to right. This changes in the engraving. Sometimes it looks better, sometimes it doesn't make as much sense. Can't ask him, so we won't know. Unless someone has studied this for their thesis somewhere, which is possible.

So, all told, I gained something. I still am not overly fond of the work, but I feel a better understanding of it. And I'm glad I do. In this world where we are currently looking for things we like and things that match our interests, I think it's good to get out of our comfort zone and get "through" something that may initially not attract us. It's a good chance to learn.

Rubens is there until September 8, 2019. Charles Hobson's book art exhibition Small Inventions has been extended to July 14, 2019 (a catalogue is available in the museum store).

Nancy Penner Dormer said…
I really enjoyed your experience with an artist that was not your fav.
And the added bonus, I further researched Charles Hobson.
I found a great video where he describes three of his artists books.
Thanks for your sharing.
Always something new to learn and experience.
Nancy in Calgary, Canada.
July 13, 2019 at 7:51 AM

sylviaweir.wordpress.com said…
I would suggest reading the story about Daniel and Lot; that may make the paintings more clear to you. Daniel was cast into the den of lions and also a furnace--Lot was guided and reminded not to look back---his wife did and turned into a pillar of salt.

I'm surprised there wasn't a summary of the story in the captions along each painting.

I'm always in awe of these paintings as I always wonder how they managed to paint them--ladders? extre long brushes?

There are some huge canvases at the MFA in Houston Tx and even larger in teh Cy Twombly gallery of the Menil.
July 13, 2019 at 12:31 PM

Sue Rostron said…
Hi I am a new follower (from Aoteraoa, New Zealand).
This is a great post and encouraged me to get out and visit exhibitions again. Thank you for that.
July 13, 2019 at 2:50 PM

Alisa said…
Nancy, yes, Charles does some amazing books! I've known him for years and just may do a blog post about him.

sylviaweir: Thanks for writing. I'm familiar with the stories Rubens paints, that wasn't really the issue for me. I'm just not crazy about the painting style, colors, composition…but I appreciate it for what it is now that I've spent some time with it.