July 18, 2019
For the second book of my planned three of "Birds of the Bible," I'm in the process of binding Raven, referring to the first bird Noah sent out after the Flood. Suminagashi was clearly the look I needed. It captures water in motion. I printed several linocuts of ravens on top of it and inset one raven print into the cover of a Coptic bound journal now at nevermindtheart (scroll down for photo). 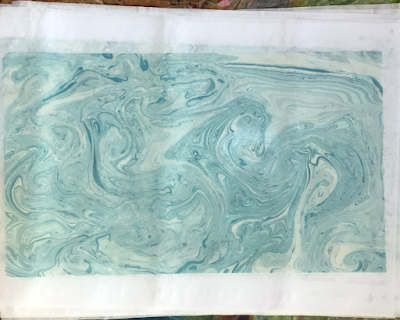 For my vat, I used a plastic bin, the kind that goes under the bed and holds shoes and stuff. It measured 16" x 35" and was perfect for an approximate half sheet of Mulberry paper, which I cut down to 15" x 25". 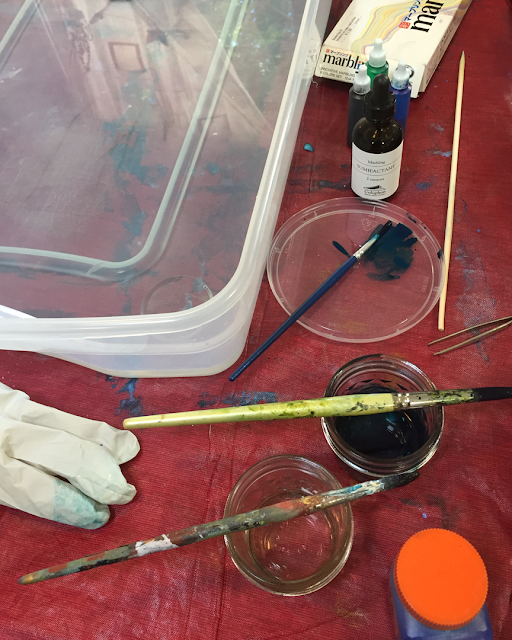 Because I knew I would need to stack my prints, I bought some Pellon, medium-weight, sewable interfacing. It is 100% polyester so does not absorb the water or stick to the prints. Papermakers often use this between sheets, which was how I learned about it. I bought a bolt of 15 yards and cut it down into sheets slightly larger than my cut paper.

Although I ordered a large size of blue ink, I nearly got by on the small-sized squeeze bottle from the kit I already had (you can see this in my January post, "Kitchen Table Suminagashi Experiments.")

Blue mixed with a about three drops of black. And blue mixed with green and one drop of black. Over the course of printing I learned that it is best to work with only about a teaspoon  of ink at a time, decanting from the main mixed batch to your cup or palette as needed. I believe this helped the strength of the colors.

This time I had bought Sumifactant from Colophon Arts. I added one drop to each of my colors and put a few drops in a jar by itself; it would create open areas where the paper color (white) would show through. It comes in a small dropper bottle, but sure to last forever at this rate.

It took many experiments to get the effect I wanted, which was rolling waves. The basic, initial design is like tree rings, so I disrupted that with a bamboo skewer. (An aside: I once bought a "104-Piece Wok Set." It turned out that 100 of the pieces were bamboo skewers.) Bamboo skewers can usually be found in a grocery store for a dollar or two for a pack. Blowing on the water helped as well.

Hold two brushes at a time so you can alternate the ink and sumifactant. (I had a third color for part of the time.) Rest forearms on the vat and make concentric circles. The more circles, the more ink you have to work with on your print since the surfactant and clear water areas will show the white paper.

You only need a couple inches of water in the tray, and the paper picks up all of the ink so the water stays clear. Occasionally, a drop of ink will sink, but it did not affect my prints. I also experimented on cotton cloth, which creates an interesting effect, but not as detailed. Silk would work better, I think. 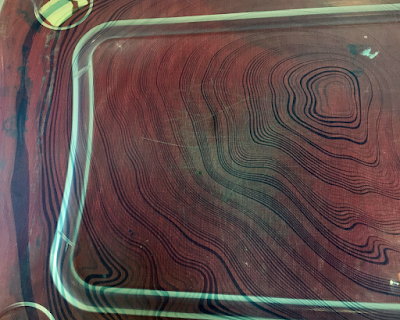 the vat (on red vinyl tablecloth! use a white one to see better!)
"tree rings" that I disrupted to make wave patterns

After ten prints or so, I started trying to refine the technical aspects: waiting for the ink to stop moving before I printed, placing the paper without air bubbles. My paper was smaller than the vat, so I started placing extra strips on the open area to pull up the extra ink even though that ink did not appear to affect the large print.

After stacking and sandwiching the prints between the Pellon, I pulled them out to dry on large pieces of cardboard. When those were dry, I replaced them with damp prints. I kept the studio warm, and the papers dried within several hours. 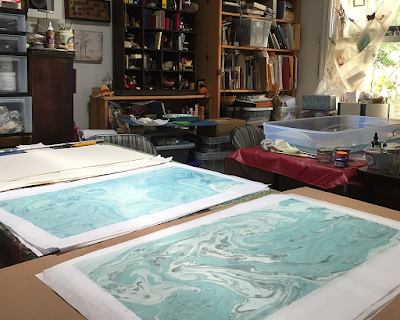 It was a quiet and lovely and absorbing process. Breath and ink and water. 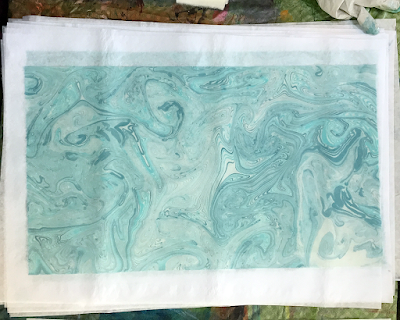 Although I only needed thirty-six for an edition of eighteen, I printed fifty to have a choice; no two were the same. Here is where nature came into play, reminding us that we humans cannot control the movement of water.

I'm offering one of the raven prints on the suminagashi paper, inset into the cover of a Coptic bound journal at nevermindtheart. The journal has a nice, thick 80 lb. Strathmore Drawing paper with storm-blue Canson dividers that can be used to hold collages or pasted-in images. Approximately 50 pages. Blue and black waxed linen threads. Distressed cover. Fly, raven, fly! 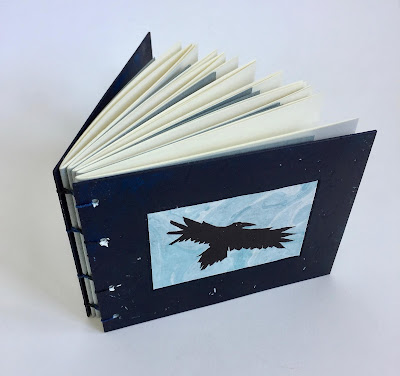