My Summer Reading So Far

August 16, 2019
We've got art, we've got poetry, biography, art history, a fictional chronicle, and short stories, but each and every book contains a compelling story, I think. Here are the physical books that have been on the nightstand and propped up before bedtime this summer. In random order.

Diderot and the Art of Thinking Freely by Andrew S. Curran. Who knew Diderot was such a wily guy? Curran writes so seamlessly that I almost felt that I was reading Diderot's words himself. Diderot had such a curiosity and passion for learning and was able to combine all of his interests by his lifelong task of compiling an encyclopedia (with help from many, many experts and lay people). During the time when he lived it was blasphemous to say anything against the church, and his philosophical views put him at odds with the culture, which also landed him in prison. Talk about freedom of the press. It was a different era and a different country, but feels relevant to today.

Blue Laws: Selected and Uncollected Poems, 1995-2015 by Kevin Young. This is a great and hefty volume. I was not able to finish all the poems before it was due because I had too many books checked out at once, and it was new so I couldn't renew it, but what I read did inspire me.

Ninth Street Women: Lee Krasner, Elaine de Kooning, Grace Hartigan, Joan Mitchell, and Helen Frankenthaler: Five Painters and the Movement That Changed Modern Art by Mary Gabriel. I'm completely knocked over by this book. Yes, it has over 700 pages, but the interweaving of these five artist is gripping, maddening, beautiful, and compelling.  Got adjectives? I can use them. Mary Gabriel made each of her subjects jump right off the page. Sometimes I felt I was one or the other. I definitely wanted to get up and paint.

Lee Krasner - A Catalogue Raisonne. The above book got me wondering more about Krasner's work since it does not have many examples. The colors and shapes and methods are inspiring. I am particularly attracted to the collages she made with torn up paintings and her work of the 1950s, '60s, and '70s: her "Little Image" paintings, calligraphic ones that look like writing. This annotated, full catalogue of her work is a must-see for anyone who is even remotely interested in Abstract Expressionism.

Enticement by Pema Tseden. From the library I had checked out one of Tseden's famous films, Tharlo, and inside the case was the novella on which the film was based. It was kind of a sad tale, with a trusting character who, even by the end, appears to retain his optimism. For that moment, reading the novella was enough. Later, I got the full set of stories to learn more about how people live and care for one another in the Tibetan setting and culture. I read elsewhere that he has a distinctive style as a filmmaker, sometimes employing long takes. Now I'm ready for the film.

Maggie Brown & Others: Stories by Peter Orner. Peter's stories have a compassion to them, a caring about humanity, and a humility engrained in each. At a recent book talk for this new collection of short stories, he explained that he has to "be fair" to his characters. To me that means each is due respect, whether they do wrong things or heroic things  or are just trying to make life work. I don't know whether I am drawn to them because I have always felt this way, or if he revealed this way of seeing in the graduate classes I took from him at San Francisco State University and they resonated at that time, paving my way forward. The first story was so beautiful that I put it down to contemplate it, then read it again twice more before deciding I would take my time as I go through this book to savor each story.

The Master of Go by Yasunari Kawabata, translated by Edward G. Seidensticker. I love the Japanese word and concept for a work of nonfiction that has been "embroidered and colored," (Seidensticker's description in the introduction) adding fictive elements: shosetsu. This book is that. Kawabata was a journalist, called upon in 1938 to report on the last game of Go by the Master, who was aging and ill. While it helps to know the basics of the game, the psychological reporting is clearly the most important part, the part that tells the story. The moods, the gestures, and emotions are all beautifully rendered. The overarching theme is how modern overshadows traditional. Kawabata indicated that this was his favorite book, although it is not as well known today as Snow Country or a few of his other works, including the interesting book of flash fiction, Palm-of-the-Hand Stories (FSG Classics).

Lots to chew on. There are more books to read. And more to re-read. 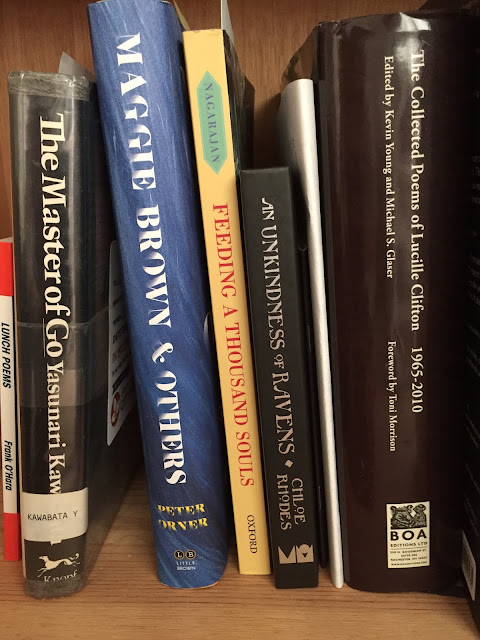