November 15, 2019
For National Novel Writing Month, I have been writing every day now on this one project for two weeks, not my usual practice. (My previous week is posted here.) Each day has been a continuation of the same setting, but also an interweaving of both old and new characters.

After Day 9, I was beginning to feel beat up. How many more plot points could there be? Could I really get through this? Since these characters interact, I was feeling like I was at an all-night party as well. Why is everybody talking so much? I need some space!

To give myself a refresher, on Day 10, I let myself go into a more lyrical, poetic mode, and essentially wrote a 1615-word prose poem, partly lyrical essay, which I think added mood and background to the story. I could keep up with my daily word count, pretty much, but it gave me a break from the way I had been working.

I was slightly dreading Day 11, but after my morning walk the image crystalized, and I knew where I would go with the story. Because I decided to work with some familiar concepts, things that I really knew, I was able to crank it out faster and more smoothly. What else do I think about all day and night? Art. So that was what my characters discussed. I got this session done early in the afternoon, which was nice.

Day 12. It was time to check back in with the character I thought of as my main character. What did she need to do? What was on her mind? I had planned that she would meet up with her cousin, but I knew that scene wouldn't take the full word count. What to do? I went for a walk, and as I focused on the problem and the character, the story started to take shape. Once I began, I did a little research as I worked, which gave me the overall theme of that particular story, which I did not know was already there.

It always seems like a miracle. I wake up every day these days, a little worried, thinking, "What on earth can I possibly write about today?" and "What do I want to say today?" and through walking and practicing, I seem to find it. Trust the process, I keep telling myself. I also like to fall back on what one of my first teachers in grad school, a very excellent teacher, the novelist Alice LaPlante, used to say, which was basically, "If you don't want to write a scene, don't write it! Skip over it! Write what you want to write."

Day 13. Another day, another quandary. Which character did I want to inhabit? It was my standing-date, birdwalk morning, so I didn't get the usual alone-thinking-time to start, and I came back still wondering. It was a foggy day, the tide was high, and there were many Mallard and Bufflehead ducks, Coots, cormorants, one Great Blue Heron, one Great Egret, Snowy Egrets, TVs, Crows, gulls, and sparrows around, but no Osprey sighting today. After lunch, I remembered something from my research, a tiny detail, and that one little thing activated a marginalized character, someone who had been useful in one story, but who had not gotten a voice, yet. And I was off and running, again. "If you build it, it will come" (1989, Field of Dreams). Trust the process.

Day 14. Where else can this story go? I woke up thinking I would solve one of the mysteries I had planned to pose, and I was able to do that in three writing sessions: one before the walk, one after, and one after lunch. Instead of limiting the interaction to just one situation, I created three mini scenes, which helped up the word count. The dialogue was fun to write as I tried to inhabit each character. The ending felt a little rushed and will need more development when it's all over and I get to the editing stage. I'm learning!


I'm also liking the ritual of brewing a pot of tea and my chicken mug cheers me, a good talisman. The image was originally by the printmaker Dan May of Oakland, CA (there is a different artist Dan May, not him), who doesn't seem to be doing this kind of work, at least not visible on the internet. Sometime after I had bought the mug I got to visit his studio, where he told me they don't make the mugs anymore. His work was very colorful and cheerful. I still have some of his folded notecards. 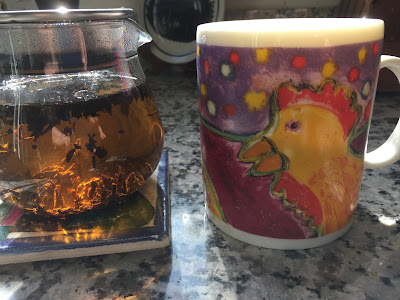