November 22, 2019
Day 15: Once again, I had no idea what story I would write. I woke up with a very interesting dream, but it made no sense at all in the context of my novel, so I wrote a postcard to a friend and didn't use the dream in my writing today. I had another loose end to tie up, so I took a walk, let it bump around, then worked on a story tying up the loose end, which ended up being more of My Dinner with Andre meets the Bird Channel. But it is not imperative to write the best, it is only important to write the most and to meet the goal. Editing comes later. I didn't think I could do it, but I squeezed out 1876 words. Whew! I think keeping this blog as a log helps.

Day 16: Saturdays are electronics-free days, so I have to write after sundown, and I'm usually tired by the end of the week. Was it prose poem time again? After a Saturday walk to the library and the rest of the day finishing up the hand-stitching on a new quilt, I began to feel that two of my characters needed to interact. I had been resisting their encounter, mostly because I didn't know what they were going to say to each other after a long absence and what words they could use that didn't sound expected. I set the scene and let them talk and walk together. I also knew I wanted a quiet night scene, so I included that at the end, which rounded out the total. It definitely could use some reworking, but the outline is there and waiting.

Day 17: Weird dreams all night: Obama was going around saying goodbye to people (we were his students?), and we were not to upset him; a woman named June died after a slap fight with another girl and the news was a surprise to me and made me cry, nothing that, on the surface, would make any sense at all in my stories. Perhaps the emotions. In waking life the day before, I heard that Bill Stewart, of Vamp and Tramp Booksellers just died; a great loss. He was a kind, thoughtful, and sweet man with a poet's soul.

My characters from yesterday were calling me, telling me they were hungry, that they had more to say and do. I decided to revisit yesterday's scene and add a real encounter I once had on the street. The session went much quicker, although it still had its slow moments. Because I needed another little scene, I also added a little piece of a previous dream that seemed to fit, and I was able to fulfill my word count before 11am. It was much easier relying on my memory for a model. That's not to say I didn't use my imagination, but it gave the story more structure. I'm going to try not to think about the novel too much the rest of the day.

Day 18: My artist character was pushing to do something, so I devoted my walk to trying to figure out what that would be. The writing went quickly today as I wrote about the creative process for this artist (one of my favorite subjects that I don't see in novels because novelists are writers, not usually visual artists). He met some colorful characters. And I incorporated a revision of last night's dream, which involved a challenge and a constraint, as well as a description of a place on which I had taken notes last year. The most exhilarating writing day in a while! I easily reached the 1800-word mark and passed it.

Day 19: I had to rely on my walk for this one. What else could happen in my setting? Which characters interested me? A bizarre thought occurred to me, and I knew which character would have an entertaining time dealing with the problem.

I got started late, after having spent the after-walk morning at Jered's Pottery, picking up Sarah Kobrinsky's new poetry book Nighttime on the Other Side of Everything from her there. (You can also get it from Small Press Distribution here. I published Sarah in Star 82 Review in issues 2.1 and 2.3 and Pocket Poems and 7.3.)

My story was fun to write, purely my imagination this time, but after 1600 words or so, it really was done. Still, I'm caught up! November 30 completion should be fine; my target of November 27 finish date is reachable.

Day 20: I woke up with nothing. It was bird-walk day, so I let it go until after lunch. I thought about my setting: what else could happen in this setting? I chose the action, then decided which character it would happen to, and how she would react. What was the conflict, and what were her individual problems that might compound the conflict? How would she handle it all, and how would it resolve? I folded in a version of something that had actually happened to me, and a hint of something I witnessed at the market today, but otherwise, it was imagination that filled out the day.

Day 21: I did not walk today. I dyed cloth UltraViolet purple and studied the grape-juice-colored vat for a sign. I kept thinking about my character from yesterday, and decided I wanted to hear her think about a philosophical issue (and a way to buy me some words), perhaps to re-insert into yesterday's writing when I go back and edit. In doing this I discovered a new plot point, which is good, because I keep feeling like I am running out. Today felt like a bit of a struggle, like I was giving blood through my fingers, or, like the old saw, "squeezing blood from a turnip." Except my turnip finally relented. I kept going back and revising, adding, adding, adding to the same session. I will eventually combine Day 20 and Day 21 into one story.

Keeping this daily log and posting it weekly has turned out to be an important part of my process. Probably what you can do with the NaNoWriMo website, but I'm doing it my way.
Thanks for reading!!!

So far, I'm getting all my badges! 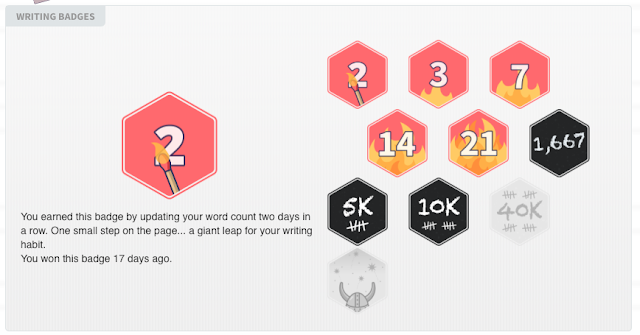 Lynn Cothern said…
I'm not writing a novel but am enjoying your progress vicariously. Also just want to let you know how much I like your blog. You have such a great combination of talents, so many interests, and are so articulate to boot. I always enjoy reading whatever it is you write about. And I've often consulted your books and blog entries when making my own books. Thank you!
November 23, 2019 at 5:42 AM