February 29, 2020
I really hadn't given much thought to frogs. I knew vaguely about the endangered red-legged frog, but I hadn't been following their ups and downs. So, when I had a dream about one I was puzzled, surprised even. From where had it hopped? The odd thing is that it was the last dream I had in 2019.

There are some postage stamps with frogs on them (that I had not been interested in previously). And I do like postage stamps. Obviously, I would have to do some mail art.

I drew my image and carved it out of linoleum, intending for a reduction print, which I printed. 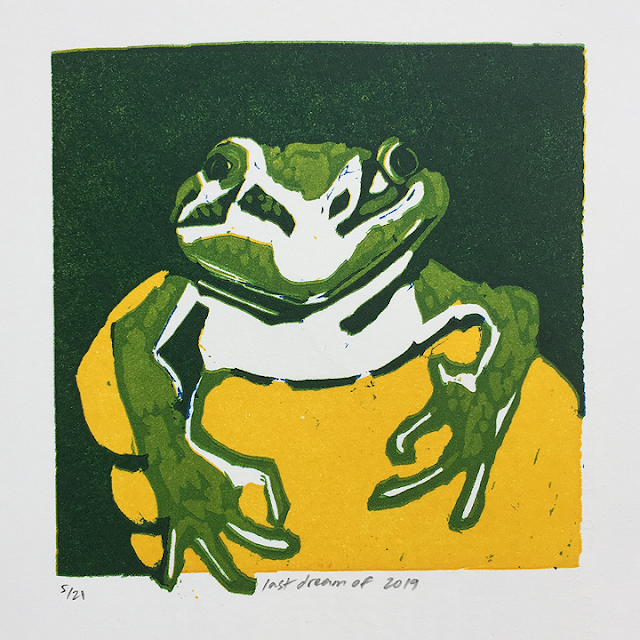 But my letterpress (likely manufactured in the 1950s) was complaining. There was no way I would be able to print text on the back without a house call from Alan Hillesheim, letterpress doctor (he also teaches a letterpress maintenance and other letterpress printing classes at SFCB).

After an hour or so he figured out one likely problem, had me cut a one-inch shim out of book board to re-align the mechanism, advised me to order new rubber rollers, and showed me some simple maintenance. (I've had this press since 1987, I should say, and it's amazing that it has gotten this far. But old machines were so much better made!) My rollers were glazed: that meant that the ink was just sliding over the form rather than laying it down properly.

I sent the cores to Ramco Rollers, a family-run business, and two weeks later the rollers returned, recovered. Literally. I recovered, too, and was able to print again, and so much easier! I printed my poem in spring green (yellow plus process blue). Printing blind (without ink, not without my glasses) on the back, I added my name and a frog engraving. And the stamp. 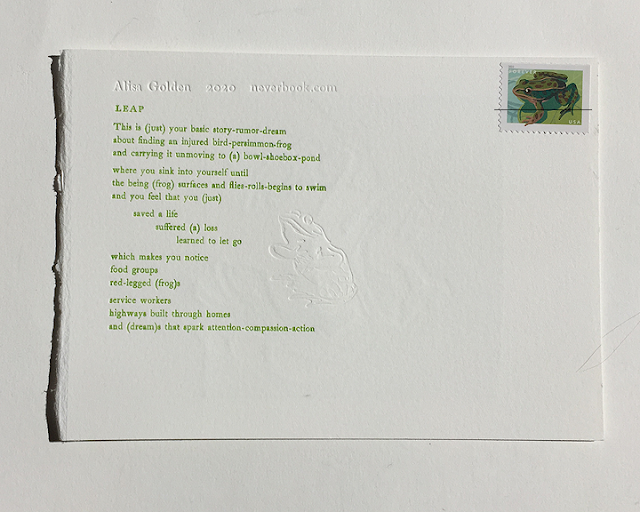 I sent Alan a picture of the press in printing progress, to which he replied, "Excellent. I want to hear that your life as a printer has reached heaven status." 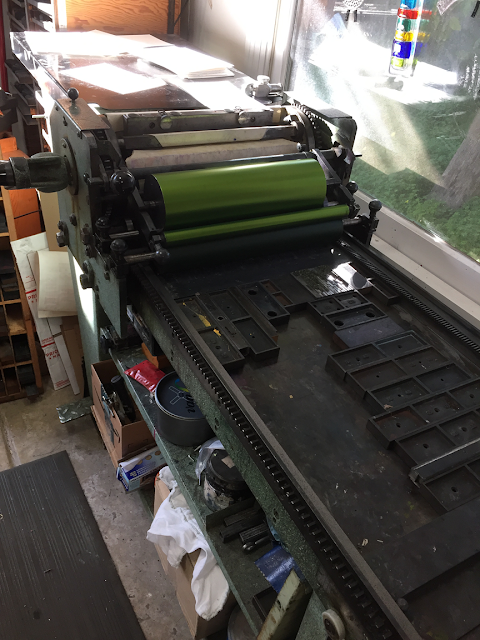 I'm still in shock, actually, but I don't have to perform incantations and contortions to get the press to print without complaining. On the stairway to heaven. Thank you, Alan!


Happy Leap Day to everyone!

P.S. I may have some unsigned seconds. If you would like one, send me your paper mail address, and I'll let you know.