What We Call Ourselves

February 10, 2020
It's interesting how we use language to communicate and hope the person with whom we are talking understands what we mean when we use certain words. Each word has its literal meaning, what it denotes and describes, and its emotional meaning, what it is linked to, particularly as it relates to our life experiences. It's hard to know if the two will align in our conversations, but we try.

Almost two years ago, to this date, I wrote about "Proficiency and Identity," and the notion that many people do not like to call themselves one thing or another: artist, writer, quilter, etc., for that very reason that the word didn't align with how they saw themselves. Earlier, in 2011, now nearly a decade ago, I settled on "maker" in a post, "The Maker's Continuum," as a good all-encompassing term for those who do not necessarily want to call themselves artist.

Words shift. They go in and out of style. They acquire new emotional meanings which perhaps become universal or worn, and for whatever reason, a new term slides into view. I recently read an article about how Katie Holten designed a tree font, based on street trees of New York City. What is fun about the article is how the city may create tree poems, or perhaps just words, based on the trees planted in a row. But the first thing that stood out to me was this phrase, "Holten is one of the first creatives to become an NYC Parks artist-in-residency." Aside from the strange usage of "artist-in-residency" rather than "artist-in-residence" (which could just be an error), I noticed the word describing her as a Creative.

Creative. Creatives. This was interesting to me. Calling oneself a Creative covers many bases and includes both designer and maker. A catch-all phrase, Creative could cover those who make conceptual, digital, mathematical, and other work as well. In this case, Holten, rather than making a physical object, came up with a concept and designed a font (okay, made a font), which will lead to an installation. 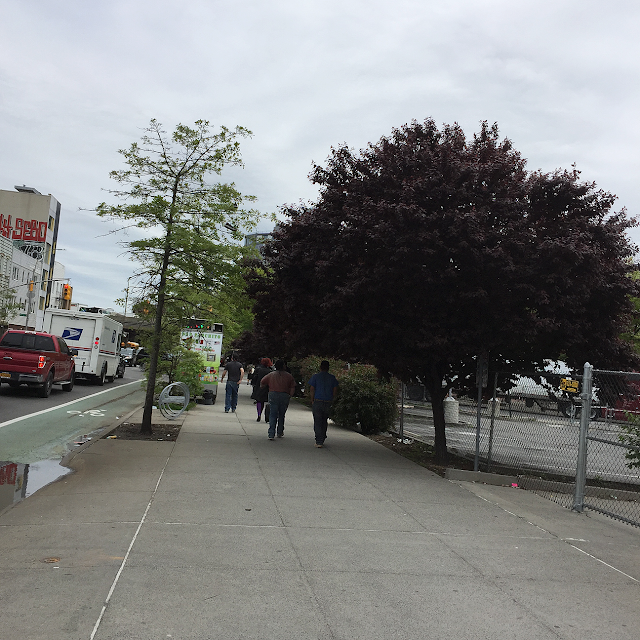 (Actual New York trees. Do I know what they are? Um, no.)

Me said…
It's definitely hard to find a good term. Somebody once suggested that since I felt it misleading to call myself an artist, I could say "student artist."

Unfortunately the term "creatives" has been co-opted by the craft industry. There are a very large number of "art" blogs (and YouTube videos and Facebook groups) with the goal of advertising and/or selling craft-quality art materials to customers they refer to as creatives. The marketed materials include paints, stamps and stamp sets, stamp pads, stencils, embossing powders, workshops, and many, many others. You are a creative simply if you make stuff with these materials, no skill required. RangerInk is a well-known example of a company that manufactures a number of these materials. Just a few weeks ago the Association for Creative Industries had their annual convention called Creativation 2020.

Alisa said…
Susan,
You bring up good points: how words get co-opted, and how everything these days is tied to customers and monetization, as well as pointing out the issue of "no skill required."

I'm fine with artist, which is what I've called myself since I was a kid, but not everyone is, I understand that. I guess it depends what one's goal is.