July 16, 2020
The American road trip books, Travels with Charley by John Steinbeck, and Blue Highways by William Least Heat-Moon, are both very good in different ways and have different perspectives, but I wondered: where were the road trip books by women or Black travelers? After a brief commune with fingers and keyboard I found Overground Railroad: The Green Book and the Roots of Black Travel in America by Candacy Taylor. It was published by Abrams in January 2020, and I fear the celebration of its release may have been overtaken by the coronavirus. While it was a more scholarly kind of road trip (and by the end, Blue Highways is, too), I was still interested. The library had six copies available; astonishingly, none were on hold. I tried out the new no-contact borrowing system for the physical book.

A synopsis mentions that Taylor drove across the United States taking photos of Green Book establishments that remained standing, so I hoped she also would have something personal to say about her trip, and she does so, here and there, to clarify an important point. In one instance, she mentions that her stepfather's cousin had been chased through a forest at night by the KKK and to her, driving, "Suddenly, this winding tree-lined road didn't look relaxing or beautiful. Even during the day, the forests appeared dark, ominous, and terrifying" (167). Her experience, traveling with this family story in mind, sheds light on a collective fear of remote nature areas, passed down through the generations. Perhaps it was to combat this fear as well as provide an important document of safe havens that the Green Book was conceived of and published by Victor Green. Safety concerns are still an issue for Taylor in the twenty-first century; she traveled "with a knife under my seat, a stun gun in the car door pocket, and Mace behind the gear shift" (18).

Taylor researched the Green Book in depth, and in her book she interweaves stories told by her stepfather as well as by others who experienced the overt racism, particularly of Jim Crow segregation, firsthand. She writes how Blacks who wanted to travel had to pack all their food since they never knew when they would be able to find a place that would serve them. The Green Book helped guide them to places where they might stay overnight or get a hot meal, otherwise they had to camp and eat cold food and relieve themselves by the side of the road. Black men would keep a chauffeur's cap in the car with them in case they were stopped by the police; if they said the car belonged to their boss and that they were the driver, they were hassled less. And the hassles occurred in the North as well as the South, which proved even more disheartening, to say the least. 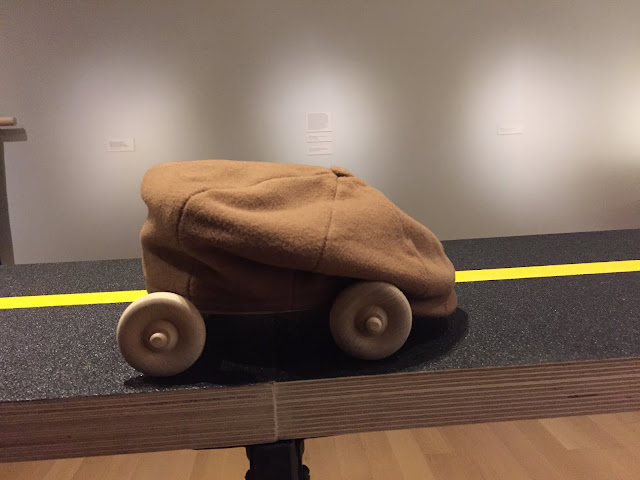 Along those disturbing lines, Taylor describes "Sundown towns," places where only a couple Blacks lived and/or where no other Blacks were allowed after sundown, which were common along the way, particularly in the North. I first heard the term in a Ry Cooder song "Sundown Town"on his album, My Name Is Buddy; I understand it better now. On her road trip Taylor mentions driving through Arkansas and seeing not a sign for a sundown town, but a white supremacist billboard that signaled the same racist attitude (49-50).

From the printing and publishing standpoint, the Green Book, created by a Black man, had a huge and positive impact on Black life. Victor Green was a postal worker and with first a colleague and then his wife, made the Green Book in his spare time. Distribution was at first by his co-workers, along their routes, and later through Esso gas stations. I was surprised to read that John D. Rockefeller's wife's family had been abolitionists and that their house had been a stop on the Underground Railroad. Rockefeller, CEO of Esso, became committed to promoting better treatment for Blacks, and he hired James A. Jackson, a Black marketing executive, and later, Wendell P. Alston. Both had used and were later able to promote the Green Book at Esso stations across the country, substantially widening the distribution.

It was difficult for Blacks to purchase automobiles: very few dealers would sell to them, those that would were listed in the Green Book. It was nearly impossible to get car insurance or loans, and those businesses that offered these services were also listed. Without loans it is hard to start businesses and purchase homes. If you can't build up credit, it's hard to boost your economic situation; banks don't want to take the risk, a viscious cycle. Some restaurants had separate menus for Blacks, with higher prices. The Green Book showed where you could get fair treatment, if not just service itself.

The Museum of Arts and Design in New York City featured an exhibition in 2018 called, Unpacking the Green Book, which I was fortunate to be able to see (although now I wish I had read Taylor's book before I had seen it). Most memorable to me, though, was Derrick Adams' installation of sculptural work, Sanctuary, which you can see and read about at the link. 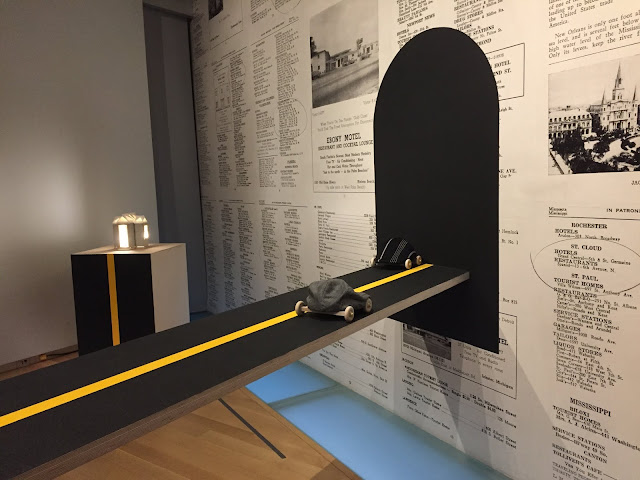 From Derrick Adams' 2018 exhibit, Sanctuary
I believe the wallpaper is made from facsimile Green Book pages

Taylor's road trip is a journey through time, pointing out the changes along the way, and the stagnant areas of attitude. Very few of the buildings listed in the Green Books survived. The Civil Rights Act was passed in 1964, the last edition of the Green Book was 1966-67. Victor Green, deceased by that time, had hoped the Green Book would some day not be needed. But perhaps continuing with a book of Black businesses would have been useful. Although white businesses then began accepting Black customers, white customers did not necessarily visit Black businesses, which likely hastened their closure. Today, on Etsy, I notice there is a link to Black-owned businesses, a step in a good direction. Taylor's book is a thorough and heart-wrenching look at Black travel, discrimination, and rights between 1936 and 1967, and a window into collective memory.

A good companion to Overground Railroad is the 2018 Sign My Name to Freedom: A Memoir of a Pioneering Life by Betty Reid Soskin (my 2017 blog post about her, here). Born in 1921, she is also the oldest park ranger in the National Park system, a system that once discouraged Black travelers. She writes about her personal experience with redlining, prejudice, and how she overcame many challenges in housing and business and schools.

Both books are tremendously helpful to understanding the structural racism in the USA. Change has been coming gradually, but it is not nearly enough.

Me said…
Did you ever read Howard Griffin’s “Black Like Me”? If not it’s easy to find a synopsis. It meets your current criteria in a rather unusual manner. I remember being fascinated by it years sgo and recommend it.