American Dream? A Journey on Route 66

My wanderer recommended this title by Shing Yin Khor, The American Dream?: A Journey on Route 66, to add another point of view to the road trips across the United States books I've been searching out and reading. The subtitle: Discovering Dinosaur Statues, Muffler Men, and the Perfect Breakfast Burrito gives a clue to the playfulness of the subject. Shing, a cartoonist (who refers to self as a girl in the book and uses the pronoun "they/them"), tells the lighthearted story of their journey through drawings, paintings, thought balloons, and captions: billed as "a graphic memoir." The inside description lists the book for "Audience: Ages: 11-18 | Audience: Grades: 9-12" which is already odd since in ninth grade a person is usually 15, and just because it has pictures doesn't mean it is only for young adults. I suppose you could say you were reading with your inner high school self, but why not just read it for pleasure?

Shing starts off on a spring day in Santa Monica, the western end of Route 66 with their "tiny adventure dog" Bug. I'll take you there first, for just a minute, to set the stage, if you don't mind, since I have some snapshots. 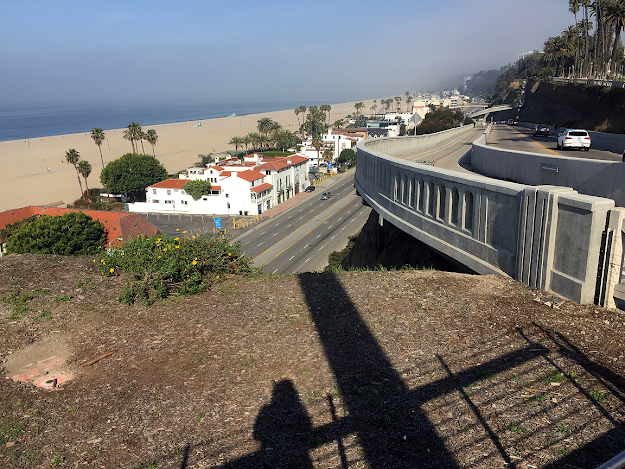 [Looking south towards Malibu, down at Highway 1 and the Pacific Ocean] 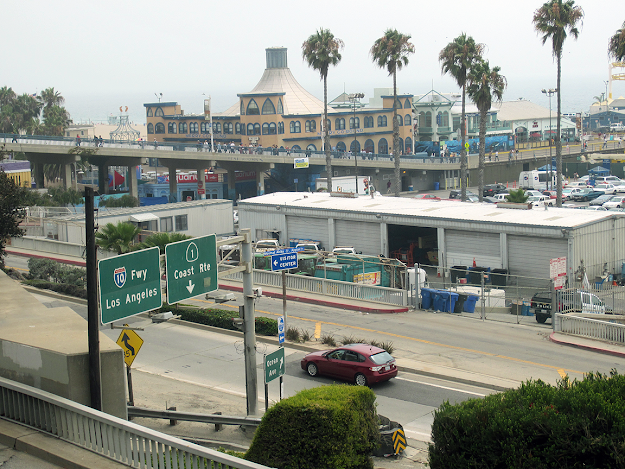 [A foggier day. The iconic Santa Monica Pier: the Merry-Go-Round featured as a brothel in the movie, The Sting. No, no, no, it isn't a brothel for real!] 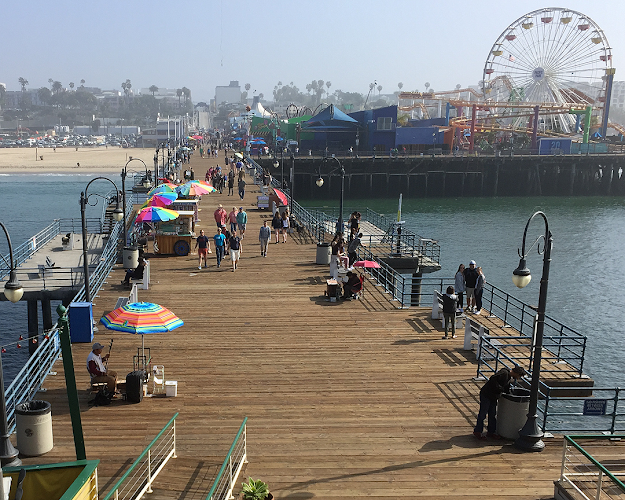 [View from the Santa Monica pier, looking East, the way Shing was headed. There is a sign on the pier that says it is the end of Route 66, which Shing mentions, but "The actual historical start (or end) of Route 66 in California is the intersection of Lincoln and Olympic," where, they note, is now a dentist's office.]
Shing and Bug camp their way along the old route through Arizona, New Mexico, a little bit of Texas (you know, Texas is big), Oklahoma, Kansas, Missouri, and finally to the Midwestern end in Illinois. But first, three hours in traffic trying to get out of Los Angeles.

They give an inventory of what they brought and left behind, friends reconnected with along the way, odd and interesting landmarks, and explains how sleeping in a Honda Fit is hard enough for a person five feet tall, which they are, let alone anyone taller. Shing lets the reader in on just the right amount of history and description to feel like the reader is along for the ride.

The book calls back to Steinbeck, to the Grapes of Wrath, one of two images Shing has had in their mind since their childhood in Malaysia; the other image is the glitter of Hollywood. Although they've lived in Los Angeles for ten years and been a U.S. citizen for four, they are curious: what does the rest of America look like?

The drawings are full of character and life, joy and chagrin. And anger, too, when they realize the racism inherent in the sign on a motel when it says, "American Owned."

At one point Shing notices, "I didn't think I was that much of a city girl until this drive. But I am acutely aware that I haven't had any sushi in weeks…."

Near the end, Shing writes, "Maybe I should stop pretending it's wanderlust when it is really just discontent." Shing ends up questioning the idea of home, and then accepting that as a person they aren't just one thing, and that home doesn't have to be one place. It is an upbeat book with some thoughtful messages. What stands out most to me are Shing's friendships and that Shing seems to have a big heart.

The epilogue notes that the drive was completed "in April 2016, six months before" the election, and they are glad they were able to do it alone at "a time when a brown girl could drive America fearlessly."