Bit by Bit, the Process of the Owls

I had drawn a pair of Great-horned Owls for a card, and the image haunted me, so I decided to make a linoleum print of the owls. First step was tracing the image, then transferring it to the block backwards. I cut paper to 4.5 inches by 6 inches, giving myself a few extra; I thought 28 pieces would be enough for any mistakes. I didn't need a lot of them. It would be a reduction print, which meant once it was on the press it would stay there until it was finished. And once I carved it away, I couldn't go back. The first carvings would delineate the white spaces.

It was 4 p.m. on a Wednesday, not the time to start a project, usually. I was tired. I hadn't printed anything new since February, 2020. Maybe just carve a little to start. Maybe just lock it up so it would be ready bright and early in the morning. Well, the first color would be yellow, just the eyes. I could probably print that without error. Yellow ink on the press, printed. Carved out the eyes. Maybe just do the gold around the facial disks. I could probably handle that. Done. Well, since I already had ink on the press I could add red to what I had and get a nice brown. Then black to get the final dark brown. It got easier as I went. And then it was finished.

I had not intended to complete the print by dinnertime. I surprised myself. I've made mistakes before by rushing a project through, thinking it would work out eventually. But sometimes it works better to give yourself permission to stop at any time. It was easier to handle, one step at a time. 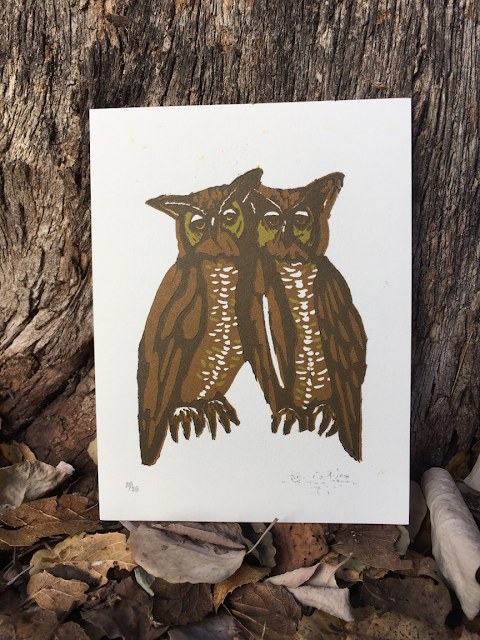