As I have been creating videos I have also been delving into sound and exploring Garage Band. For a few seconds using the "musical typing" was adequate, but then it was not. I can touch type, when that is called for, and I actually did have piano lessons as a kid, so while my fingers know QWERTY keys, for music they know piano keys. It was disconcerting (pun?) to remember that "semicolon" and "J" in this context were musical notes. And just when I would get absorbed with the musical typing I would hit the R by mistake, and it would begin recording. Gaaa. Not working.

My new MIDI keyboard is a sleek relief. No more hitting "record" by mistake, and I have much more to learn.

Music used to be the transition between writing and art for me. If I had been writing and was ready to draw, but didn't have any ideas, I would sit down at the piano and noodle around. I made up little songs and progressions. When I had those elementary school piano lessons I played by ear, didn't understand the value of theory, and later wanted to play popular music or jazz, to the disappointment and disapproval of my teacher. That was the end of lessons. When the Windham Hill label started releasing work by George Winston, I was delighted and found my groove. But in college, book art merged the art and writing for me, and somehow I could go back and forth more easily. Then, too, time was limited. I eventually let music-making go.

But, ahem, the new keyboard needed a cover. In the studio, I trimmed a piece of scrap batting to size, then spread the contents of the scrap jar over the tabletop. Since it was for a keyboard, I knew it had to have long rectangles, echoing the shape of the keys. This would be for me, and I would be looking at it every day on my desk, so I would have to love the finished piece. 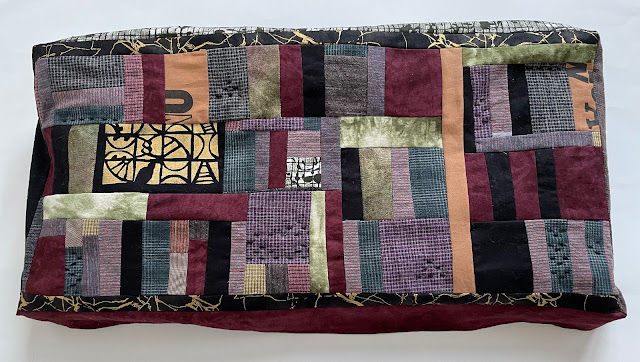 For my own pun-loving amusement, I improvised from the sashiko "fish scale" stitch for light quilting. 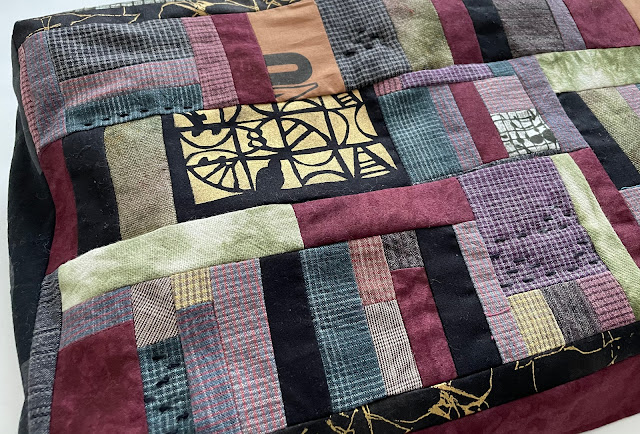 There are a few pieces of some brown trousers in there, most of which are in the quilt, Pipeline, but most of the checkered fabric is the lovely Japanese woven cotton leftover from the "hidden" series and others from early in 2020. I had dyed the burgundy color, mixing Brazil Nut with Maroon procion dye from Dharma Trading Co., and the I tie-dyed the green. The printed scraps with wood type were leftover from my quilt, Undersea Colonies. The larger black and gold piece was hand-stenciled and used in the quilt, Everything Is Temporary, the black and gold strips were a printed fabric from Japan via KimonoMomo I used to sew a mask. The little black and white square, reminiscent of music notes, which I also used as the back panel, was from Bay Quilts. The shops mentioned are local and independently owned, but also online. 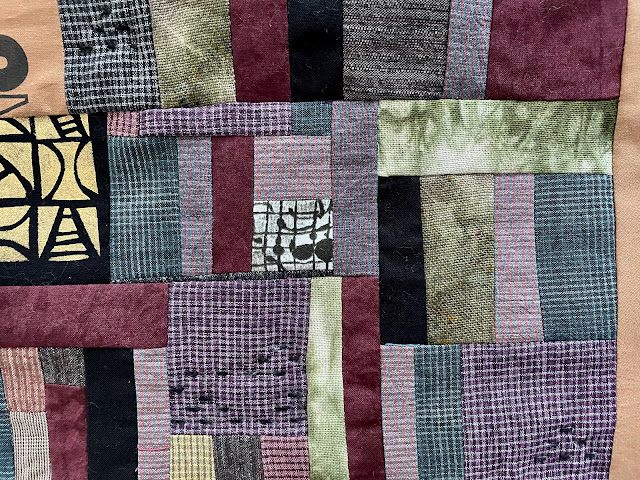