The premise was amusing: someone had taken photographs that looked like they might be from a Wes Anderson film, posted them online, gathered hundreds, if not thousands, of photos from around the world, and published a selection of them. What distinguishes the visuals in a Wes Anderson film? I imagined pastel-painted houses against a striking blue sky; signs in sharp focus and slanting light; pinks and greens; trams, maybe, large trim architecture, maybe, patterning, stripes. All in saturated color, possibly centered, with clean lines and matching elements like a magazine's home interior shots or a screenprinted poster. At the same time, the scene would be a little quirky, otherworldly, surreal. A pleasant joke, I thought. I'm a fan of Anderson's films, so I wanted to see what others saw. I requested that the library buy the book; I didn't think I needed it. (Book links are to Amazon.)

I was surprised to find I was wrong; Accidentally Wes Anderson by Wally Koval is much deeper than I expected. There is whimsy, yes, but it also includes history, culture, and anecdotes about a place or stories about a person who inhabited the space. A swimming pool at the Pittsburgh Athletic Association (16) sheds light on Fred Rogers' rigorous practices, for example.

And there are many bathing establishments. I had just finished reading Waterlog: A Swimmers Journey Through Britain by Roger Deakin, so swimming lingered in the back of my mind. He, too, had provided historical accounts and anecdotes about various swimming holes, rivers, clubs, and seas, and in Koval's book I recognized some of the places in the British Isles where Deakin bathed and that he wrote about.

The book is divided into loose geographical sections to give it a structure: United States and Canada; Latin America; Central and Western Europe; Southern and Eastern Europe; Middle East and Africa; South, Central, and Eastern Asia; Oceania; Antarctica. In Accidentally Wes Anderson, at one point, we find ourselves in Frutillar, Chile, a town by a lake made to resemble Germany with a vista of the Andes "like the Alps" (68). We learn the difference between an aerial tram and a funicular (the latter has two cars that counterbalance each other: when one goes up, the other goes down). We learn that the Taj Mahal was likely built after earlier architecture, Humayan's Tomb in New Delhi, India, built c. 1570 (267). We learn about a guard uniform in Copenhagen, Denmark, that sports a hat made from an entire bear (192-193). And on it goes. I like the photos of the tiny Ice Fishing Shacks in Ontario, Canada (28) and the ghost town, Kolmanskop, in Karas, Namibia (346-347) where the sands have blown through doorways, filling what were once rooms like a living hourglass.

And there are many other photos to admire. After many pages into it I began looking for the interesting stories as well as marveling at the scenery. What appeals to me is that this is a book of vistas and architecture, paint choices, and lifestyles. Each photo has room for the viewer to imagine, incongruous or not, that we are there. The book contains a treasure of fascinating facts, written in a slightly sly, entertaining, and humorous way. (Once again, though, the type is tiny! Designers, please!)

Anderson was solicited to write the short foreword, and he sounds astonished by the premise, wondering what it means to be "deliberately" him; he calls the book "an especially alluring travel guide," and hopes to visit these places, places he has never been before. Wally Koval, the author, has built an entire community online full of fans of Anderson, photography, and places around the world. Particularly now, it is great armchair travel. And maybe, some day, some of the places will be easily accessible destinations again. 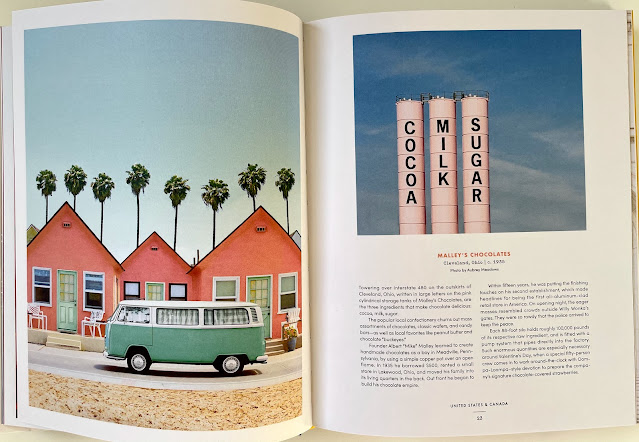