Susan Briscoe wrote the The Ultimate Sashiko Sourcebook: Patterns, Projects and Inspirations, a well-thumbed book that rarely makes it back on my bookshelf because it holds a valuable section on sashiko stitching patterns. She shows how to mark the grid and where to start for a wealth of stitches, each with a brief history or derivation. So, when I saw that she had a new book coming, and it was about boro, the functional cloths and clothes mended over time that are now appreciated as artworks, I requested the library buy it. (Please note that all the book links are to Amazon.)

Briscoe touches on boro garments in the book I have, which put me on alert, eager to see more. The Asian Art Museum in San Francisco included boro-inspired works in a 2019 exhibit, (Kimono Refashioned, catalogue: Kimono Refashioned: Japan's Impact on International Fashion), and last year the Japan Society in New York posted their spring 2020 show in depth online with video tours. From an outsider's standpoint, the frays and mends, the different colored indigos, the fading, all add to the interest of the pieces. The stitching and placement choices reveal care and craft, the handwork involved. People made these.

In The Book of Boro: Techniques and patterns inspired by traditional Japanese textiles, Briscoe is careful to explain that boro, which means rags, were created  out of necessity. The people who patched their clothes were extremely poor, and in later years were made to feel ashamed for having made and worn them. There are not huge numbers of these clothes still in existence. Many of the clothes wore out, some were buried or burned.

So it is a deeper, mixed feeling I have when viewing the works now. I appreciate them on multiple levels: art, craft, sociological, and a very personal and human one.

Briscoe also writes about the Amuse Museum, works collected by Chuzaburo Tanaka, in Tokyo which had a yearlong exhibition of boro (2018-2019). The website mentions an appreciation of "Yuyo-no-Bi," the Beauty of Practicality. The exhibition also features beautiful snowy pictures by Kyoichi Tsuzuki with people wearing boro clothing. I have my eye on his book, Boro - Rags And Tatters From The Far North Of Japan (2009).

For me, Briscoe's boro book is most valuable for the history and customs and pictures from her own collection, although each project is notable in that it shows an example from her collection that was the inspiration, and notes about which part and why: the creative process encapsulated. As a side note: the book itself looks beautiful, although the current graphic design disease of small or gray type and wide outer margins is visible, something inexplicable in a book meant to be studied and read. But book design is separate, and out of the author's hands once the manuscript is delivered. And the manuscript, the writing, and examples, are very good.

Around the book art world, artist Jody Alexander has also been inspired by boro and has self-published a slim book of lessons from workshops she taught: The Boro Aesthetic.

The proverbial saying, "the shoemaker's children always go barefoot," comes to mind when I look at the quilt on my bed, made probably fifteen years or so ago: it is wearing thin, has tears and holes, and I have patched it. I could make a new top or a new quilt, but I am starting to like the look. It is emerging as its own boro-inspired work. 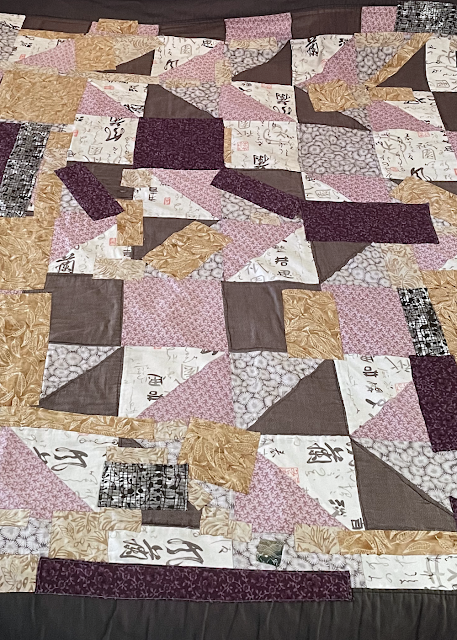 Mending is and has been in the air. A good word to add to the year.

Lovely Rita said…
Wow. This is an incredible post. I am so very grateful that you shared your thoughts and inspiration.

As a child of a single mother who worked her ass off just to keep us fed, we were raised that you never threw anything away until there was just nothing more that it could be used for. My mother grew up on a family farm during the Depression and they had nothing but the absolute necessities. She learned this "use it until it dies" from her own mother. I guess you could call it a family tradition. *sigh*

I have been a mender and hoarder of so many things over my lifetime. I, too, was raised to sew since it was simply a less expensive way to clothe our family. I have several of my mother's handmade quilts and learned to quilt from her as a way of decompressing from my stressful life when I was in my 30's. It worked like a charm.

I've taken some heat and suffered judgement for wearing mended clothing. But my philosophy these days, in a world where far too much ends up in our landfills thanks to our current materialistic mentality, is to take pride in keeping things longer because, even tho its mended, it still functions just as it was intended to. And I like the philosophy of the Japanese that take great pride in repairing everything, feeling that it increases the item's value because it shows that it has had a life, has been loved and well used.

Thank you for sharing the link to Briscoe's book. I've already got it on my wishlist and I look forward to getting it into my hands and giving it a good home.

Alisa said…
Rita,
I appreciate your for sharing your story; it gives even more depth to how we think about mending, waste, and pride. Thanks for writing!
-Alisa
February 18, 2021 at 3:09 PM