Nature Books Read and Unread by the Bed

Trees, plants, and animals are what we think of nature, rather than humans, but some humans have written some wonderful books about the outdoor world around us. I have a stack of them near my bed, some just finished, some dipped into, some waiting their turn. Five of the six were either recommended by one of you or given to me by a friend or friendly acquaintance. The remaining one is by the Ravenmaster at the Tower of London; one of his stories I heard on the radio, and you can access it online here at The Moth. Oddly enough, these books are getting me even more familiar with the British Isles and giving me a strong desire to visit someday. Thank you, all. (Book links are to Amazon.) 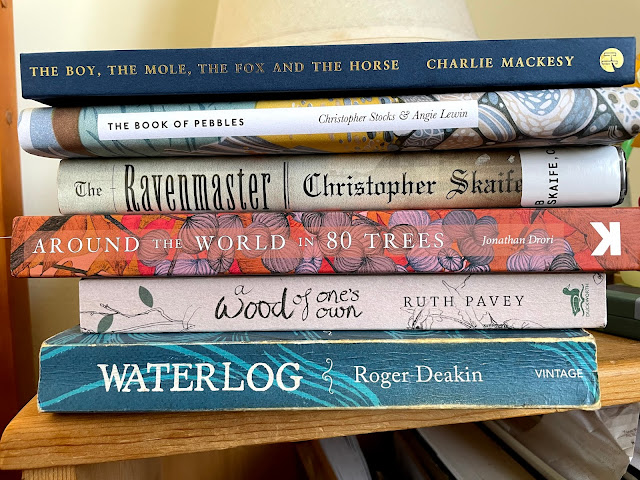 Waterlog: A Swimmers Journey Through Britain by Roger Deakin. Recommended by a reader. Deakin starts out describing his visceral reaction to swimming in his own moat at Walnut Tree Farm in Suffolk, England, and continues through his experiences of "wild swimming" in lakes, streams, seas, and more across the British Isles, inspired by John Cheever's story, "The Swimmer." He takes the reader up close and personal to what the water feels like, the people he meets, the history of each place, and the animals he encounters nose to nose. I felt completely enveloped in each of the worlds he creates, and left with a desire to swim, or at least visit many bodies of water. Not every adventure turns out well, and occasionally he treks long distances to be disappointed. But he always turns the situation into a learning experience and reflection on life. Although a book on swimming, much of his humor and word choice is dry, such as a moment at an aqueduct when "A gang of boys were busy clocking up hundreds of pounds in Environmental Agency fines" as they climbed the gates and jumped in or leapt upon various boats (202). I had read Wildwood: A Journey Through Trees and Notes From Walnut Tree Farm first, and loved both of those. 1999/2000.

A Wood of One's Own by  Ruth Pavey. Recommended by a reader. A London woman, with family roots in Somerset, decides to buy some property there. She ends up with an environment that she decides to work with rather than to try to tame, including planting trees, and letting the animals alone to continue to make their homes. It is not her intention to live there, but to visit frequently. The locals are initially somewhat suspicious of her, but she learns and becomes more accepted. Wonderful descriptions of the place and her various dilemmas as she herself grows into the property. As a writer, she imagines various scenarios, people who might have lived there, and she soars into flights of fancy and humor, even as she works hard in the physical space. Illustrated with her own sketches. 2019.

Around the World in 80 Trees by Jonathan Drori, illustrations by Lucille Clerc. Recommended by a reader. You can't help but notice the beautiful, if understated, design of this book; the pages are thick and creamy, the illustrations clear and colorful, the index pages helpfully pale blue. Each tree, as we travel with the British author and French illustrator around the world, gets two to four pages with description, history, anecdotes, and multiple views of the tree, bark, flowers, fruit, leaves or whatever the striking feature. I'm reading it slowly, enjoying the calm beauty of the book. One fascinating fact: In 2005 date pits, carbon dating to 2000 years ago, were found in Israel and planted; twelve years later one seedling had grown to be ten feet tall (72). 2018/2020.

The Ravenmaster: My Life with the Ravens at the Tower of London by Christopher Skaife. After listening to him tell his story about the ravens and discovering he had written a book, and due to my continued interest in birds, it was obvious I would have to read his memoir. Skaife was a wild youth who decided to enlist in the British military when he was sixteen. His mother figured it would be better than jail, so she let him go. To be a Yeoman Warder one has to have served honorably, which he did as a specialist in a machine gun unit and drum corps. His description of his current job tending the ravens in the Tower intermingle with the backstory of own life, and he makes parallels between them. The reader is treated to many stories of particular birds, including their personalities and how they interact with him, and the historical lessons with which he regales the flocks of tourists, all with a good dose of humor. One raven, for example, has learned how to steal a sandwich from an unsuspecting visitor by hiding under a bench and tugging the sandwich through the slats. This is real, so that although there are good times, there are sad times too. It contains several pages of recommended reading at the end, including Charles Dickens' Barnaby Rudge, which features a raven as a character, and Mind of the Raven: Investigations and Adventures with Wolf-Birds by the expert Bernd Heinrich, both of which are going on my next reading list. 2018.

Book Of Pebbles by Christopher Stocks and Angie Lewin. A friend brought this back from a trip, and it had even more resonance after reading Deakin's book, which takes the reader to many of the same places. The artist collects stones and creates multicolored prints and watercolors with the pebbles as her main subject. As it says on page 77: "This book is mainly about the beauty of pebbles, not their geology." Even so, it mentions various types of rock and various geographic locations through the British Isles where you might find them. I am intrigued by the description of Chesil Beach in Dorset where "around 180 billion pebbles, [are] graded by the action of the tides from pea gravel at its western end to large cobbles where it meets the Isle of Portland" (89). I believe it is mentioned in Deakin's book as well. 2019.

The Boy, the Mole, the Fox and the Horse by Charlie Mackesy. This was a surprise gift from a bird-person acquaintance. I was touched to receive it, and the book itself, even after only reading the intro, touched me as well. It is hand lettered with ink and brush, and seamlessly includes illustrations with the same ink and brush, tinted with watercolor. In the intro, as a letter to the reader, he writes, "The truth is I need pictures, they are like islands, places to get to in a sea of words." The emotional sensation reminds me of The Little Prince and The Lost Words (blog post about the latter here). A boy meets each of these animals and together they walk and ponder their fears, their desires, friendship, and home. When I finished tears were streaming down my cheeks, but not because it was sad. A wistfulness, perhaps? The Boy, the Mole, the Fox and the Horse is a quick read, but one to take slowly and savor (or savour). 2019