Now It Is Needlepoint: One Continuous Loop

I read a review of an exhibit in the New York Times called, "Threads," that snagged my attention, and prompted me to look up the gallery here. A textile show, it had a variety of traditional crafts as well as textile assemblages and works made with non-traditional materials. The rug with triangles that the review mentions is very nice, but it was the colorful, abstract needlepoints by Steve Reinke that intrigued and inspired me. In his artist statement, posted within the online gallery text, Reinke writes that these are improvisational works, doodles, and he has many of them; when he begins he doesn't know where they will lead. Perhaps it was that improvisational quality combined with the preciseness of the craft that made me jump out of my chair. His needlepoints are the liveliest I have ever seen.

Seeing Reinke's work made me want to do needlepoint again.  I had something in mind. 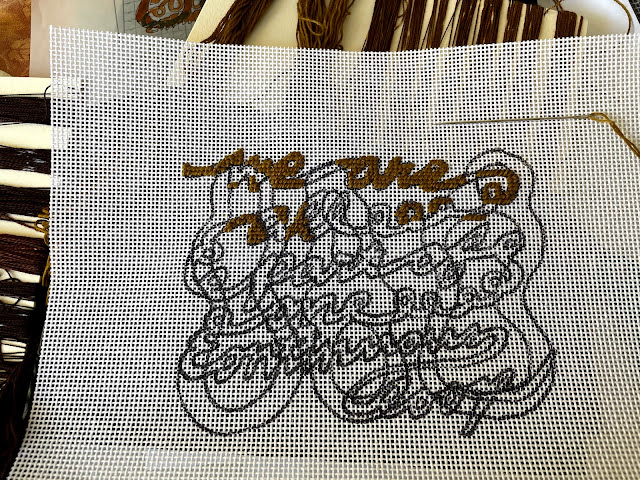 As I am a child of the 1970s, all crafts are my friends. When I was ten or eleven, I saw a needlepoint kit at a Temple bazaar and asked for it. The design, appealing to what became my lifelong love of typography, featured the Hebrew word, L'chaim (to life), with an eternal lamp hanging from the letters. 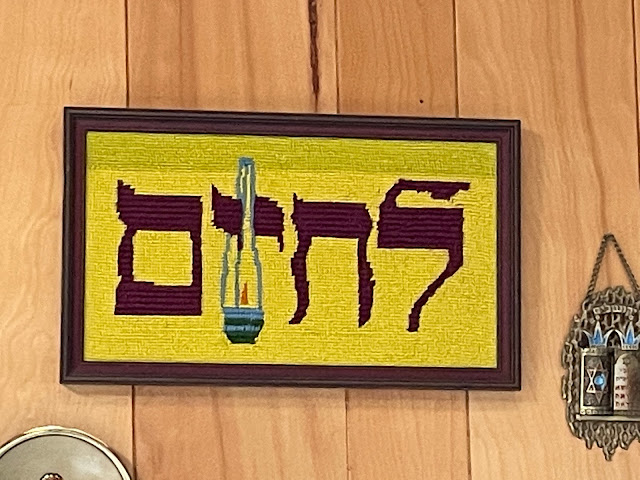 My memory, although quite vague, needles me that I was asked if I was sure, and was I going to actually do it since I had never done needlepoint before. I sat beside my grandmother, who proceeded to teach me. I felt impatient. She was a top-notch crocheter, but had she ever done needlepoint before? Perhaps she said we would learn together. In any case, I finally got hold of it. And we ran out of thread. So there is a segment of the background at the top that does not match. But still, my grandma taught me. That, I remember. I also remember adding the blue stripe on the lamp, because: me. Funny how the partial memory was stitched into the piece.

From there, at twelve, I designed several needlepoints to make and give as gifts to my Bat Mitzvah teachers, rabbis and cantors. The needlepoints paralleled the initial store-bought L'chaim as they were also words: Shalom (peace) in a dove shape; Ahava (love) in a heart shape; and Eytz Chaim (tree of life) in a Torah shape. I still have the old pictures of two of them.

It seemed natural enough to go back to it. Now I read that there are different size canvases: 10, 12, 14, 18, possibly others: holes per inch. I found a needlepoint I had started in 1997 and counted: it is a 10, which I gather is standard. In order to do more detailed work I would need the smaller holes. I found information at a website that also had an Etsy store, Needlepaint or NeedlePainters, and ordered a fat quarter (in this case, 18.5" x 26" or 46.5 cm x 48.5 cm) of each of 14 and 18. They suggest the 18 is good for belts, among other things. I will not be making belts, but it will be good for some smaller or highly detailed pieces and thinner thread.

The first design I stitched, cut from the 14, is based on this linoleum print I did recently as an art-by-mail card in honor of San Francisco's Ruth Asawa Day, February 12. The print is available at nevermindtheart, and can be personalized. 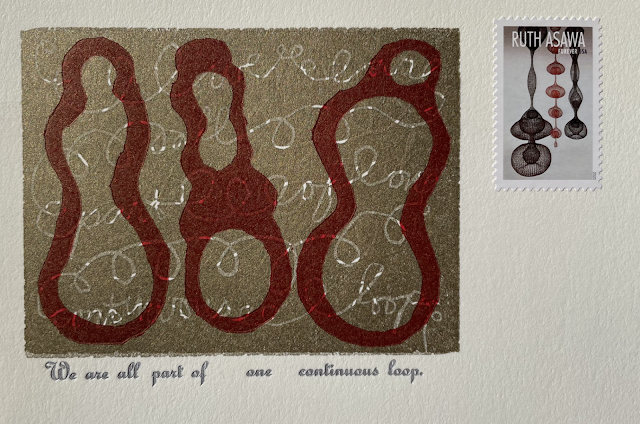 Always interesting to see how an image translates from one medium to another. It generally takes on its own life. It must, if only because of each medium's constraints. 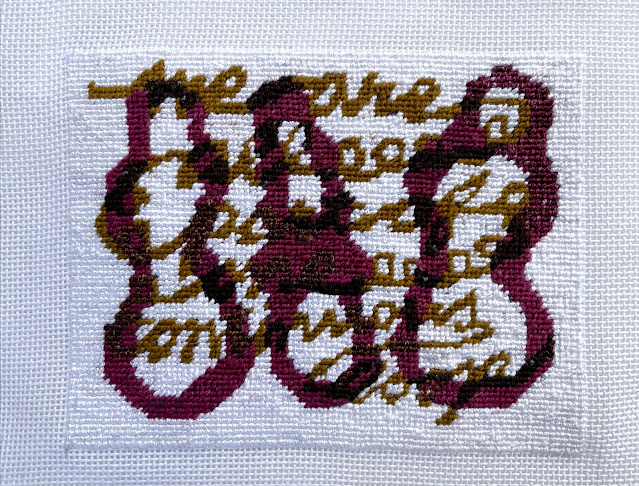 And of course I had to dye my own thread.

Size 5 Perle cotton, doubled, works perfectly with the 14, and it takes the Procion dyes from Dharma beautifully. It was a good excuse to order more colors: Amber Waves (yellow/tan); Rust Brown (more brown than rust orange); Lime Squeeze (bright spring green, as you might imagine); Razzle Dazzle (a magenta/purple); and Periwinkle, which came out more purple the first time around, more blue later. There was a good deal online for a box of twelve skeins of the DMC perle cotton. I had dyed some of the heavier sashiko cotton previously, but had a few more to try. The red below isn't really that bright, the rest are pretty close. 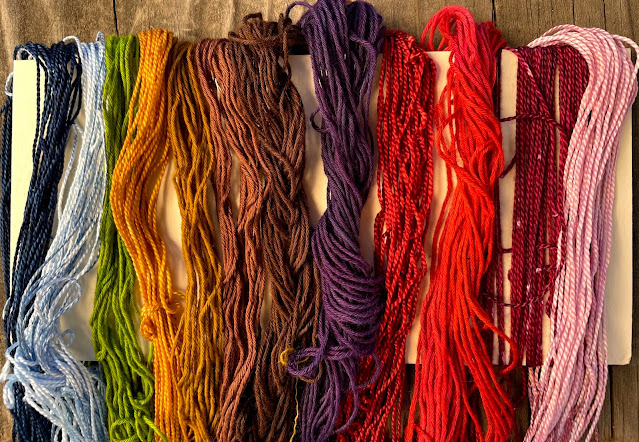 I will see what demands to be made next. I have much I want to push in this medium: layering shapes and forms, weights and textures of thread, ways of mounting the finished piece, color palettes, and more. And there may be a use for those threads from the thread jar after all…

Most of the needlepoint work for me is front-loaded: design, transferring the design, choosing the colors, dyeing the thread. After that it becomes a good project for the evenings when I just can't think anymore. But the idea of doing an improvisational piece is verrrrrry tempting.

We are all part of one continuous loop. And so is our process.

Velma Bolyard said…
lovely, returning to something taught to you when you were little. important to see us all as part of that loop, one little twist in the spinning threads. I've never been tempted by needlepoint, but I like the idea of it being improvisational. yours and sarah swett's are the only needlepoint that has had any resonance for me. having written that I'm sure to find some amazing work! maybe even be tempted! (and I love my card)
March 16, 2021 at 9:17 AM

Lynn in Tucson said…
I love that there is a Ruth Asawa day and I love this post. I sometimes feel like too much of a magpie, chasing the next shiny thing, but I think some of us are just like that. One medium is not enough to express all that we need to explore or say.

I am rekindling my affair with hand-bound books, however, and that is one of the things I love about them. They can hold so much: dyeing, printmaking, calligraphy, collage....
March 16, 2021 at 12:56 PM

Alisa said…
Lynn, I'm with you, and I like that each medium can show a different aspect of expression. It all goes into the toolkit. Which is an advantage when you get a particular idea and can consider which medium might be best for a project, or which grabs you first. And right now, when we can't really get out to see an exhibition in person, it s great time to explore and learn. Thanks for writing.
March 16, 2021 at 1:45 PM

Alisa said…
Velma,
I'm so glad you like the card, and thanks for your comment. I haven't made anything this abstract in a long time. It was not a huge investment, and doesn't take up much space, so we shall see what happens! And I hope you check out Reinke's work at the link above. I'd be curious what you think of it.
March 16, 2021 at 1:48 PM