I’ve just finished a book and have been thinking about friendship, about what it means to be a friend, a good friend. I suspect these ideas have been gleaned from the reading. They may even apply to other kinds of relationships as well. Some thoughts:

1. A good listener
2. Supportive and encouraging for creative and positive endeavors, as well as during hard times
3. Ability to be oneself and accept the other person as they are
4. Have some important interests and/or values in common
5. A sense of humor is helpful
6. Commitment to the friendship

These also occurred to me. I'm sure there are others.

7. Respects the other person and their boundaries and limitations
8. Would never intentionally hurt the other
9. Trustworthy

I have a friend now who was an acquaintance twenty-five years ago; we used to wait together for our young children who attended the same after-school lesson. At the time, she asked me where I lived, and I brightened, telling her how much I loved my neighborhood. After the session ended we parted ways; our children had not become friends, and we were busy. Some time later, walking down my street, a woman called to me and told me with a smile that it was my fault her family had moved there. I welcomed her, but again, that was that.

In 2019, we ran into each other in a nearby supermarket and began talking in the tea aisle. Our children were grown, but we and they had some interests in common. We blocked the aisle, consistently apologizing to other shoppers, until we decided to continue the conversation elsewhere on another day. And then, unlike other friendships I’ve had, we agreed to a quarterly friendship, just meeting once every three months, and basically not having the time or needing to be in touch in between. We could, but neither of us would count on it.

We only met three times before we had to cancel our May 2020 date, but we ran into each other again while out walking in March 2020, and due to the Pandemic, finally resumed a conversation more than a year later, May 2021. She recommended a book I had not heard of, a memoir, and I requested it from the library. It was Becoming Duchess Goldblatt by Anonymous, which, among other things, is a book about friendship. My quarterly friend and I seem to know each other well enough. I wrote her it was “Deep, thoughtful, poignant, funny, heartbreaking and joyful at the same time.” She was pleased I enjoyed the book. It can be disappointing to recommend a book and find out the other person doesn't care for it, so it was also a relief to me that I did. 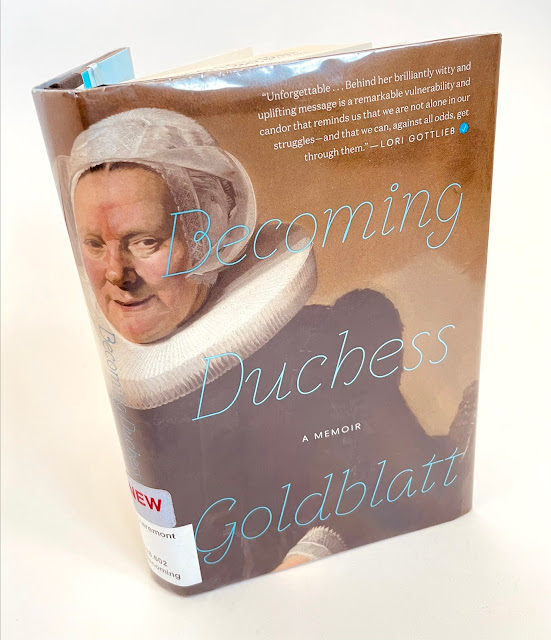 The book is well-written, feels honest, and reels you in, revealing something new about the author's life when you are not expecting it. It's as much a philosophical look at being alive and human interactions as it is about mental health and being true to one's self, with a love of language and wit along the way. I'm sure there are plenty of reviews, but maybe don't read them.

I like the questions it poses, and the kindness and generosity of spirit one can have and spread even amidst dark times. And the power of fiction.

I don’t want to tell you too much about the book since I went in cold and came out warm, happy to discover it as I went. All I was told was that a lonely woman who was not in a good place created a fictional character on social media that changed hers and other people’s lives. The social media account is still running. Maybe check it out after you read the book. Or maybe you already have.

Cally said…
Thank you so much for the book recommendation - I bought it on Kindle last night and am loving it so much that I am seriously considering joining Twitter just so I can follow the Duchess!
May 28, 2021 at 3:48 PM