When I hear of an interesting book I write it down, or I go ahead and place a hold at the library. This can mean I go a few weeks without a library book to read, or weeks where I have several to read at once, which can be stressful (everyone should have this problem). Four books overlapped recently. 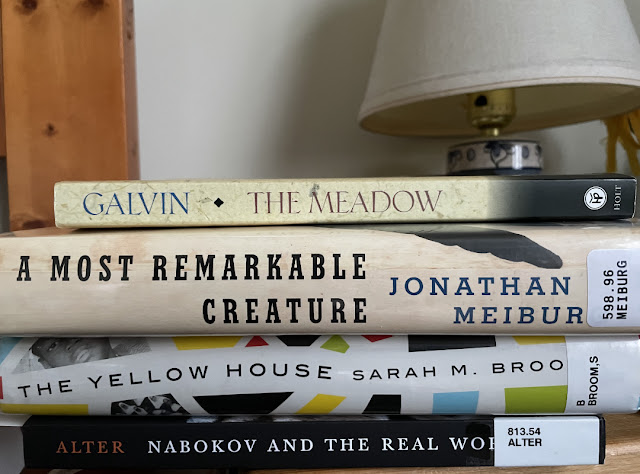 The Meadow by James Galvin, 1992. While I was waiting for some books to appear, I reread this one for the third time, and then wanted to finish it again anyway, even when I had library books urging me on. Galvin is a poet who, in The Meadow, writes a series of interlocking short pieces, each usually from one to two pages. The meadow in Wyoming, near the Colorado border, is itself the main character, both a beautiful and brutal presence. On this land several generations have lived and do live on in the fictional stories, which are naturally accurate. Self-sufficiency, pride, making everything by hand, snow, coyotes, snow, illness, alcoholism, snow, death, families, fence mending, rivers, and stuck tourists are parts played in the scenes. Galvin writes poetically and vividly, but the stories are told sparely, without much judgment, and they sink softly into the consciousness of the reader.

Nabokov and the Real World: Between Appreciation and Defense by Robert Alter, 2021. Alter also writes poetically. He translated a version of the Hebrew Bible. Let me say that again. He translated a version of the Hebrew Bible that is marvelous. He loves language, and I did not know it, but he is deeply familiar with Nabokov. In grad school I took a course on Hitchcock and Nabokov (they were both born the same year and were both immigrants), so I am familiar with many Nabokov stories. This book is a thoughtful look at both Nabokov's approach to life and to writing and the reactions of people to his works. I am only 32 pages in, so far, but enjoy the questions raised, and the writing style, of course. I have heard Alter speak (he's a local), and have always appreciated what he says.

A Most Remarkable Creature: The Hidden Life and Epic Journey of the World's Smartest Birds of Prey by Jonathan Meiburg, 2021. What bird is this? The Caracara of South America. From the history of birds dating to when they were dinosaurs, the asteroid that split them geographically, the behavior of related birds, a journey down the Rewa river, the history of one of his guides who first studied bugs, now studies birds, and more; this book goes wide and deep at the same time. The journey to look for one particular species of caracara (while watching out for piranhas, jaguars, and anacondas) is probably the most engaging story, but the natural history is extremely interesting as well as the life histories of Darwin and writer and naturalist William Henry Hudson, which are woven in. Meiburg brings it all vividly to life: another wonderful writer. The Caracaras remind me of the Keas I read about (and wrote about briefly) in The Bird Way by Jennifer Ackerman, 2020, something between a parrot and a corvid; gregarious but curious, and very, very smart. A book to read more than once, I think, to fully absorb it. You can feel his enthusiasm and perceive that he has much more to say.

The Yellow House: A Memoir (2019 National Book Award Winner) by Sarah M. Broom, 2019. A memoir with a place at the center. I've only just begun the book, but already I am caught by the language, style, and feel of the writing, and by the fact that Broom's family home and neighborhood, New Orleans East, not mentioned in tour books, was destroyed in Hurricane Katrina. She has her memories, and she populates the streets and roads with her ancestors, family, and friends, letting the reader know what had and has meaning, when, and where. Each section is introduced and illuminated with thought-provoking quotes about journeys, mapping, and place.

Dixie Walker said…
Thank you so much for these recommendations. I recently read a novel by James Galvin, called Fencing the Sky, which I highly recommend. I didn't want it to end. I'll definitely read The Meadow. I'm curious to read his poetry, as well.
July 5, 2021 at 10:55 AM