While I am currently working on two larger projects, I am also messing around with some new textile techniques, inspired by two artists who work in completely different ways. The first is Paula Kovarik, whose book, At Play in the Garden of Stitch I first checked out of the public library (after requesting they buy it), and purchased (through Alibris) after deciding I wanted it in my personal library. The second is Dorothy Caldwell, whose quilt was shown in the pages of SAQA Quarterly and caught my attention for its marks and color.

I think in some ways the combination of the two artists' works brackets my interests. Kovarik was a graphic designer for thirty years and uses her sewing machine as a drawing machine, very tight and whimsical: she has superb control over that free-motion foot! She seems interested in language and lines. I was struck by how Caldwell's home page shows her hands holding cloth in what looks like mud. An artist whose interest seems to be the landscape, mapscapes, marks, and our grids on the ground, she's traveled the world to study stitching and dyeing, and her pieces employ waxed resist, discharge (like deColourant), and stitching in an abstract and viscerally natural and textured way, with periodic bright color accents. Both artists make stimulating and exquisite work, and interestingly enough, employ a lot of black cotton.

I began understanding the differences in all my sewing machine's feet. Particularly how to work with the free-motion foot. About time, right? I had a blast and made what I'm calling (affectionately) my "thread messes." I sewed little drawing and writing "sandwiches," as Kovarik calls them, and flipped them, joined them, affixed them to backing material,  and bound them. The binding, as usual, took the longest. They are small. The messiest one (square on the right) I feel most attached to and am keeping it as a tea coaster by my laptop. The larger ones are placemat sized. 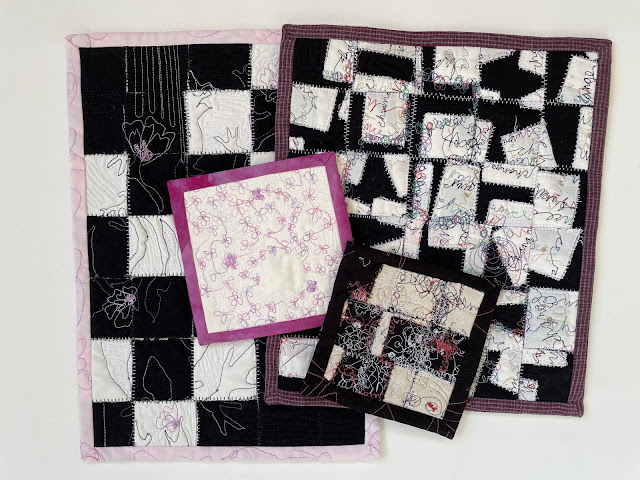 After following some of the exercises in Kovarik's book, I also realized that while it was fun, I already have my own style and voice, and it was a stretch to work this way. BUT it was fantastic to find a new way of working, accessible if or when I need to express something in that manner. And now I feel more comfortable with the free-motion foot.

A week of intense concentration was followed by exhaustion and the need to follow my own path again. That's when the new larger projects began. But then Caldwell's quilt image of A Lake, A Bowl showed up (it's actually the third panel of a triptych shown here), and I had to see what her work was about. It energized me in a different way. I loved the marks around lake and bowl; they remind me of linocuts and other printmaking marks, and I didn't understand how she made them until I watched a short (4 min.) little video of her. She uses all kinds of textile printing blocks and a tool with wax. There is a second video that is of some artifacts in an installation, "Silent Ice / Deep Patience," she created here, that is also inspiring, I think. Note her textural books in the latter video.

I thought about taking out my deColourant and playing with line, but my early thoughts were that the lines had been sewn, not painted or drawn. Mashup time. Made a Kovarik sandwich with black Kona cotton and batting and pulled out some of the brightly colored velvet I had dyed. Here was an orange I did not think would be in any quilt, and would make a nice tangerine fruit. And a few scraps of moss green to appliqué. My free-motion foot and I had a conversation. More thread mess! Just keep moving, I always say. I am liking this direction and am fine with wherever it ends up.

The binding is made from the moss green ice dye experiments from October, 2019 (post is here.) 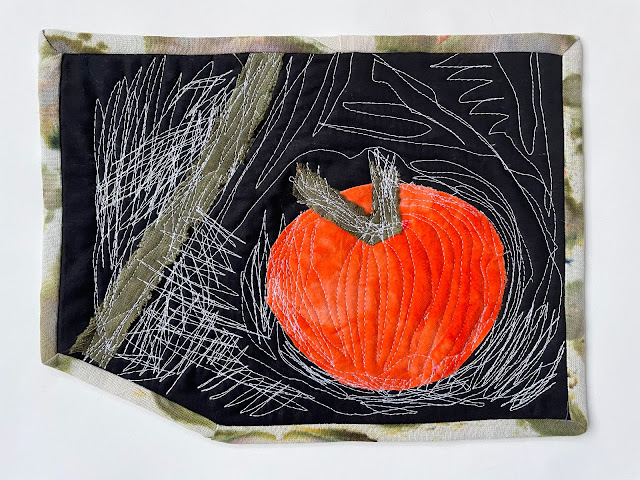 Okay, and the back. 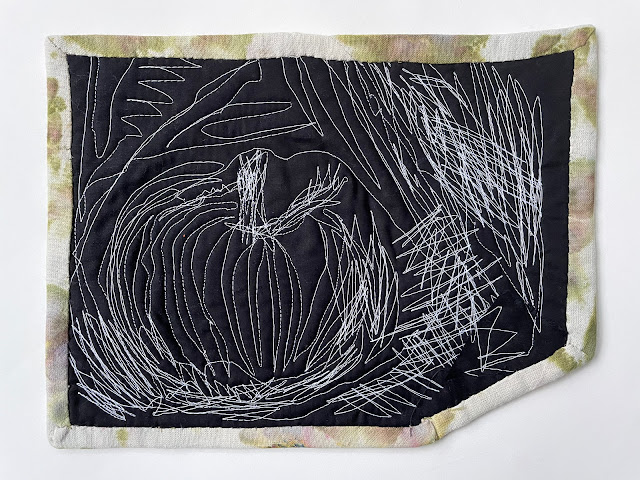 More thinking and experimenting is definitely called for. I will see what images call to me.

I wrote Kovarik a note, thanking her for her inspiration. She wrote back with a phrase she uses over and over in the book: "remember, it's process, not product." True fun that way, but also nice to have a success in a product now and then too.

Addendum 2.4.22: After watching a virtual lecture, it became clear in context that what Kovarik means by "product" is something for sale. So it makes sense to remind oneself to make work that one likes, where one enjoys the process, without thinking ahead to how, where, when to sell it. Still, that is only going to work for those who have time and resources to do so.

A Little of the Process

These were made primarily by stitching a larger rectangle, then cutting it up and stitching it to a base and cutting it up again. Here are the backs of the two placemat sized ones. On the left, note the black sandwiched under the white gives a shadow effect. Many possibilities with that idea. 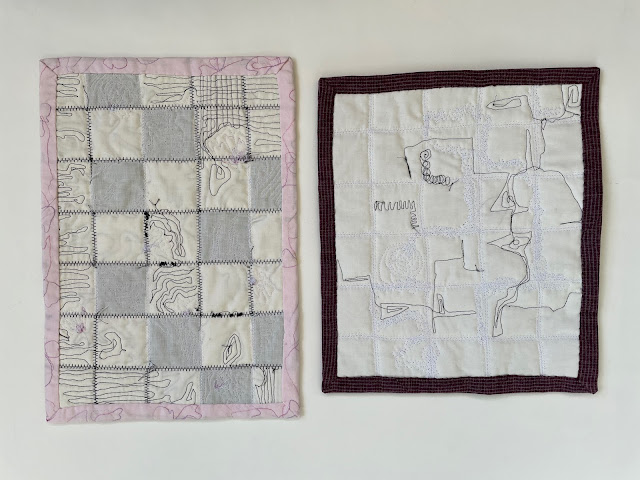 And a little of the process for the one I call "Magnolia" on the left with the pink binding: 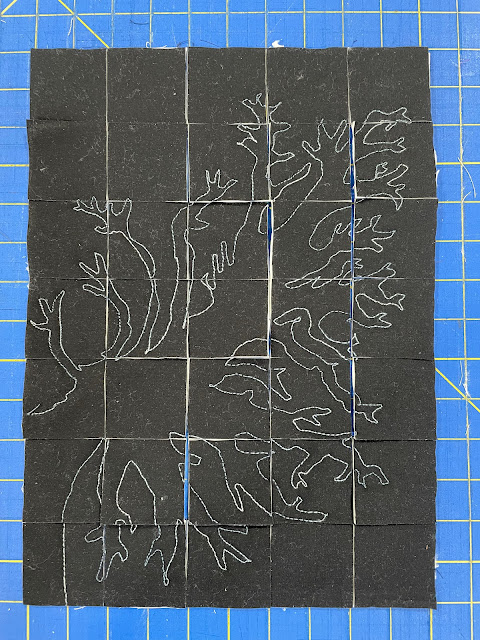 After stitching I turned some of the pieces over. 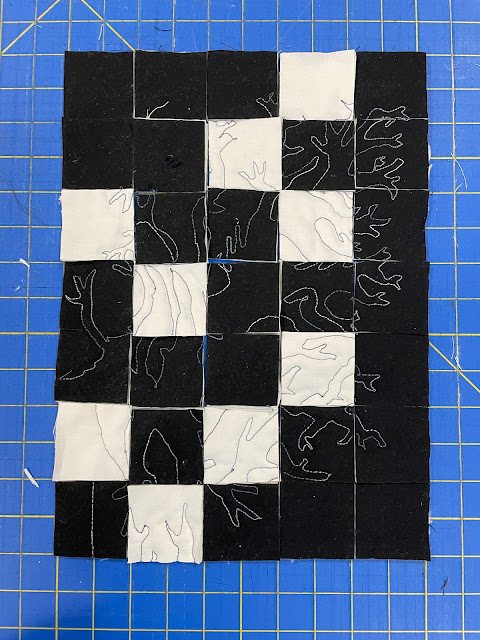 And after sewing it all together, I added the magnolia blossoms in pink.
And the one on the right, I called "Chance, Change," with the plaid-looking binding: 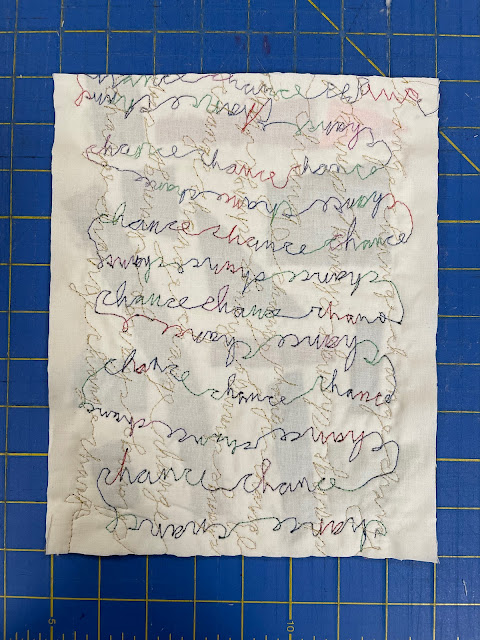 It also has some of those shadow strips underneath.
I cut it into squares and sewed the squares to a black background. 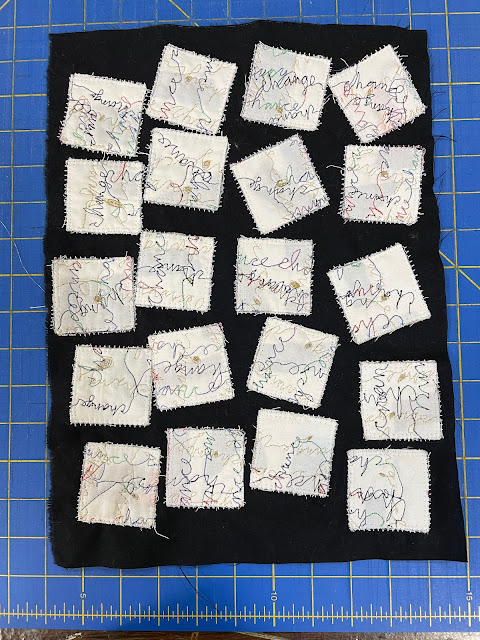 It got cut up again and moved around, before I stitched it all together. 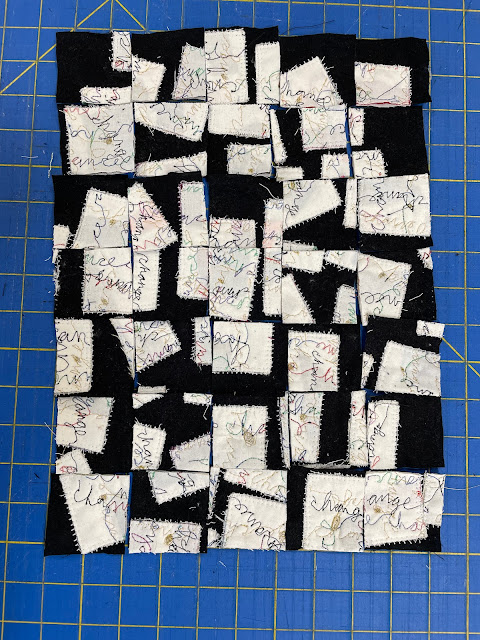 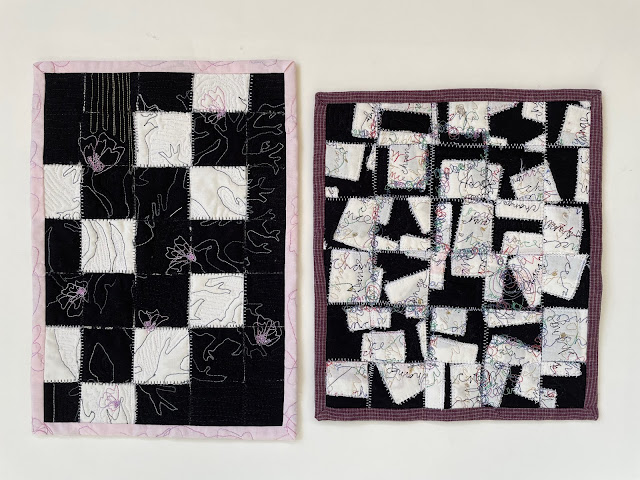