Art Quilt Assignment for Self: After Anni

Long ago and and in a galaxy far away, when I was an undergraduate in an art class, we had an assignment to choose a famous artist and copy one of their works as accurately as possible. I was interested in Georgia O'Keeffe at the time and had bought an oversized book of her paintings. What was I thinking? I tried, then discarded a first attempt. I searched for one I perceived would be easier and chose a different painting. And I was somehow able to copy it, Jack-in-the-Pulpit V, 1930, an oil on canvas, with acrylic paints on paper. It was hard. But I learned about seeing, and I learned about blending. And I gained an even greater appreciation, a greater admiration, for O'Keeffe. It makes sense now, when I read about what we might consider old school: students copying from the masters before they make their own work. By delving into the work, rather than someone instructing do this or that, you can engage your whole body, take it in, make the process part of you. You see what problems the artist might have faced and then have to solve them yourself.

I think this is part of the premise of the art crit book, Authority and Freedom by Jed Perl. That the artist must be grounded in what came before, the tools and techniques, methods and materials, artists and works, before they can be free to make it their own art, make something fresh. I am not sure I wholly subscribe to that idea, and particularly not for very young children, but it is worthy of examination. Perl quotes different artists as examples, one of whom is Anni Albers and her book, On Weaving.

The library was able to furnish On Weaving for me, and I read a little, but mostly studied the images. Many intrigued me. Perhaps because it was quiltlike, one caught my attention: Plate 112, Wall Hanging, double weave, 1927/1964. I was waiting for more fabric for the binding for Rainbow Roll, so I idly started cutting up squares and arranging them with Albers's piece in mind. Her work is weaving, of course, and I was trying to translate it into pieced cloth, using the quilt form's freedoms and constraints. Just playing around. A study, perhaps. An assignment for myself. 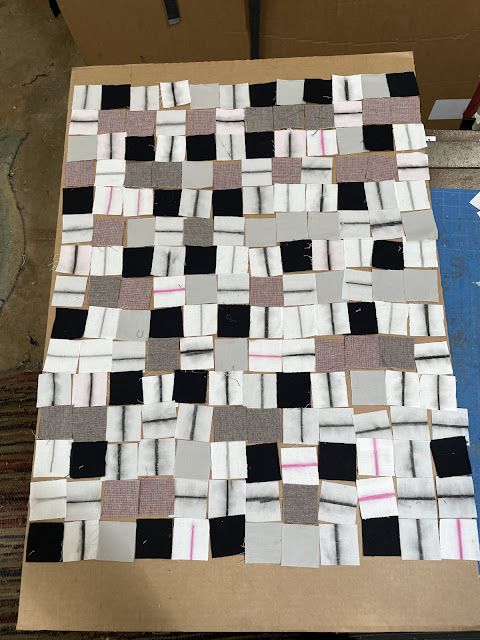 At the same time, I was interested in trying out the fabric crayons I had recently purchased. A booklet said you could smudge them, which appealed to me. I made some black lines and smudged them, which I liked. I made some with pinkish lines, which I did not like so much, and I realize now they remind me of smudged lipstick! But I used a few of those anyway. 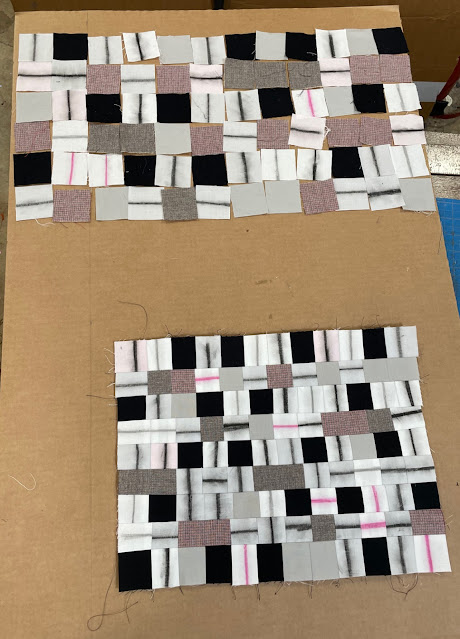 The quilt took on its own life and desires, although I firmly insisted that the black squares that Albers used remained the same number and in the same position as she had placed them. It was hard to figure out her logic and how she had woven them. Was there a pattern? I finally found it. But nothing in the rest of my quilt had a pattern. Her black squares anchored it. 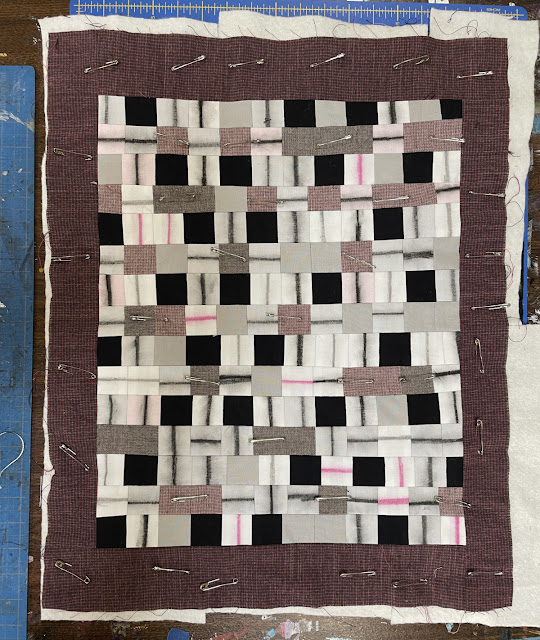 Again, this was not a weaving but a quilt, so how would I quilt it? I started with a few running stitch lines. The quilt was so anchored it was sinking. Something was off. I bound it and stared at it again. How to both wake it up and add another organizing principle? 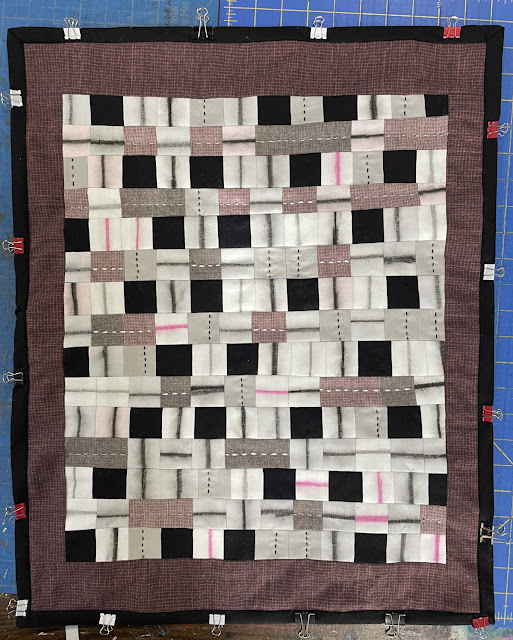 I like to go back and forth between random and regular, loose and tight. I always feel something should look like it took a long time to do, something maybe even virtuosic. I settled on "Linked Seven Treasures" sashiko stitch because it would both add organization and add curves and circles; I chose a variegated color of cotton thread to add further movement. 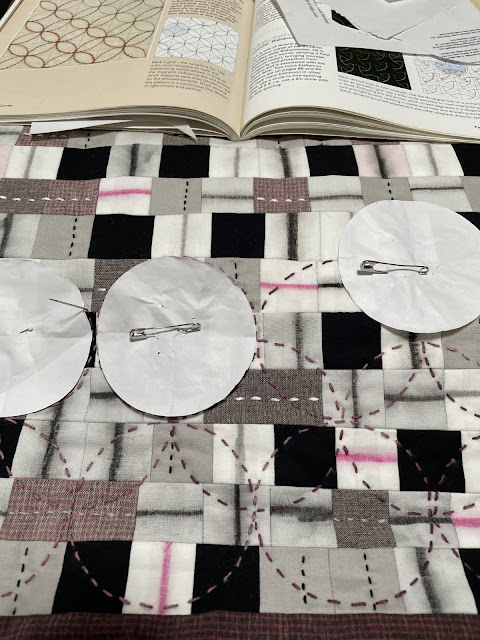 Too much? Maybe. Based on this quote, I suspect Albers I might think so: "Intricacy and complexity are not, to my mind, high developments. Simplicity, rather, which is condensation, is the aim and the goal for which we should be heading" (p. 29). She speaks of "clarified vision," which I am not sure I found. But I think that complexity for its own sake may be what she means. And I would add the word elegance to her phrase, which is also a worthy goal.

By making the piece, I felt I understood Anni Albers's creative process a bit better, certainly taking the time to look closely at one work was illuminating. And gained a greater appreciation and admiration for the artist. 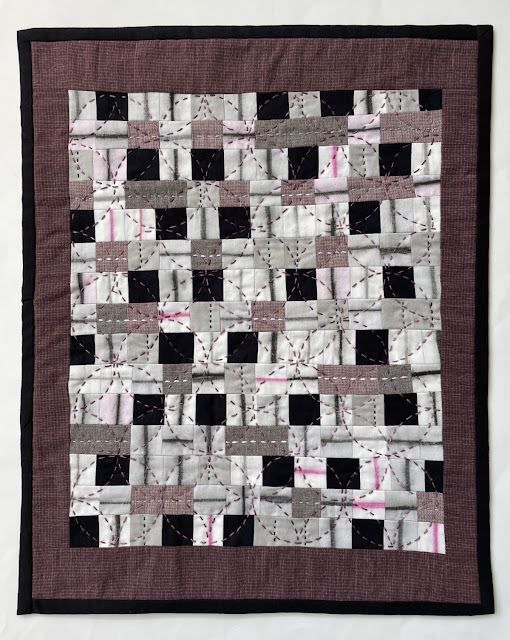 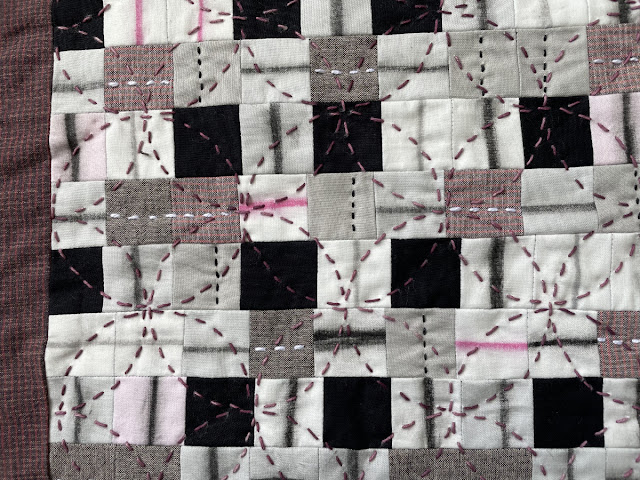 Liz A said…
I very much enjoy doing research in conjunction with creating a piece ... likewise, reading about someone else's research ... thank you!

Several years ago Judy Martin referenced a reproduction of Anni Albers' Notebook 1970-1980 ... I purchased a copy at the time and recently noticed it sitting quietly on my shelf ... perhaps it's time to revisit it
April 13, 2022 at 5:47 AM

Alisa said…
Liz A, Neat! And I like those seemingly coincidental moments that quietly draw us back to something we were once interested in.
April 13, 2022 at 7:38 AM