Over the years, I've spent a fair amount of time at the Richmond Art Center. The exhibits are nearly always refreshing and inspiring, from the community artwork in the hall to the larger shows in the main room. Art and craft and social responsibility commingle here, and the Center holds classes as well.

Currently, they are hosting a show of primarily large linoleum prints by Emmy Lou Packard (1914-1998), excellent artist in her own right, but probably known, if at all, as an assistant to Diego Rivera. She took some iconic portraits of Diego and Frida, as well as one of Frida I have seen many times without knowing who took it. Why wasn't she known? Perhaps because she was a woman and a Communist and a printmaker, all three not held in wide esteem at the time.

The curators are Robbin Henderson, formerly Executive Director at the Berkeley Art Center, and Rick Tejada-Flores, documentary film maker, a friend of Henderson's and an assistant to Emmy Lou Packard. At the gallery I overheard that Tejada-Flores is still in touch with Packard's son, and most of the prints in the show were loaned by the son, as well as others.

The prints have a very 1960s graphic look to them, and they are exquisite and exquisitely carved and printed. I picked out a few to talk about. Hard to photo with the lighting and glass, but here's a try anyway. 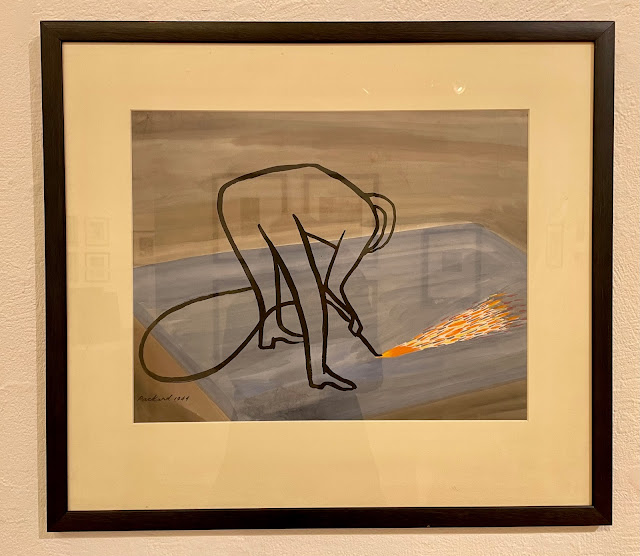 Very simple, yet captures the movement and feeling of being bent over at work. The drab blue and gray colors set off the hot orange and yellow sparks. The shapes add dimension to what would otherwise be a flat piece.
Produce Market, color linocut, 1950s. 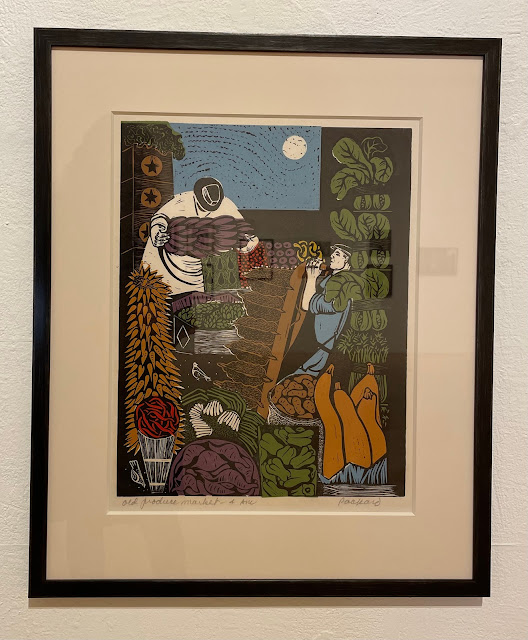 Notice the patterning, especially how the marks across the sky create depth. Beautiful use of color; you can almost smell the produce, I think. Again, workers busy, not posing but working.
Surf Fishing, linocut, 1950s. 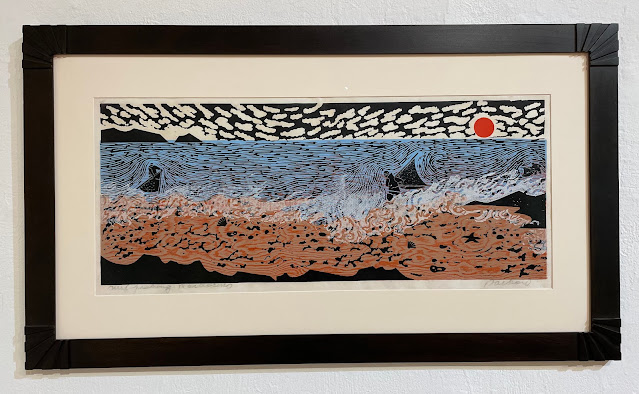 The marks and patterning create the feel of the waves. The overprinted layer of white for the whitecaps again suggests depth. I'm intrigued by those cloud marks and by the wormlike carving in the waves. The warm red sun balances it out, adds interest, and completes the picture.
Packard and her (second) artist-husband Byron Randall had a gallery in Mendocino; this is a poster for it from 1960. She has collaged various elements from her prints that really show her style. The fish and the bottom anemone are from the next print, one of my favorites. 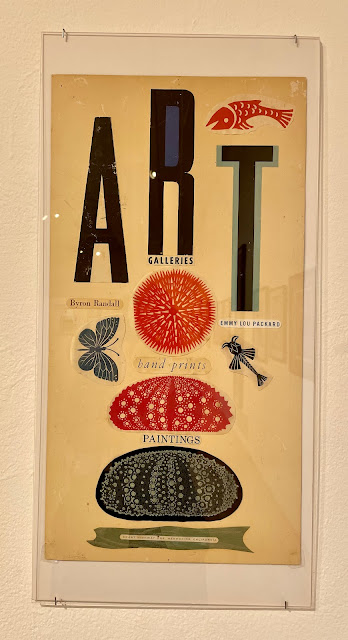 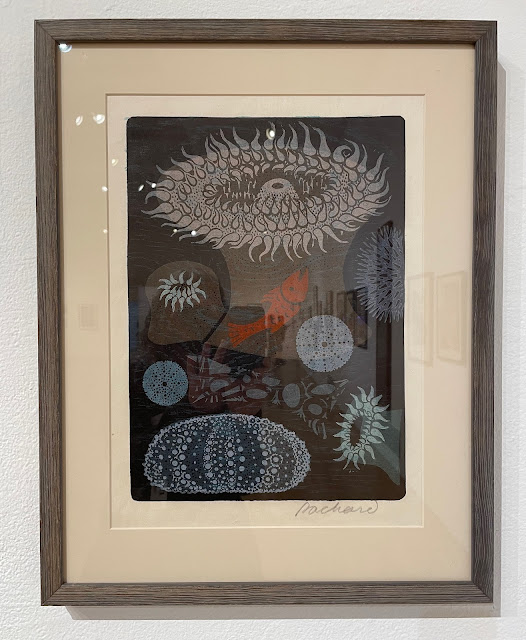 The reflected light is disturbing the piece; if you can get to the show in person, I recommend taking a closer and better look! Printing white on black is always interesting because the white ink is not entirely opaque and can take on a tint from the color underneath. (I played with this process in my book, Birds of the Bible: Vulture. Video here.)
Tide Pool, linocut, 1960s. 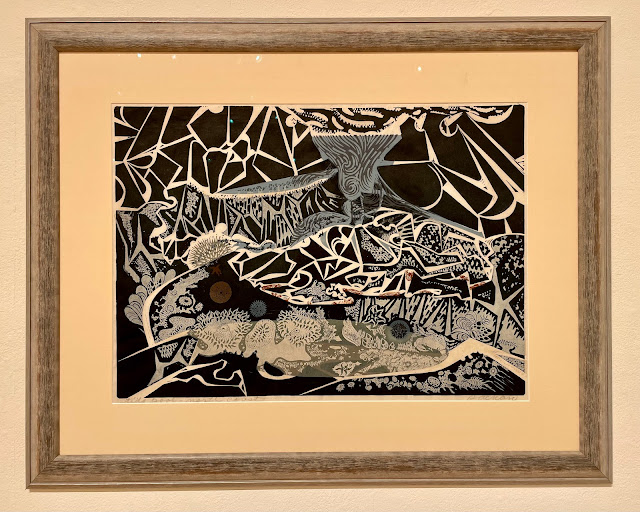 Some really bold blacks and whites with intricate creatures, patterns, details, and the white overprinting again. You can find a full range of grays in it as well.
California Morning, hand-colored linocut, 1950s. 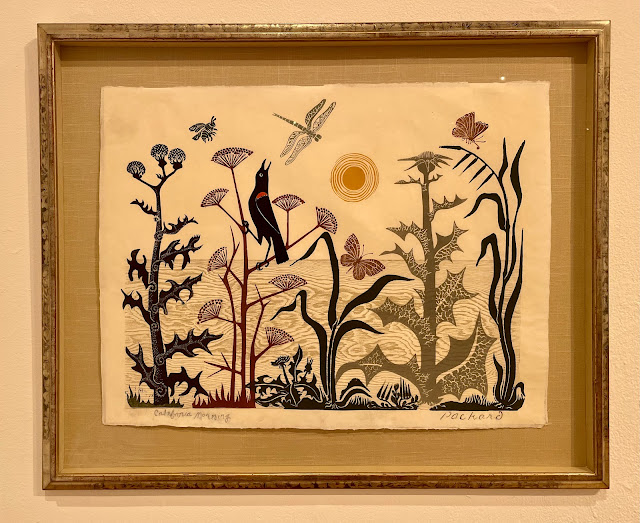 Her work is so clean: no stray marks, no smudges, every line controlled. Really nice use of the wood grain behind the print. Lots of breathing room for the plants and a radiant sun. Here's a detail of the Red-winged Blackbird. 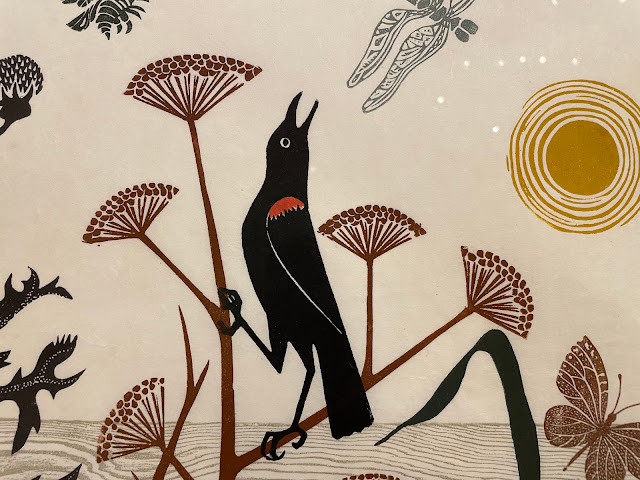 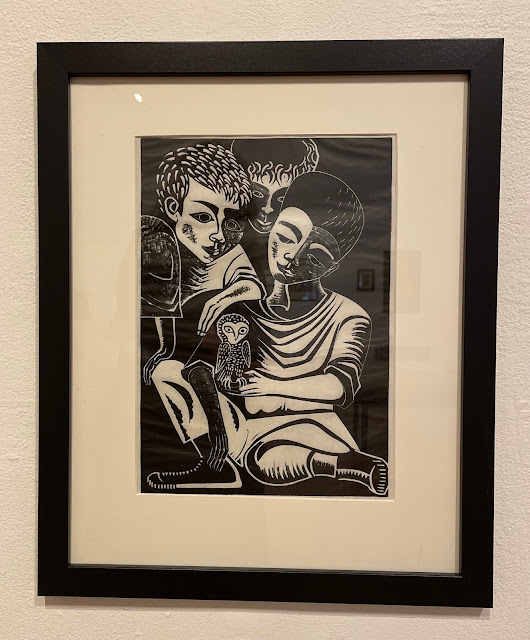 Packard taught and encouraged children of all races to make art, and she created murals and other public installations, including at UC Berkeley. Her local connection with Richmond is through the Kaiser shipyards, where she worked as a draftsperson, editor, and cartoonist during WWII. You may be able to see her work in context on the actual pages of the newspaper Fore 'n Aft at the Rosie the Riveter Museum.
Her press is featured in the exhibit as well: a simple, yet monstrously heavy, etching press. I heard that they had to build a table that would hold it and use a crane to get it in place. 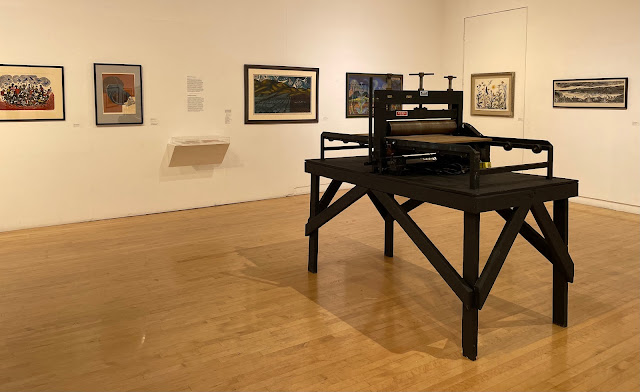 It's a thoughtful and stunning show, both quiet and strong. It shows Packard's sensitivity to materials, to all human beings, to the value of activism, and to the creatures with whom we share the world.