Autumn Sunset on the Ospreys

September 29, 2017
When we think of Fall, the word brings with it various associations: some obvious, some not so much. California urban dwellers, of which I am one, tend to see Fall marked more by stores and businesses and schools rather than by nature. But we do have trees that lose their leaves! My Japanese Maple, for one. The sycamores down the street, for another. But we don't have the skeletal silhouette skyline of, say, New York or Boston. We do have "pumpkin spice" flavored everything, which is almost always spice and not pumpkin. And weird cottony stuff people put on bushes to look like spiderwebs. We do have spiders that spin broad webs in Fall, too, though. Our hottest weather is in Fall. Every year I would make a Halloween costume for my daughter out of fleece, thinking it would be cold by the end of October, and every year I was wrong.

What has been less obvious to me are bird migration patterns. I've been aware of the Black Phoebes that are sometimes here, sometimes not. I've seen sparrows, hummingbirds, chickadees, house finches, American robbins in Winter. Our crows are year round these days.

But I've started watching birds more carefully since I became intrigued and then addicted to watching the osprey nest camera, posted by the Golden Gate Audubon Society last March. I began my viewing in May, wanting to see the eggs hatch. Apparently there were three eggs, but I came late to the party, and there were only two. I wrote a post in June, "Stories that Fly and the Osprey Web Cam." Since that time, sadly, one of the chicks fledged, was injured, was rescued out of the bay, went to WildCare for treatment, but then did not make it. That story is here. There are some great videos of dramatic little stories of the family (Richmond, Rosie, Whirley, and Rivet) here. You can watch the chicks hatch as well as see Richmond bringing a hat to the nest.

And then, it was the Autumnal Equinox, and there was just one. We believe that Richmond hangs out at Brooks Island or the spit connected to it, the channel markers, and on the dolphin (a platform in the bay, not an animal) out there. Rivet was last seen mid-August, Rosie, mid-September. Juveniles and adult females migrate south. Why migrate? After watching the ospreys bring fish after fish to the nest it is clear that there are plenty of fish in the bay. The weather is pretty temperate. But that is how it is. If you ever see an osprey with a little blue anklet that says R/Z, it is Rivet.

Watching birds leave the nest, well, that's a bit melancholy, but exciting, too. New adventures ahead. And a few osprey-inspired projects in mind. Stay tuned.

The Live Chat will be turned off shortly. But the camera remains on for a look at some beautiful sunsets over San Francisco and Marin County, and occasional glimpses of an osprey far away. All images below are screenshots from GGAS webcam.

The ospreys don't use the nest other than for raising a family, and the nest has been in use since 2012 (I think), so we'll find out if Richmond and Rosie (or others?) are back for a reprise next March, 2018. The whole life cycle, in detail, Reality Show with Ospreys. It's a great one. 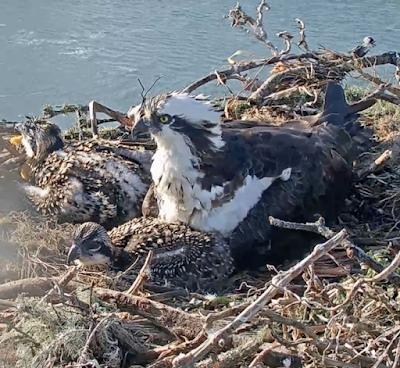 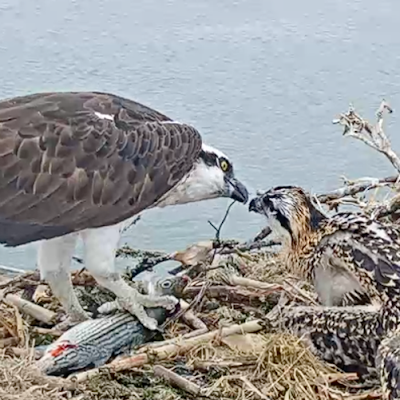 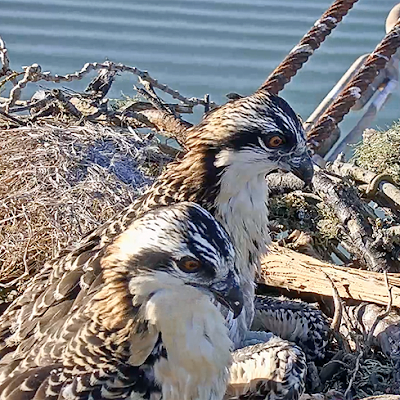 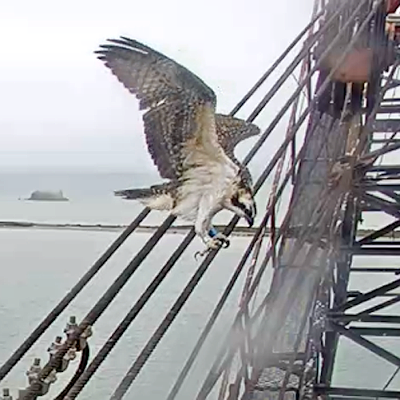 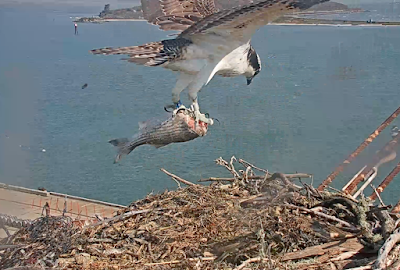 Rivet flying with partial fish that parents brought her
8.8.17 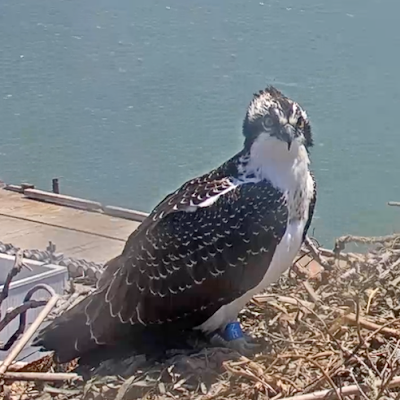 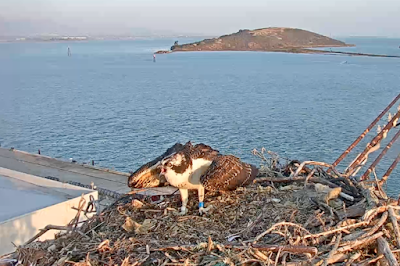 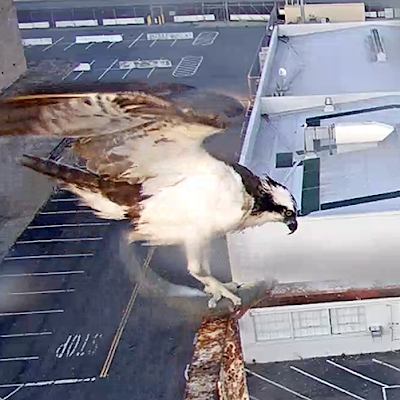 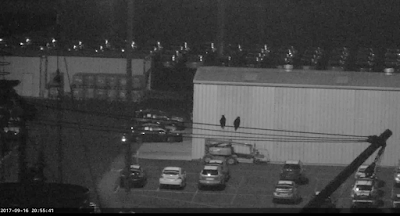 Rosie and Richmond on the Red Oak Victory ship rigging.
One of their last evenings together (we think)
9.16.17 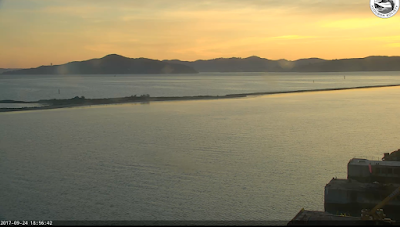 sunset over the bay looking toward Marin county
9.24.17