There Goes the Neighborhood: new work

May 21, 2018
Every time I go visit my childhood home, and my parents who live in it, I notice what has changed. It's definitely not the same city I grew up in. It has become very gentrified, perhaps considered chic. The main avenue doesn't have the nursery or the gas station or a hardware store. The local movie theater plays oldies and has special events with celebrities. But perhaps even more striking is the way the neighborhood houses have changed, as if the neighborhood was seasonal. An original house is put up for sale. Sold. A chainlink fence encircles it like a hopeful necklace. The bulldozers tear it down. And a new McMansion pushes up out of the ground in its place. There is no city style book so the blocks become eccentric melanges of Spanish villas, palatial monuments, Modern Art, Modern Ugly, and So Forth. And I do not feel the same among them. I feel like a stranger.

This feeling is likely what Gertrude Stein meant when she revisited Oakland and wrote famously, "there is no there there" in her book Everybody's Autobiography. (She lived at "Thirteenth Avenue at Twenty-fifth street" in "the old Stratton house" in East Oakland.) The full quote in Chapter 4, America: "anyway what was the use of my having come from Oakland it was not natural to have come from there yes write about it if I like or anything if I like but not there, there is no there there." She writes at length about how people are not the same people they were when they were young, when they spent time in a place long ago. She does not like seeing people she hasn't seen in many years, either. Her work takes place in whatever present it is when she is writing.

My childhood window faced the street. I spent a lot of time staring out of it. The house across the street was remodeled over the years, a second story added. But the house diagonally across just went through the seasonal cycle. Last I saw, the chainlink fence was up, the house was down. I took pictures when I saw the house was for sale. And when I visited, took a few more.

I made some solar prints of the house in its seasons onto silk organza. I also used a photo I had taken of a stick house (like Eeyore's in Winnie-the-Pooh) that was created on the mud flats at Coyote Hills. Later, I designed a page full of "there" and solar printed it as well. 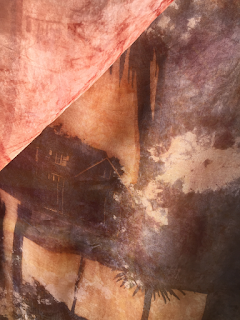 After playing with the self-stick stabilizer (see the post), I created some puzzle-like patches that would become the basis for an art quilt or curtain, I'm not sure which it is. But if you mix these two processes, beware: the Sulky Solvy chemical will interact with some of the colors of the SolarFast dye and change up the print when you dissolve the backing! This didn't happen with the Mokuba. For this, it was okay. I rolled with it. 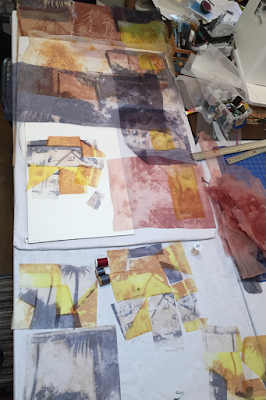 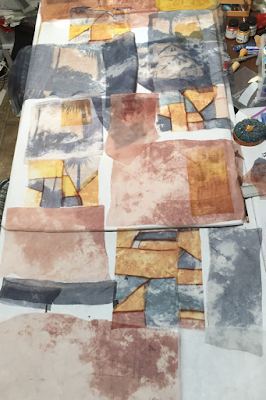 Meanwhile, as I was interested in alternate ways of sewing, the Korean style wrapping cloth, bojagi caught my attention. I found a video (she calls it "Pojagi") and began to learn how to sew these "flat seams." Off I went. Lots of machine sewing. This second video was enlightening as well, gave me a better feeling for the wrapping cloths and how they are used. This section is meant to feel like the chainlink fence. 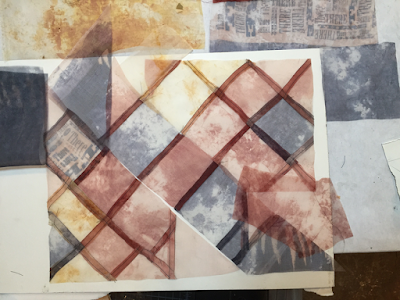 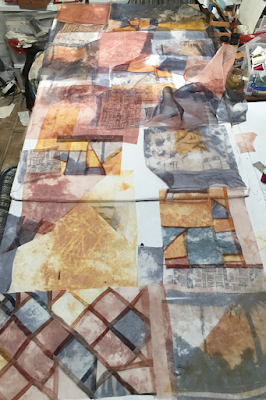 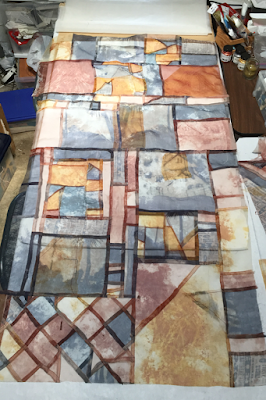 And now it is finished. I really miss hand sewing, though. 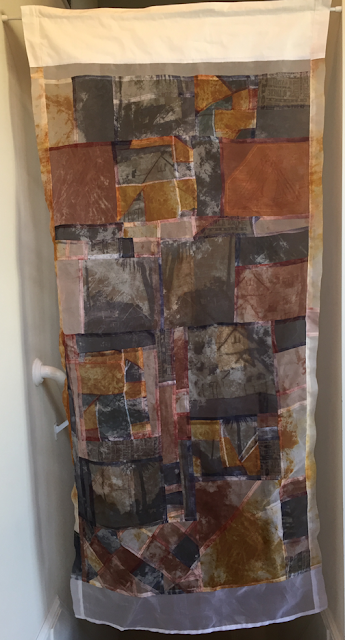 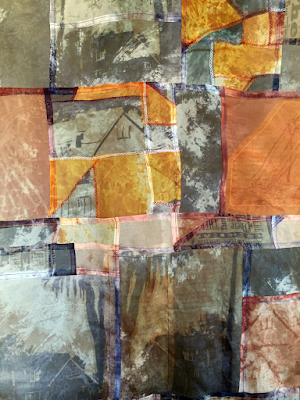 It took a while to find a place to photograph it. 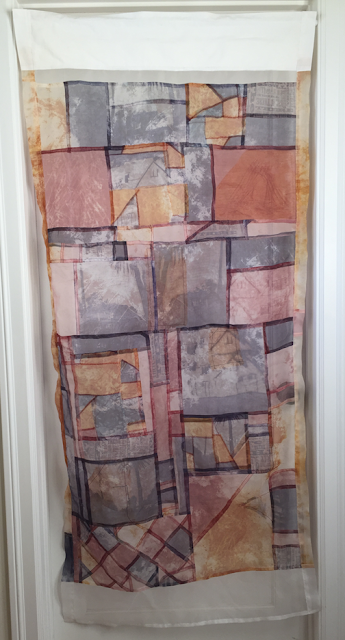 I think I like it best with light behind it. 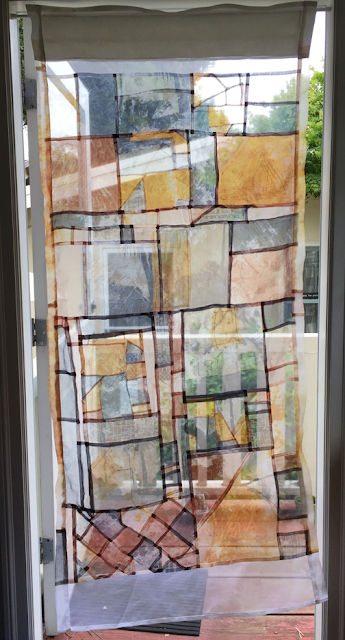 I've found a home for it in my office. For now. 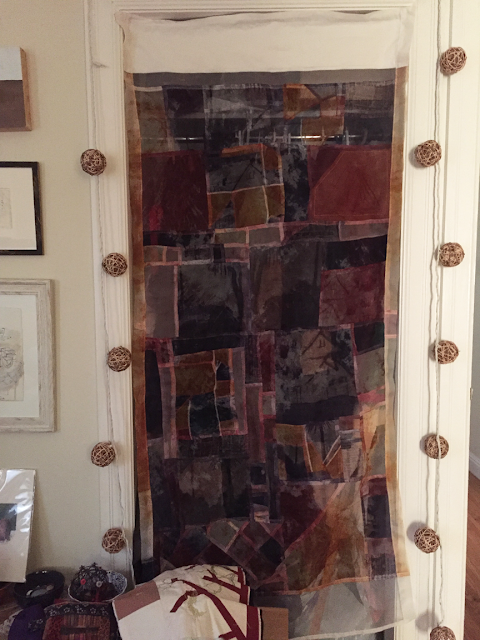 There goes the neighborhood. There it is.