September 24, 2018
I had a great time at SF Center for the Book's 2018 Roadworks steamroller printing event on Sunday, where Richmond, the Osprey was printed larger than life. The whole day felt larger than life. I'm grateful to so many people. It wasn't my birthday, but it sure felt like it. 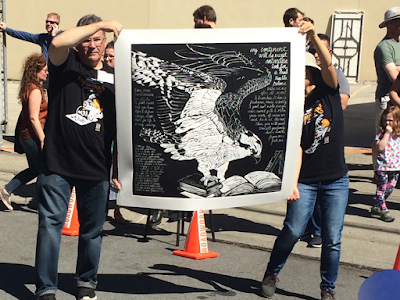 Chad Johnson held it all down, managed the printing and the volunteers, coordinated with precision. Fantastic work, truly amazing watching the process. Thank You, Chad! 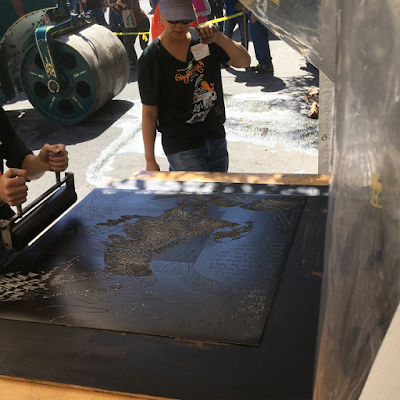 Volunteers inking up my linocut
(photo by MB) 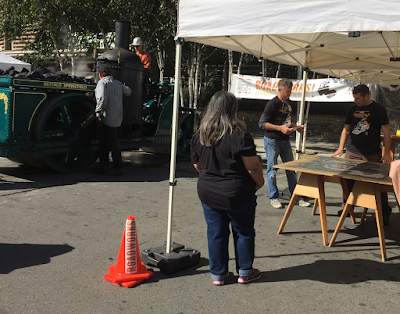 The set up: steamroller and the inking station. 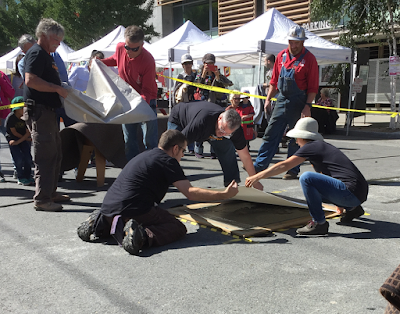 The inked up, three-foot square linoleum is placed in the street.
The Rives BFK, approximately 42" square is placed carefully over it,
directed by Chad. 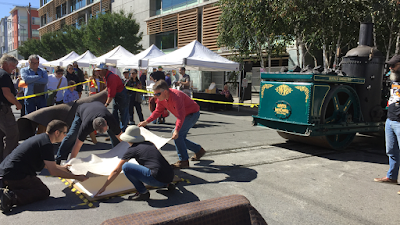 Blankets are placed on top of the paper. 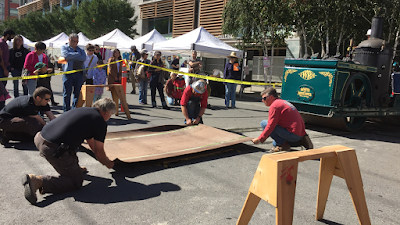 A large board is placed on the very top. It has guidelines for the steamroller. 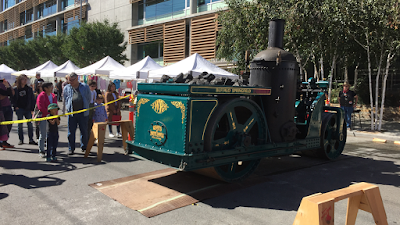 Toot! Toot! The steamroller becomes the press and rolls over the board. 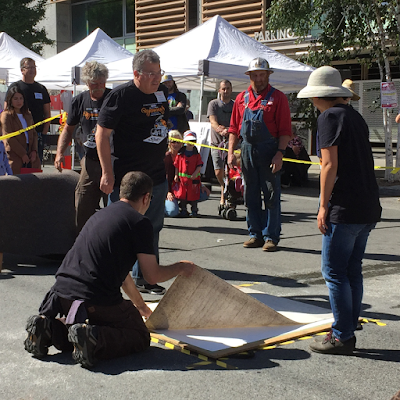 Chad removes the top blanket and calls for "clean hands!" 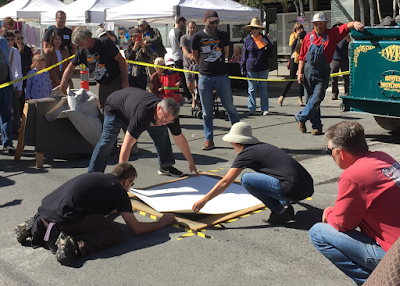 The two volunteers with clean hands begin lifting the paper at the corners
while Chad holds down the linoleum and watches carefully. Slowly, slowly.
"Pull up and out," so the paper doesn't drop and smudge on the inky linoleum. 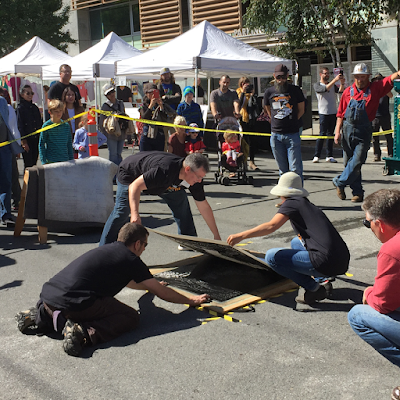 The print is almost pulled from the linoleum. 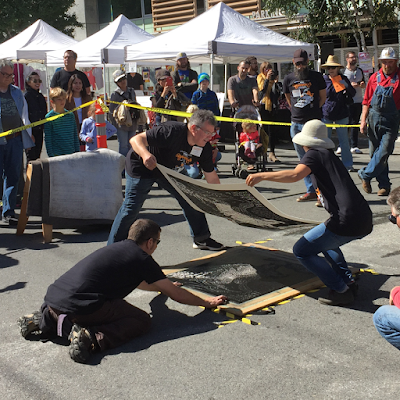 We have lift off. 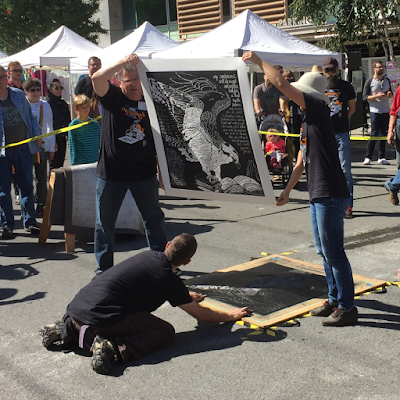 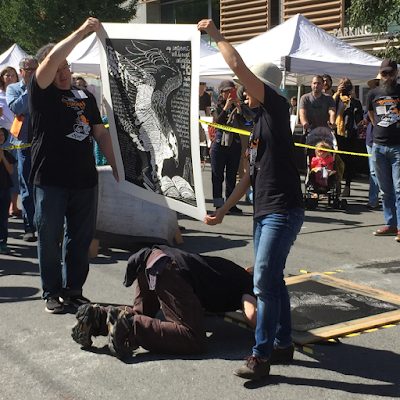 And the volunteers step over Chad to show the crowd.
(Queue limbo music.) 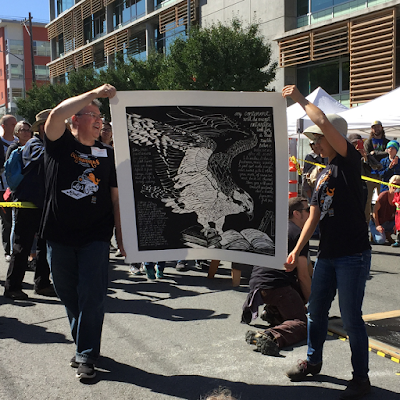 Parading with the new print. 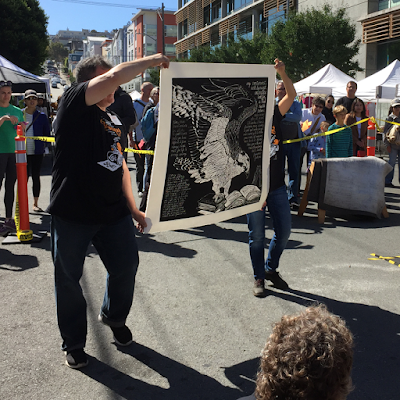 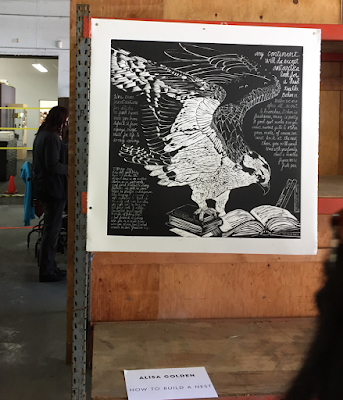 And Richie the Osprey rests and dries inside the makeshift gallery.

During the day, they rotated among the four featured 3x3 linocuts and the smaller personal prints. Eight prints were pulled from mine, "How to Build a Nest." Robin B, an Osprey chat friend, posted a video here. (You might even catch me in it.) 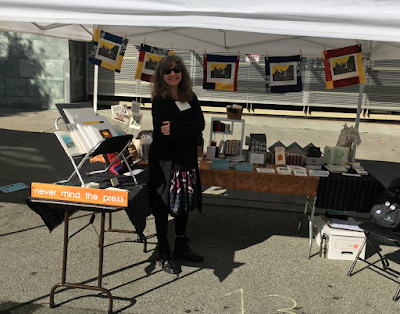 Me in front on my booth #13 (a lucky number in my family).
Most everything here is also available at nevermindtheart, my Etsy store.
(photo by MB) 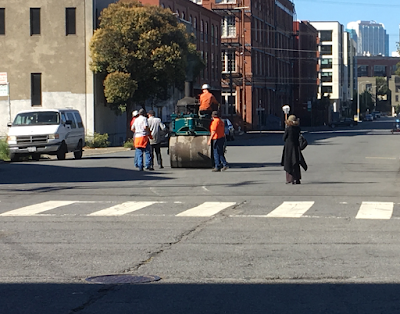 The day sped by. Then, at 4pm, the steamroller rolled off into the sunset.
(photo by MB)

Thanks to the San Francisco Center for the Book staff,
to my Osprey chat (and other) friends,
to Golden Gate Audubon Society,
and to MB for assistance.

*
I only bought one thing: a pair of book earrings from Linda.
It was her first time at the fair.
I didn't see a website listed, but you can contact her through gmail, it looks like.
They are made very well. 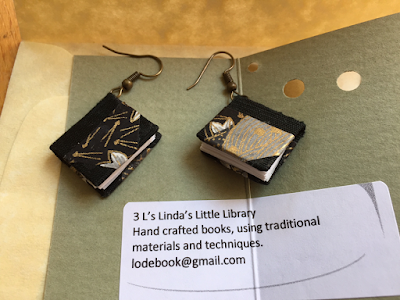 Thanks a bunch for the shout out!
See you next year?

dinahmow said…
What a great print! Some friends recently did a roller print.Here is a link if you are interested https://moreidlethoughts.wordpress.com/2018/07/30/ideas-on-how-to-pass-a-sunday-afternoon/
September 25, 2018 at 12:30 PM

silktangles said…
AH......wonderful. I bet the print is awesome in the flesh. You continue to amaze me with your creativity.
viv

Alisa said…
Linda O—You are welcome! I wore my earrings yesterday. Do you have a website or Etsy store?
dinahmow—Thanks! What a cute little steamroller! I'll take it. But where can I store it?
viv—Thank you so much!