Form and New Work: Where Is My Home When My Home Turns Against Me?

October 14, 2018
The creative process can be frustrating, mysterious, and joyful. Part of the process for me is answering the questions, "What do I want to say?" and "What do I want to make?" Once those are decided, the larger work begins. This past year I've been making work specifically to submit for consideration to themed shows, so at least I've had a starting point: a subject. But from what angle? And which form will it take? What stirs me up so much I have to express it? So many questions must be investigated.

The theme was "Forced to Flee," in the most general sense, a look at immigration. I began with some solar prints of a photograph I had taken of people walking and standing around: the feet. I had other photos of things left at the curb, lamps and books, so I made prints from those as well. My goal was to make a kind of checkerboard with positive and negative images and in two different colors and to make all the corners line up, a technical challenge as well.  I did that, for the most part, and then was stuck; the little patchwork was pretty small. Luckily, I started this project months in advance. All the printed cloth went into a bag, and I put it away. For the moment. To incubate. 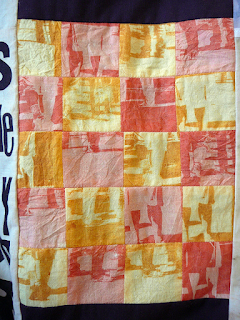 I re-read the call for entries. I thought maybe I would do a map of the world, stitched lines connecting and crossing, but the idea sat limp with me. Then our world changed again when it became clear that immigrant children were being separated from their parents at the U.S. borders. Immigration policies and realities were even more in the forefront. And that seemed so important, but also so fraught.

Eventually, I found it was the form that wasn't working. I wanted to put a face on the individual, what it feels like, and how it connects to those who are physically safe in their own houses, or to those not safe in homes for psychological or emotional reasons. And then there were the fires in northern California. So much displacement for so many different reasons. A garment seemed a better fit. A jacket or coat. With pockets. Imagining running out the door and stuffing things inside. A garment to cover a person, to house a person, to serve as a shelter, perhaps. And as a metaphor.

In the 1990s, I had made a couple of Japanese-style hanten jackets from a book I no longer own, Make Your Own Japanese Clothes: Patterns and Ideas for Modern Wear. I still had the jacket I made for myself, so I pulled it out and studied it. 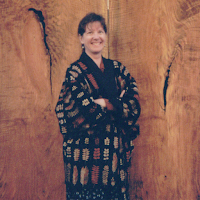 It was tricky to copy. But I remembered that it used cloth efficiently, in rectangles, even the special triangular-looking sleeves, so I decided to go ahead with it. I thought about scraps and things left behind, collected and discarded, and I printed wood type on the cloth I had eco-dyed (a post about the method here) and used those pieces. I also created some new scrap collages with my scrap colors (a post about the technique here). 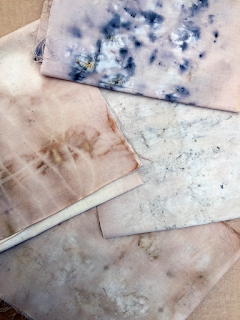 It needed some stitching. My slow brain couldn't remember a word and looked it up as I visualized it: "marking time with lines of bundled sticks." Tally marks! Of course. How we count, how we began to count long ago when fingers and toes weren't enough. Groups of fives. I stitched those with the eco-dyed linen thread on the lighter side of the front panel, then added the natural color for variation. I like the look of marks and irregular lines to show the hand, that a person was here. 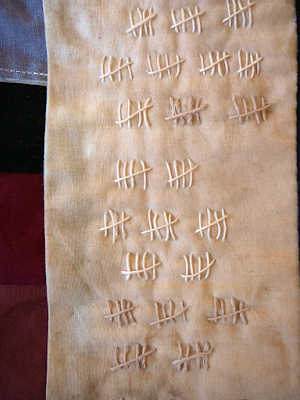 And in a graphite gray on the darker side of the front panel. 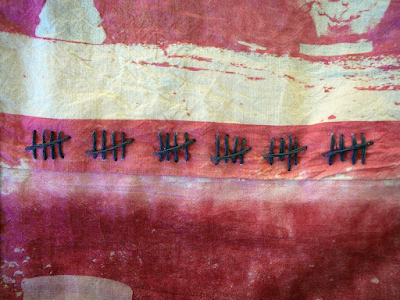 A long, slow hand-sew on the collar. 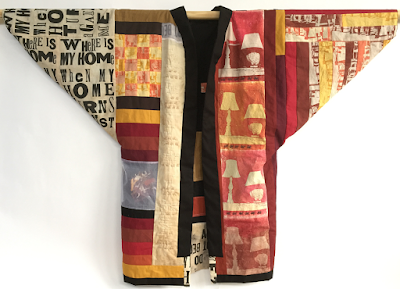 In this case, the form was all important to firing up the creative process. It just didn't want to be a rectangle.

The back panels are printed: "Other / Mother / Brother / Another." I also wanted it to embody human dignity. Inside, there are pockets, and the inner bottom panels say: "I ask / I do not beg." 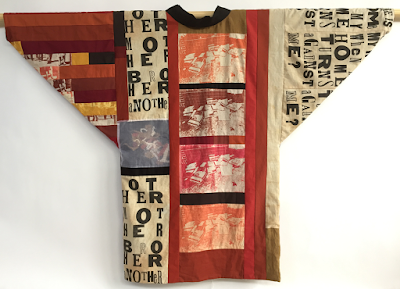 Any of us could be in this position, as Other, as traveler against our will, a stranger. And even if we weren't, then perhaps we could step into another's clothes and understand what it means to ask,
"Where Is My Home When My Home Turns Against Me?"
That's what stirs me up.

jac said…
I think you've nailed it. A piece that's beautiful to look at, that draws you in, and that, with the notes to explain the design choices, makes perfect sense as a statement about having to leave. Wish I could see it for real, not just on screen
October 15, 2018 at 1:18 AM