November 19, 2018
In 2016, I saw a color image in the New York Times that caught my eye. The deep blue against the chartreuse compelled me to study the caption, part of this article, "The 40,000 Mile Volcano." 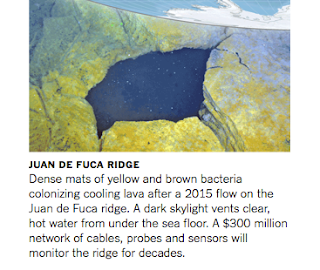 Reading about it caused me to include it in my project, HOUSEWORK. Undersea volcanoes and the living creatures that thrive deep below the Pacific Ocean in a neighborhood all their own and foreign to us fascinated me. When the call came out for the theme, "Shifting Tides," quilts pertaining to the Pacific Ocean, the Juan de Fuca ridge, which is where this life exists, was what I wanted to work with.

I started in June with the painted and crinkled silk cloth I had made and written about later here. I liked the pieces in a grid and tried making some oceany piecings around the grid. The project stalled. 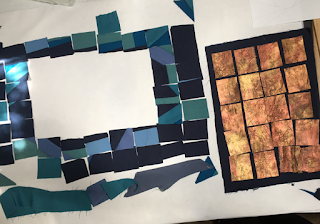 Until November, when I did more reading and writing about the Juan de Fuca Ridge.
I printed wood type via letterpress on cotton scraps and the eco-dyed cloth I had made here. 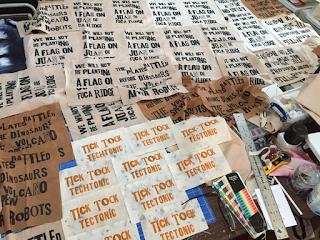 I also had experimented with clamping a metal circle (some people use coins) to a folded cloth and dyeing it, making moons or X-rays, and that resulting cloth wanted a role in the quilt as well. When I was in the quilt store New Pieces to get a little fabric for patching a bed quilt I found this swirly smoky blue cloth that was better than anything I could dye or print. I could definitely use this for the undersea volcanic "black smokers." The materials were finalized. 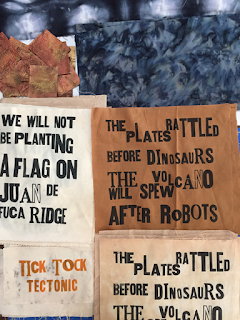 The form was not. 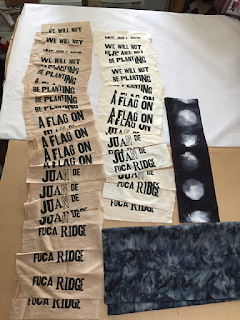 And then, after a few days of rearranging, it was. 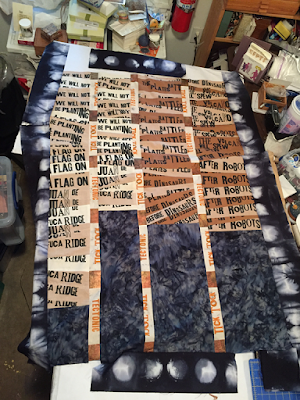 Fragmenting the printed cloth, like reading in an earthquake, appealed to me.
The moons or X-rays or albino animals at the bottom of the sea became the border.
The metallic painted and crinkled silk became accents to help organize it. 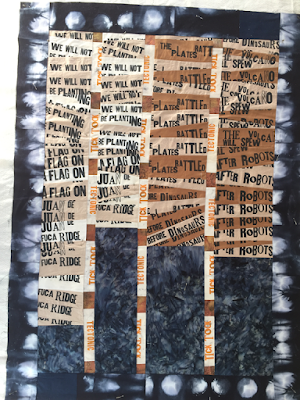 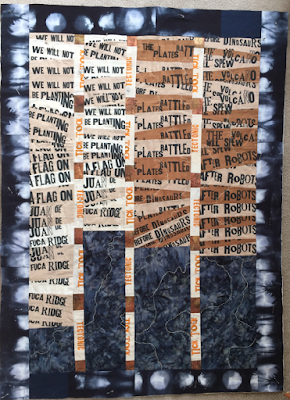 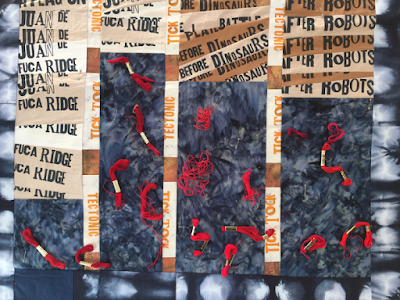 Red was calling me. The giant deep-sea tube worms are red. 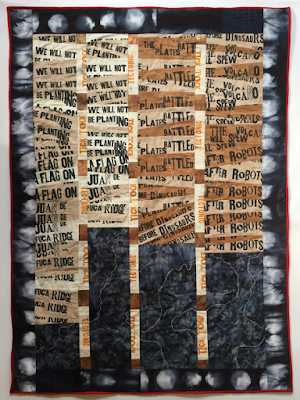 I tie-dyed/tea-dyed some red cloth and made the binding. 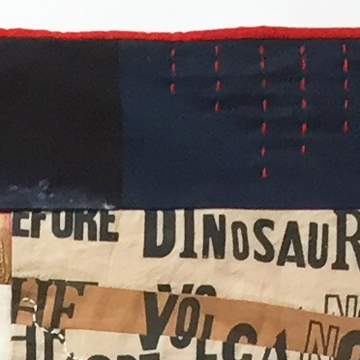 And stitched a little red volcanic activity top and bottom. 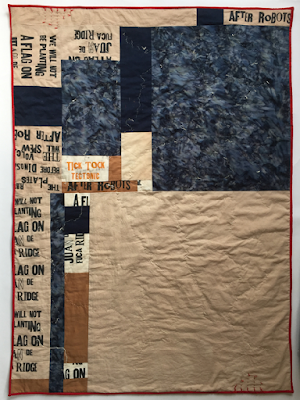 The back used up the scraps. 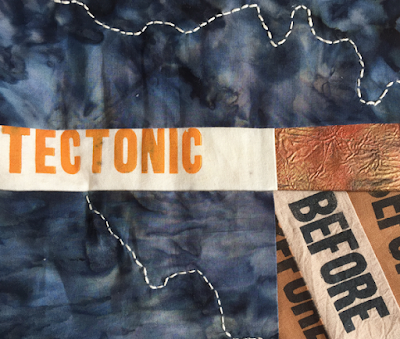 Deep in the Pacific Ocean, where plates collide below the cold, earth’s kitchen builds lava chimneys, black smokers, and a hot hearth hosting life that lived before us and hopefully ever after. That is, unless we pack probing tools and take a wrong turn—intent on dredging and stealing minerals, claiming magnesium, cobalt, and maybe a little gold for our own. While humans are just dots on a timeline, we can still impact what happens to our collective home. 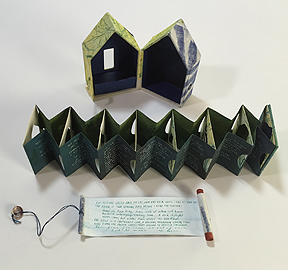 We will not
be planting
a flag on
Juan de Fuca ridge.

The plates rattled
before dinosaurs.
The volcano will spew
after robots.