April 15, 2019
Long ago, I found my then-young daughter in the living room dressed in her dancing clothes, posing and swirling a long chiffon scarf. Puzzled, I asked what she was dancing to. "The sound of water dripping." She heard the kitchen faucet; I had to listen.

After I took the marbling workshop a few months ago, I began studying the patterned fabrics again. I've learned not to force a project, but to listen to what the materials want to be. Marbling is all about water. Inks float on a thickened mixture. Marbling on cloth with the traditional European technique reminded me of classical music: the flow of the colors, the rhythm of the pattern. I had chosen three colors and limited myself to them like harmony or a chord, or a three-chord progression.

Continuing the thought, I made blocks of three-fabric strips and looked up Handel's "Water Music." I found that in 1717 he had been asked by King George I to compose a work to be played on a barge that would float up the Thames river. The music beckoned to so many people, it was reported that the water was covered with boats and barges so everyone could listen.

Music crosses borders and times; the past influences the present, reshaped and renamed. I improvised with what seemed to be classical chords to create modern jazz or contemporary style, a little of Handel meets Steward Copeland (the drummer from The Police) or Steve Reich, bring the past forward, but changing it. Thinking about my dancing daughter, I quilted concentric circles, water drops rippling and reverberating outward to touch and sustain me and us all. 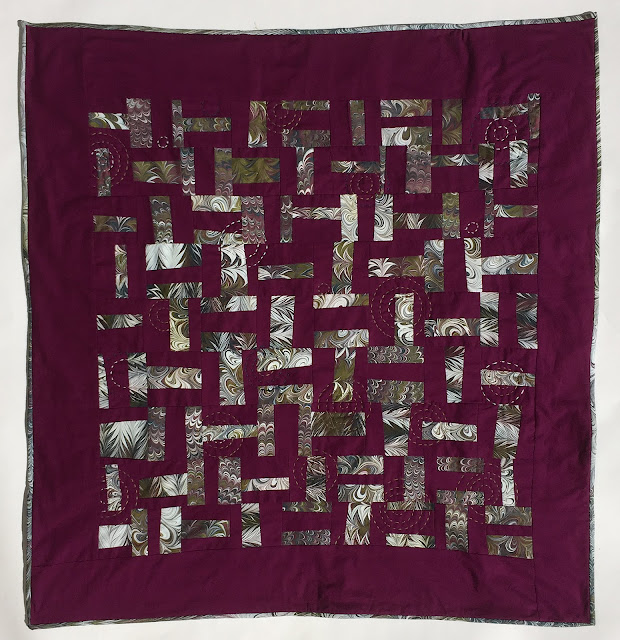